Click the following link for a safe PDF copy: Shaykh Abū Muḥammad al-Maqdisī — About the Taliban Negotiations With the Apostate Kabul Government in Doha 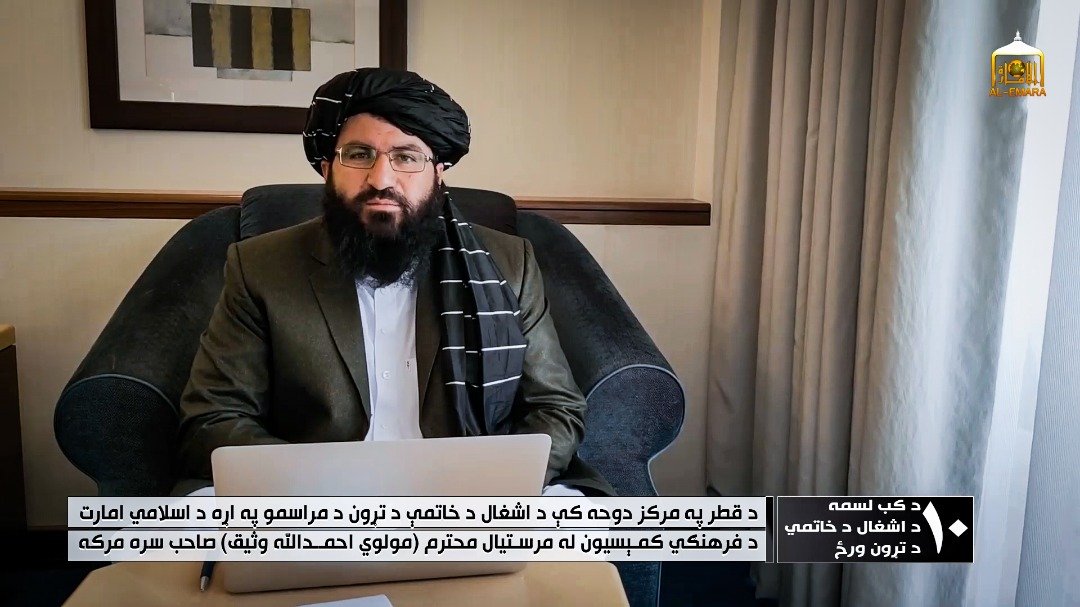 An intra-Afghan conference was scheduled to take place on the 20th and 21st April in the Qatari capital of Doha but has now been cancelled. We deem it necessary to make the following clarification: 1 – A decision was made during the Moscow conference on 6th of February that a similar conference will again be held in Qatar. The Islamic Emirate is still committed to that policy and pledge of an identical conference being held; rather the Islamic Emirate went a step further by agreeing to allow an even larger number of male and female compatriots to attend when compared to the Moscow conference. It was agreed that all participants of the conference shall declare their own personal views regarding the Afghan issue however the Kabul administration officials launched efforts to introduce this conference as a negotiation’s meetings between the Kabul administration and the Islamic Emirate, a position in conflict with the policy of the conference. 2 – All participants attended the Moscow conference in a personal capacity and the upcoming Qatar conference was also planned with similar guidelines from the very first day. Both the hosts of the conference and Qatar made it clear and even stipulated this point in the invitation letters that all individuals shall partake in personal capacity but the head of Kabul administration (Ashraf Ghani and another official Umar Daudzai) repeatedly held press conferences and declared that members selected by them shall participate as representatives of the Kabul administration, a clear attempt at sabotaging this conference and peace efforts. 3 – Just as all the arrangements for the conference were finalized, the Kabul administration officials launched their own bizarre meetings inside the Arg palace, announcing their red lines and conditions, claiming host status for the conference, filing and publicizing a participant list not only ill-suited for the conference site and situation but also having not chance of being accepted. And the strangest of all was the publication of this list before even sharing or reaching an understanding or agreement with the conference hosts, deliberately creating turmoil. 4 – At a time when the policy of the Islamic Emirate is absolutely clear that the initial stage of the negotiations process shall resolve the foreign aspect of the issue – meaning the complete withdrawal of foreign forces from Afghanistan as dialogue with the powerless and crumbling Kabul administration is a waste of time.

5 – The Islamic Emirate of Afghanistan reassures its oppressed nation and the world that the Islamic Emirate has made use of absolute patience. The Political Office and Negotiation Team headed by the respected Mullah Baradar Akhund worked day and night, exercised self-restraint and showed flexibility in policy to the highest level; but since Kabul administration officials and secret circles created obstacles for this effort therefore its responsibility also falls upon their shoulders. The Help of Allah and support of nation shall remain with us and the enemies of peace shall themselves come to understand that they miscalculated and were wrong. 6 – In the end we thank all individuals and parties especially the distinguished Qatari officials, officials of Center for Conflict and Humanitarian Studies and sincere peace activities inside the country who aided in this process and tried their best till the very end, may Allah (SwT) reward them for their efforts, specifically those who prepared themselves for the conference. Those eminent personalities who went to Kabul from adjacent provinces and some who even arrived at Doha, we show our utmost appreciation for all their efforts and hope for further resolve in their future efforts. The Islamic Emirate shall continue its legitimate struggle until true peace prevails and an intra-Afghan Islamic system is established, Allah willing.

The Kabul administration has published a list of 250 participants for the said conference but the hosts of this conference have no plans of accepting so many people from Kabul and neither is such participation normal in such conferences.

Only a limited number of political and national figures from this list are selected for the finalized list and only they shall be participating.

The creators of Kabul list must realize that this is an orderly and prearranged conference in a far-away Khaleeji country and not an invitation to some wedding or other party at a hotel in Kabul.

Arranging and publishing such lists signifies that the Kabul administration fears these conferences and progress towards peace and is trying to be a spoiler with such actions.

Amid the ongoing talks between the negotiation teams of Islamic Emirate and United States in the Qatari capital of Doha, extensive discussions were held about the method of foreign troops withdrawal from Tuesday till Wednesday noon and from that time onwards, discussion revolved around preventing Afghanistan from being used against others. The meetings ended last night as both negotiation teams agreed to take a break today and tomorrow for consultations and preparation for the third meeting which shall be held on Saturday.

Meanwhile the Political Deputy of Islamic Emirate, the respected Mullah Baradar Akhund, met with the deputy Prime Minister and Minister of Foreign Affairs of Qatar Abdul Rahman al-Thani, National Security Advisor Muhammad al-Masnad, US State Department’s Special Representative Zalmay Khalilzad and commander of occupying forces in Afghanistan Scott Miller. The meetings focused on discussions about the ongoing negotiations process and withdrawal of foreign forces from Afghanistan. Respected Mullah Baradar Akhund clarified the policy of Islamic Emirate regarding foreign forces withdrawal and changing situation of Afghanistan while emphasizing our committed to the current peace process along with peace and establishment of an Islamic system in Afghanistan.

The meeting between the United States and the Islamic Emirate commenced on the first day of the fifth round of talks of the negotiations process in Qatar.

The respected Mullah Baradar Akhund arrived to the meeting yesterday on the 24th February after a formal invitation by the Foreign Minister of Qatar and in a private airplane sent by the said country where he was warmly received by the Ministry of Foreign Affairs of Qatar and members of the Political Office of Islamic Emirate.

It should be mentioned that the negotiations process will be advanced by Al Haj Sher Muhammad Abbas Stanekzai, the head of negotiation team of Islamic Emirate, and guidance will be sought from the respected Mullah Baradar Akhund when necessary.

A number of media outlets have again begun a propaganda campaign regarding negotiations process with the United States.

Reuters news agency again tried to spread propaganda against the Islamic Emirate by publishing a report listing reasons for non-participation by the deputy of Islamic Emirate Al Haj Mullah Baradar Akhund in the upcoming Qatar meeting.

Reuters news agency had also previously published propaganda by a number of their biased journalists that were later proven as fabrications and seriously damaging to the reputation of Reuters.

This time around Reuters quoted unknown sources as saying that the reason for non-participation by Al Haj Mullah Abdul Ghani Baradar is due to disagreement among the ranks of Islamic Emirate about him.

We strongly reject this propaganda.

A meeting will take place between the negotiation team of Islamic Emirate and US representatives in Qatar and Allah willing, it will prove positive.

However, the respected Mullah Abdul Ghani Baradar will not participate in the meeting because he announced a negotiations team, introduced its leader and members and authorized it to carry out negotiations with the United States.

Since Al Haj Mullah Abdul Ghani Baradar is the Deputy of the Islamic Emirate in Political Affairs and there was an absence of his peer in the US team hence no need was seen for Mullah Baradar Akhund to participate in the meeting.

All other rumors in this regard are baseless reports that only seek to confuse common thought and should not be given any worth.

The meetings taking place for the past six consecutive days in the Qatari capital of Doha between the negotiation team of Islamic Emirate and the United States finally came to an end today.

In accordance with the agenda, this round of negotiations revolving around the withdrawal of foreign troops from Afghanistan and other vital issues saw progress; but since issues are of critical nature and need comprehensive discussions therefore it was decided that talks about unsolved matters will resume in similar future meetings in order to find an appropriate and effective solution and also to share details of the meetings and receive guidance from their respective leaderships.

The policy of the Islamic Emirate during talks was very clear – until the issue of withdrawal of foreign forces from Afghanistan is agreed upon, progress in other issues is impossible.

In the end the delegation of the Islamic Emirate thanked Qatar for their facilitation role.

Reports by some media outlets about agreement on a ceasefire and talks with the Kabul administration are not true.

Following American acceptance of the agenda of ending invasion of Afghanistan and preventing Afghanistan from being used against other countries in the future, talks with American representatives took place today in Doha, the capital of Qatar.

The session will also continue tomorrow.