NOTE: For prior parts in the Hizballah Cavalcade series you can view an archive of it all here.
—
Asa’ib Ahl al-Haq’s Liwa’a Kafeel Zaynab
By Phillip Smyth ([email protected])
Click here for a PDF version of this post 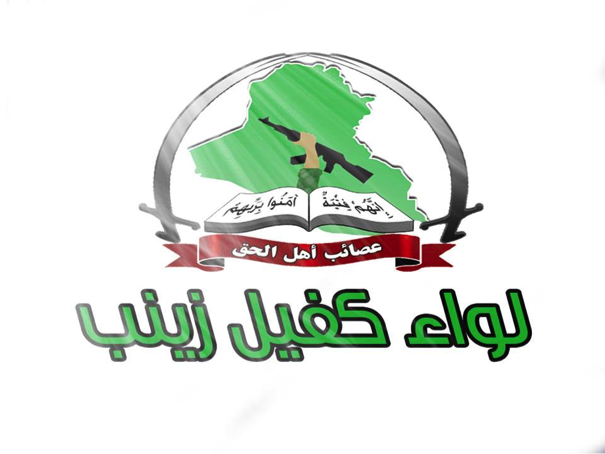 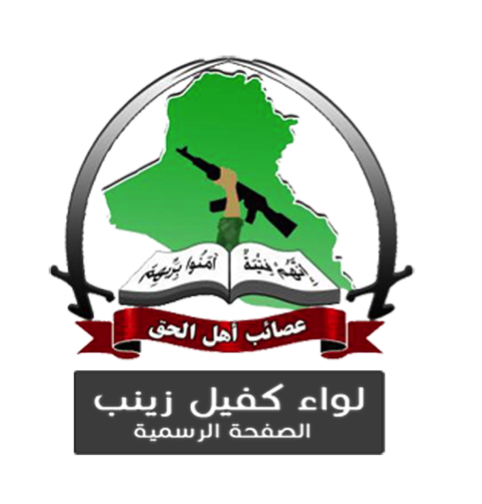 Figure 2: AAH-LKZ’s symbol features the normal AAH logo with the words, “Liwa’a Kafeel Zaynab” below it. This photo comes from AAH-LKZ’s official Facebook page (as denoted by the writing, “al-Safa al-rasmeea”, meaning “The official page”, underneath “Liwa’a Kafeel Zaynab”).
Formed in 2006 when it split from Muqtada al-Sadr’s Jaysh al-Mahdi, the Shia Islamist, Iraq-based Asa’ib Ahl al-Haq (League of the Righteous, or AAH) was created with the help of Lebanese Hizballah and the Iranian Revolutionary Guard Corps.[1] During the Iraq War, AAH was responsible for a number of high-profile attacks on Coalition forces, including kidnappings and the use of advanced Explosively Formed Penetrators (EFPs) against armored vehicles.[2] Following the pullout of American soldiers from Iraq, the group claimed it would consider giving up its arms and pursue a political strategy.[3] However, despite allying itself with Iraqi Prime Minister Nouri al-Maliki, AAH retained its militia and has been sending some of these forces into Syria.[4]
When the first martyrdom announcements and funerals were held for Iraqi Shia who had been killed fighting for pro-Assad militias in Syria, it became clear that AAH was a main supplier of fighters (see earlier Hizballah Cavalcade “Roundups of Iraqis Killed in Syria” Parts 1, 2, and 3). Via these funeral announcements, the makeup of the main foreign-staffed Shia militia in Syria, namely Liwa’a Abu Fadl al-Abbas (LAFA), was shown to be from AAH. AAH did little to hide their involvement regarding their sending of fighters to Syria. Large public funerals have been held in Iraq since the spring of 2013 and numerous AAH propaganda posters featuring their involvement in Syria have been released.
Albeit, it was a rarity for groups like LAFA to make an official written statement over social media or on forums stating AAH was a supplier. Instead, the inference AAH was supplying fighters to the group could be made by looking at the AAH imagery for their dead, which was then reposted by LAFA.
However, starting at the end of May, 2013 a number of videos (posted to YouTube) explicitly claimed Asa’ib Ahl al-Haq’s fighters were in Syria. This differed from the more typical rolling of AAH personnel into the ranks of LAFA or other militias. While these videos were sporadic, they were the first piece of a trend which would culminate in the announcement of a unique organizational name for AAH’s force deployment in Syria.
The major shift in addressing AAH’s involvement in the war in Syria took place in July. Instead of claiming AAH members were part of other Shia militia groups, AAH decided to announce the presence of the Asa’ib Ahl al-Haq-Liwa’a Kafeel Zaynab (AAH-LKZ or League of the Righteous-Supporters [or Sponsors] of Zaynab Brigade). The group is not a “New militia”. Instead, AAH-LKZ is a name for the group of AAH personnel who are in Syria. In some ways, it is comparable to how some militaries have fielded expeditionary forces.
As soon as the AAH-LKZ was announced on Facebook, the group also released a number of films on an official YouTube page. AAH-LKZ’s Facebook page also has (since the last count on August 13, 2013) three mirror sites. This is likely due to the fact that many Hizballah and Liwa’a Abu Fadl al-Abbas Facebook pages have been banned by the website.
AAH-LKZ has been quite prolific in their postings of unique photographs showing the group’s operations in Syria. In some cases, the main page (which has around 33,000 members) has posted five unique photographs in one day. Compared to other Shia militia Facebook pages, such a release of original images is quite uncommon.
Primarily, AAH-LKZ’s military maneuvers utilizing snipers and machine-gun teams are showcased. Additionally, their use of mortars, rockets, and possibly armored vehicles has also been featured. Photos of the group’s martyrs are also posted on the page.
AAH-LKZ has also posted a number of propaganda videos on an official YouTube station. Many of the videos mock Syrian rebels, showing mishaps the rebels have had with their weapons or rebels being successfully attacked. In a surreal twist, AAH-LKZ starts all of their officially released videos with a clip the group’s video editor(s) cut from the Mel Brooks’ 1987 comedy, Spaceballs.[5]
AAH-LKZ’s Imagery & Videos From the Battlefield 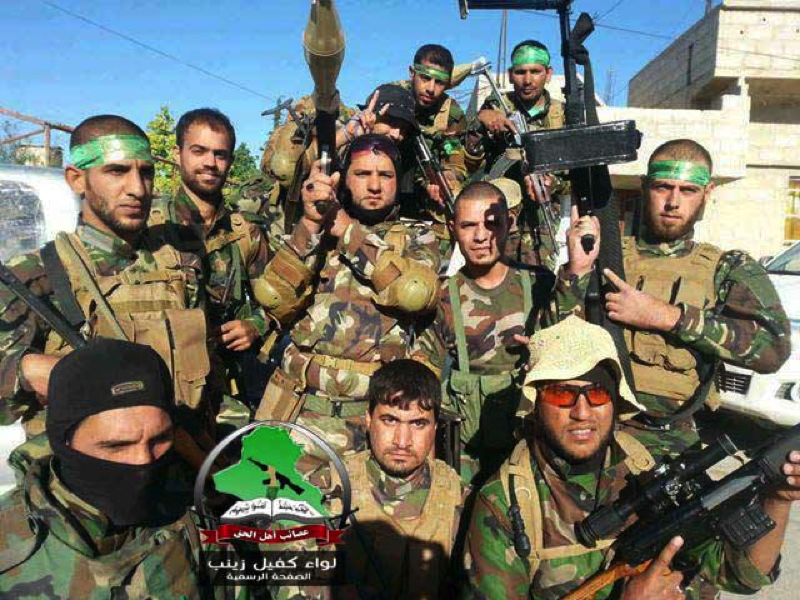 Figure 3: AAH-LKZ members pose with a mixture of Kalashnikov-type rifles, Dragunov-type sniper rifle, an RPG-7, and a PKM machine gun. 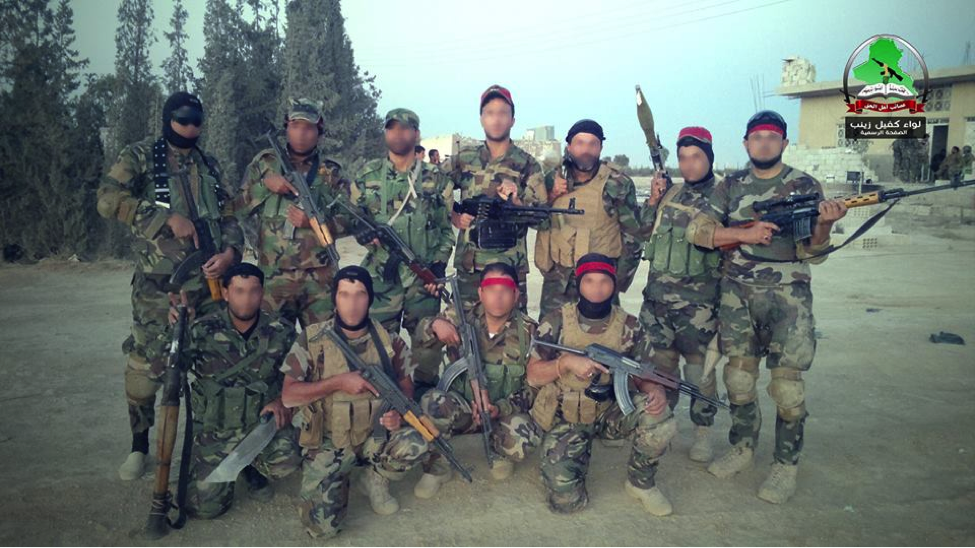 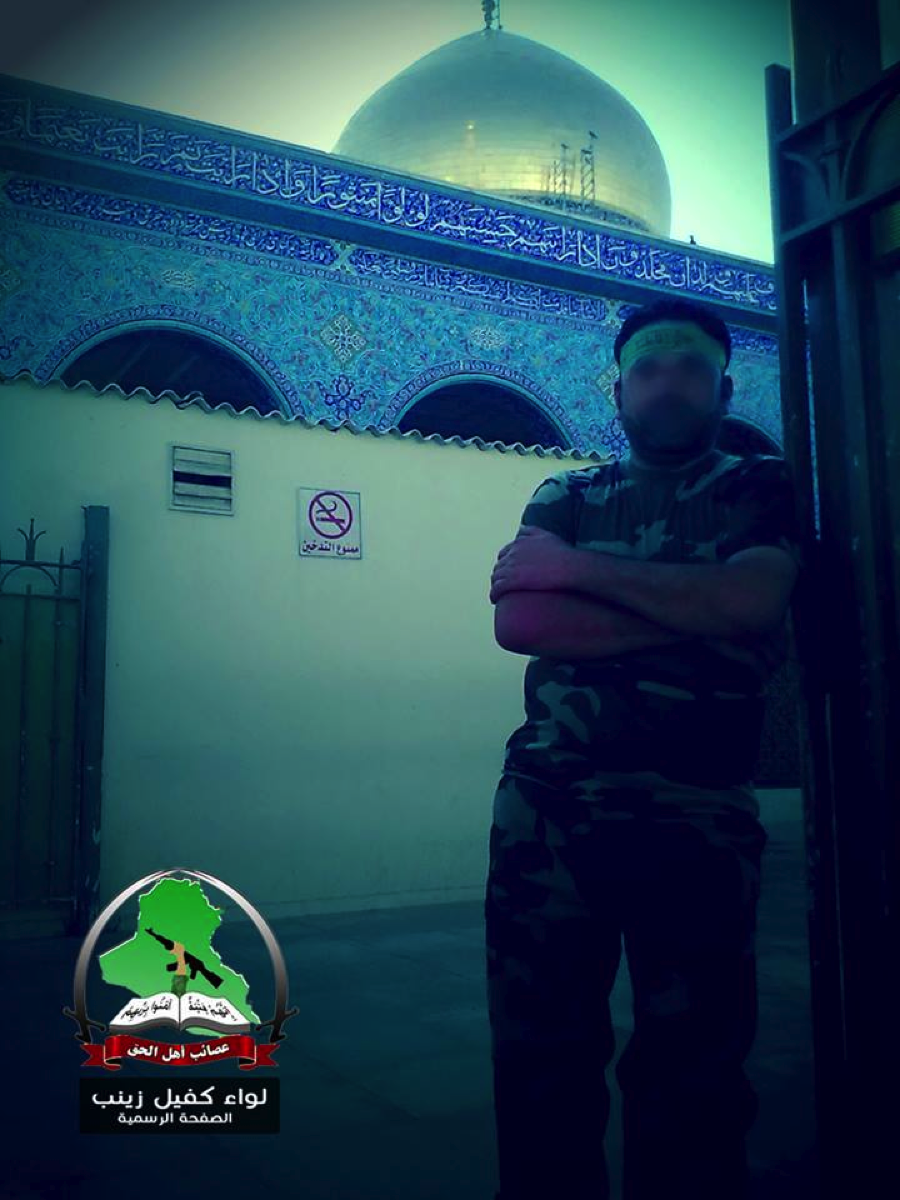 Figure 5: An AAH-LKZ fighter stands with the Saydah Zaynab Shrine in the background. 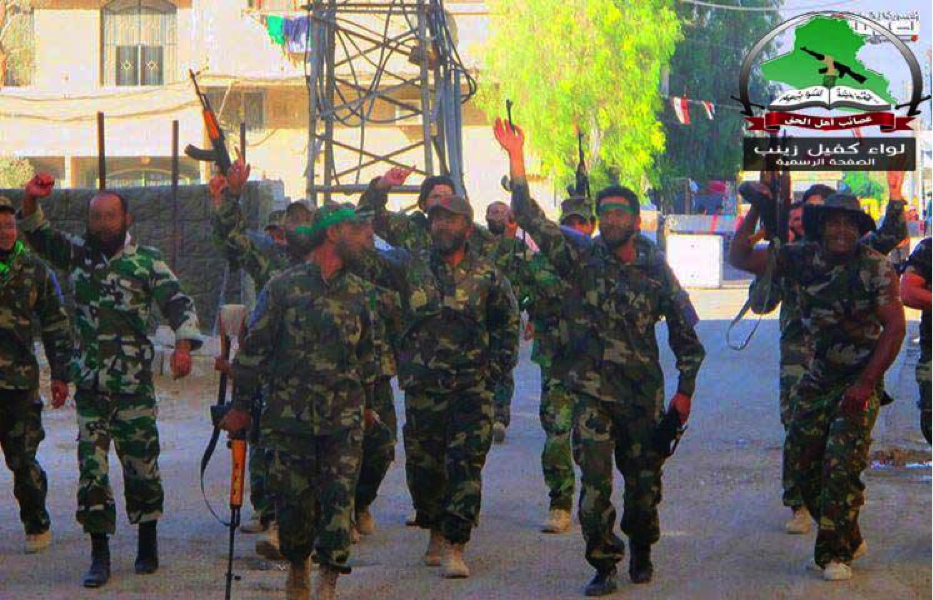 Figure 6: A shot of AAH-LKZ fighters celebrating in a Syrian street. 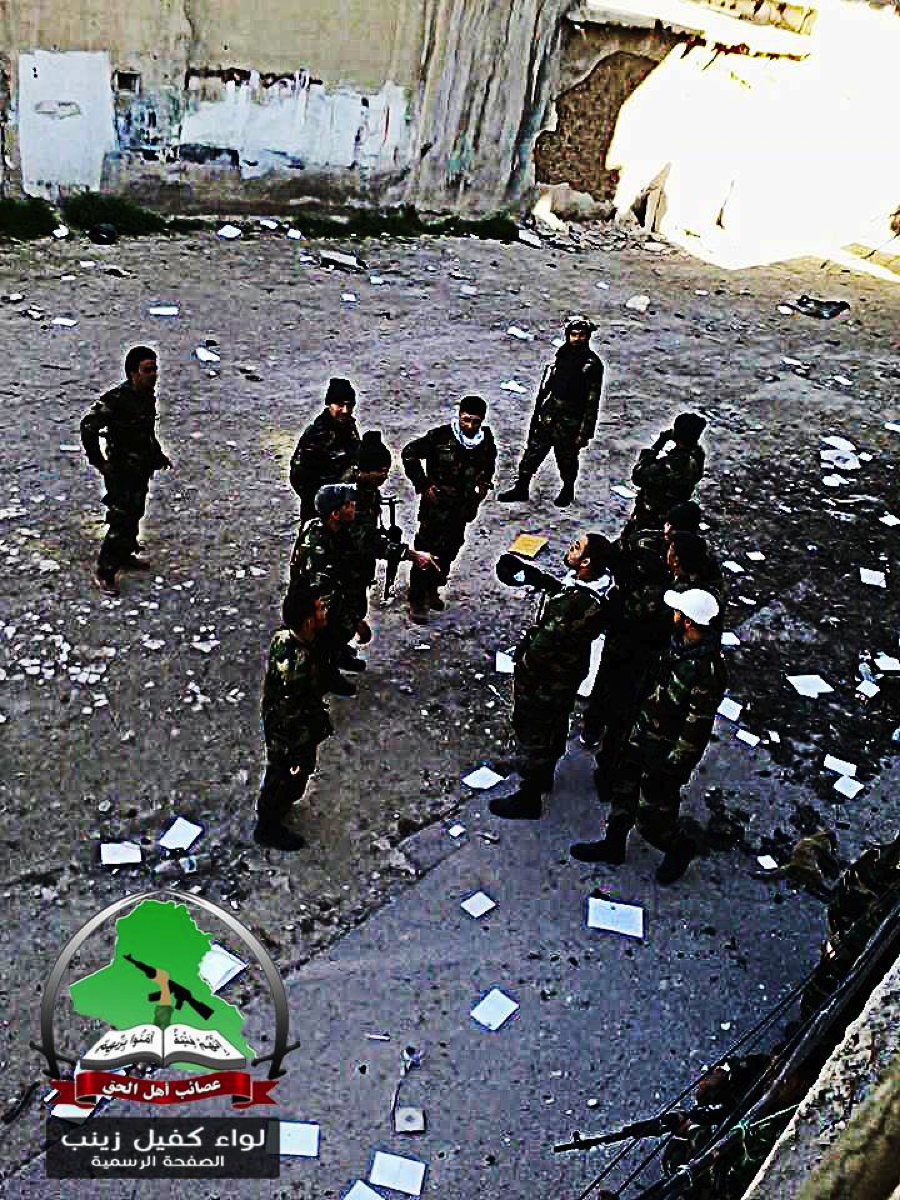 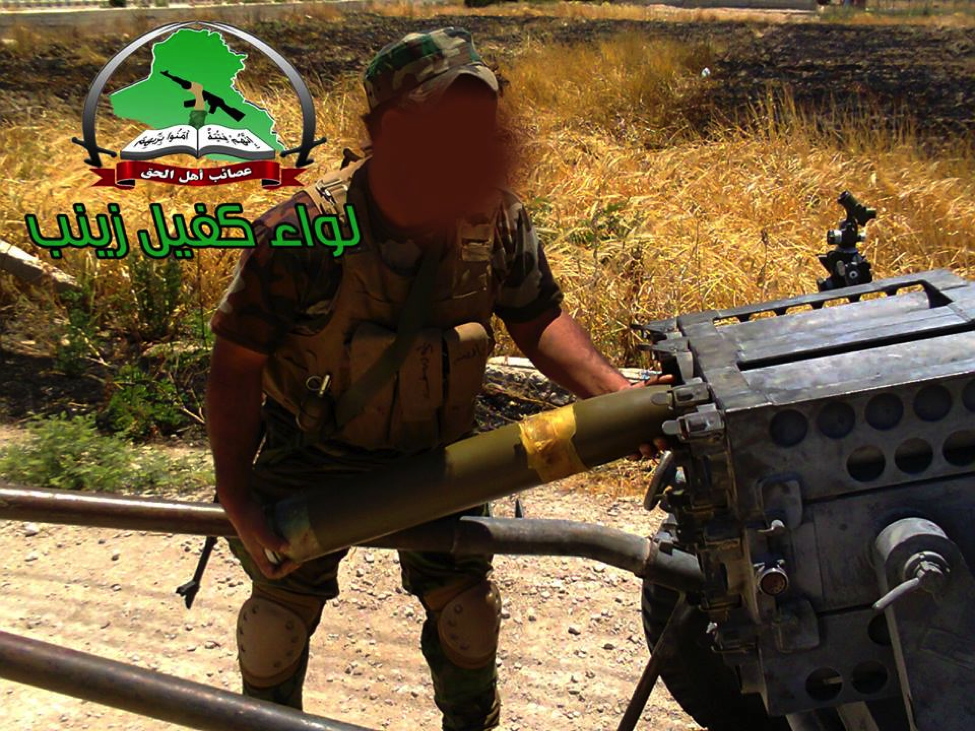 Figure 8: An AAH-LKZ member loads what appears to be a Chinese-made Type 63 107 mm rocket launcher. 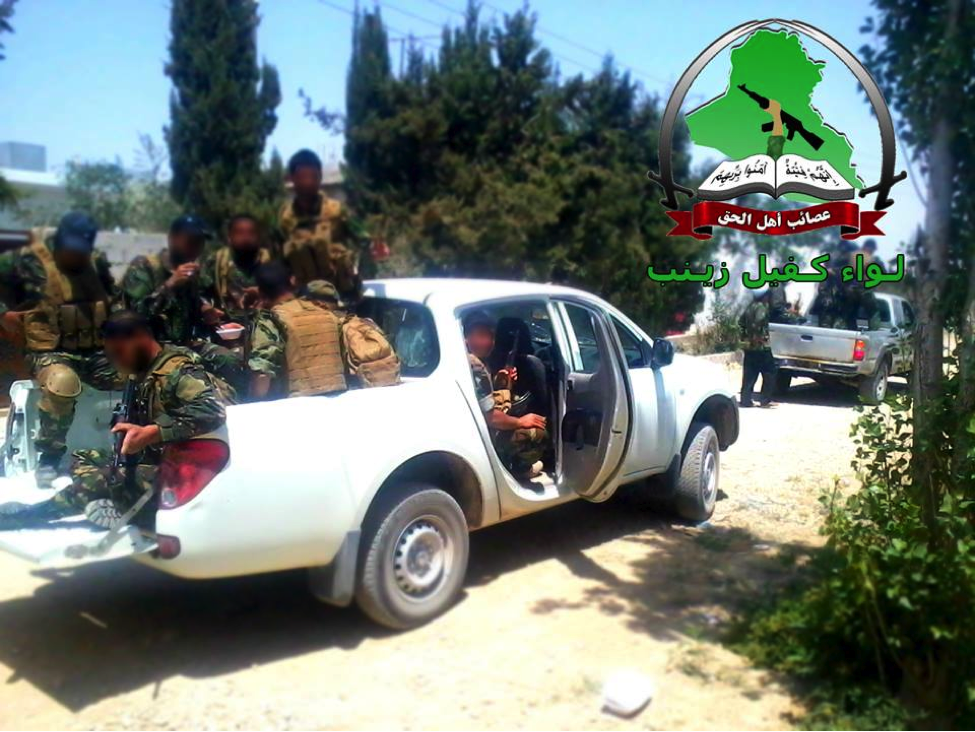 Figure 9: In AAH-LKZ photographic and video propaganda, pickup trucks feature prominently as a tool used to transport their fighters.


In the video clip, AAH-LKZ members are shown playing a popular militant Iraqi Shia song, “Support Those Who Defend Zaynab” by Ali al-Delfi and Ahmed al-Sa’adi. In fact, most AAH-LKZ video clips are set to songs which can be found on this Hizballah Cavalcade post dealing with militant Shia Iraqi music made for/to praise Shia fighters in Syria. 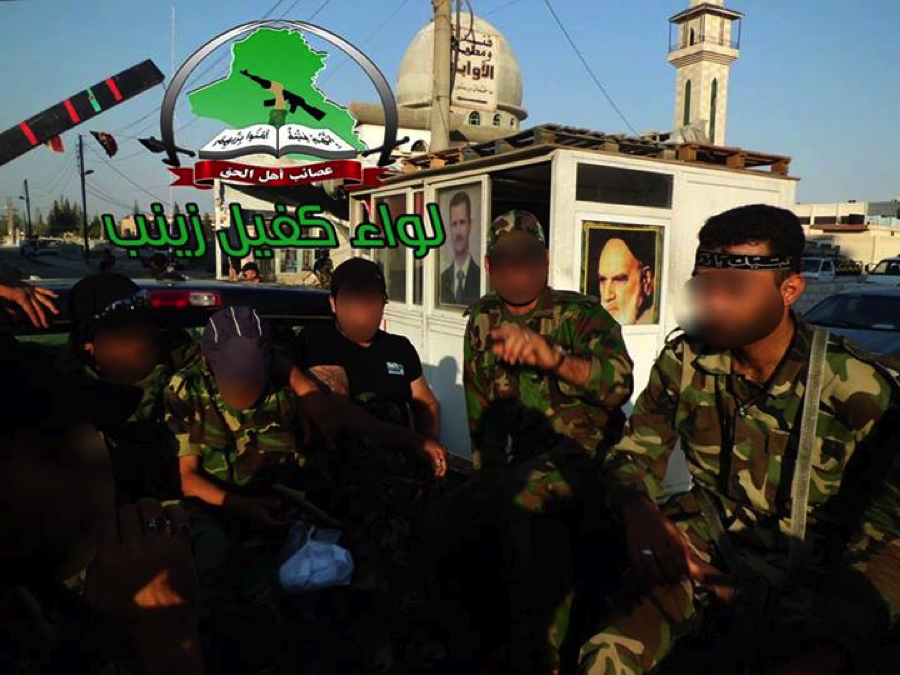 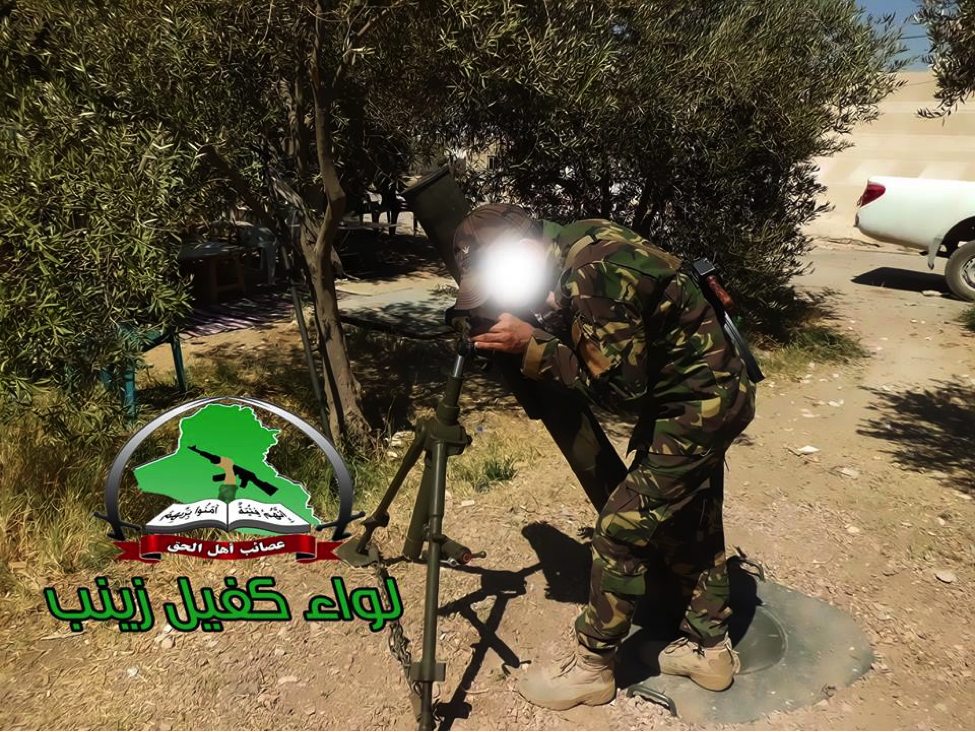 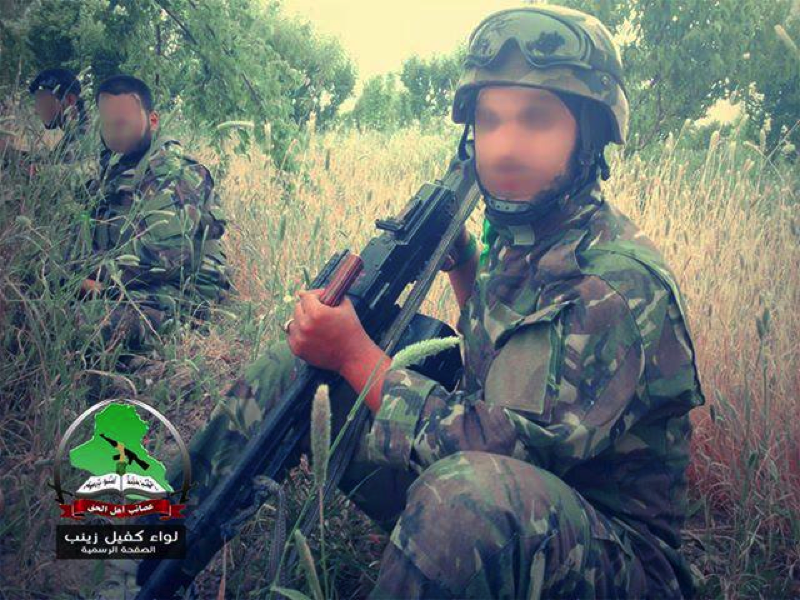 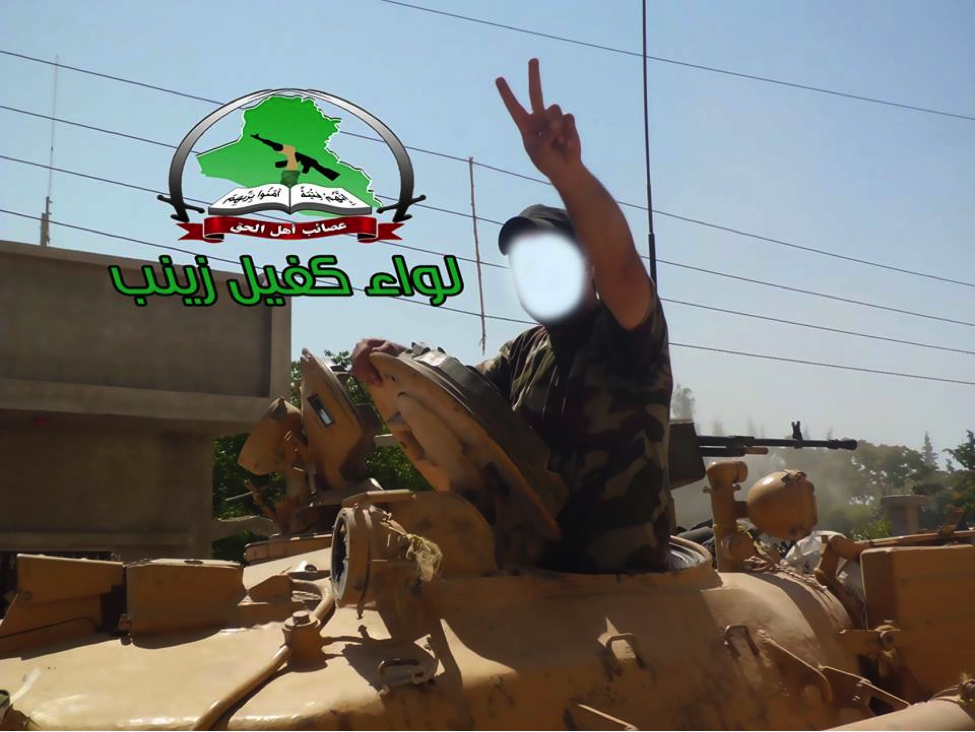 Figure 13: An AAH-LKZ militiaman poses inside a tank turret. 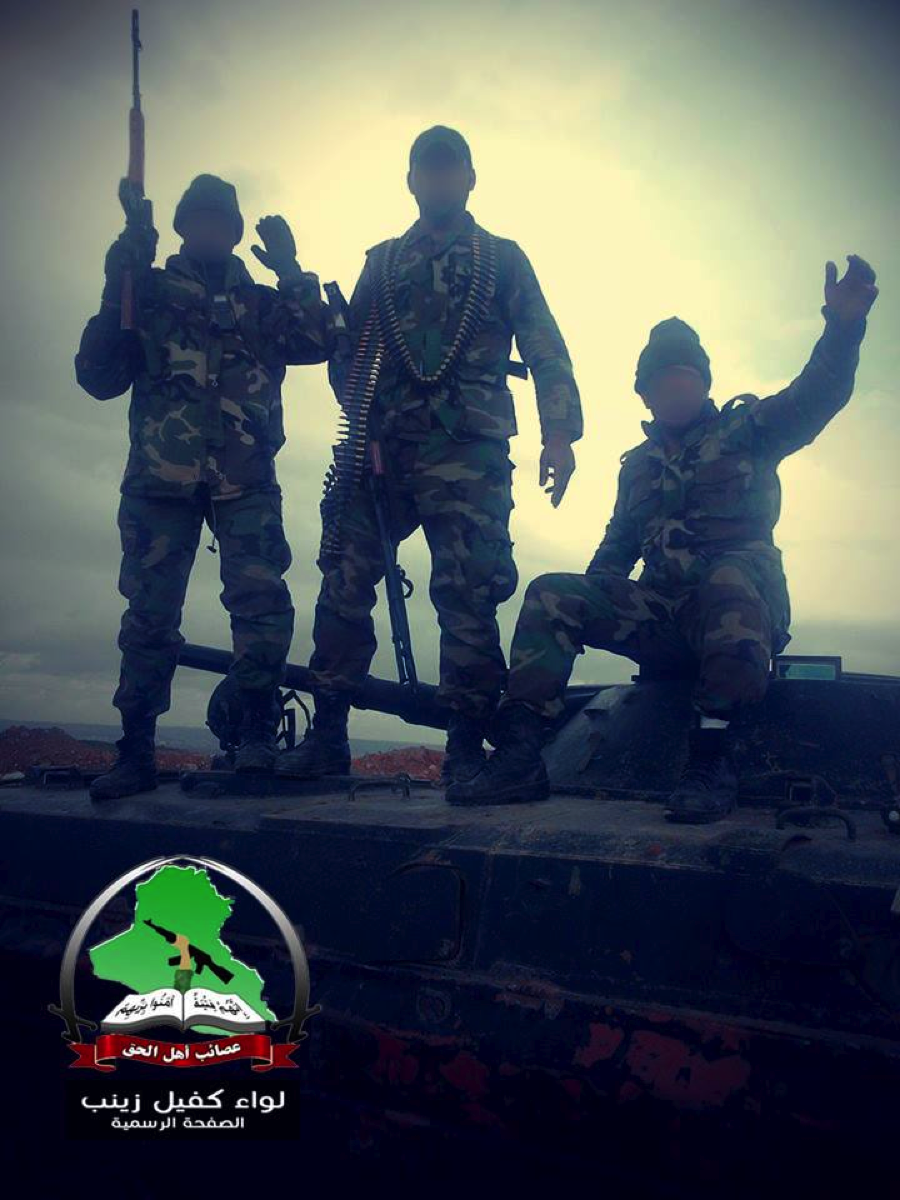 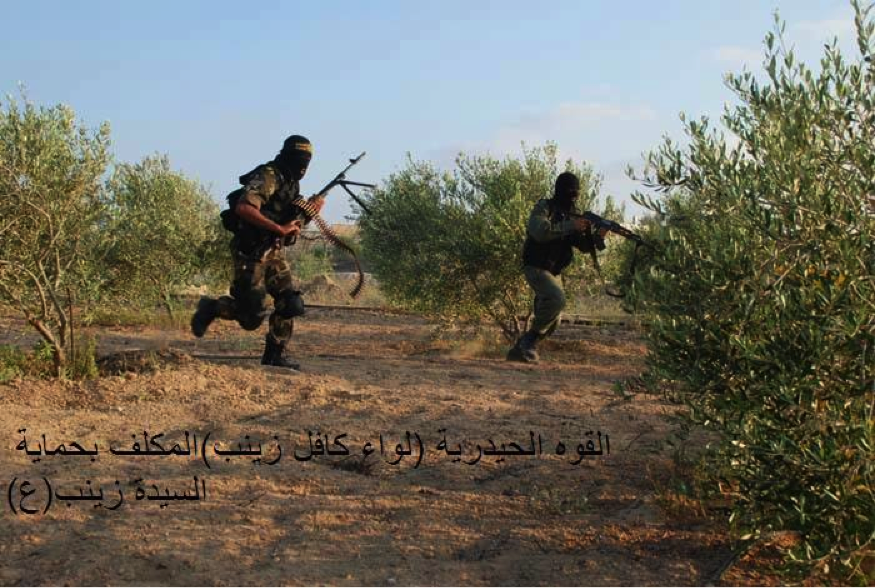 Figure 15: A photo from a pro-AAH Facebook claiming to show members of “Liwa’a Kafeel Zaynab”. 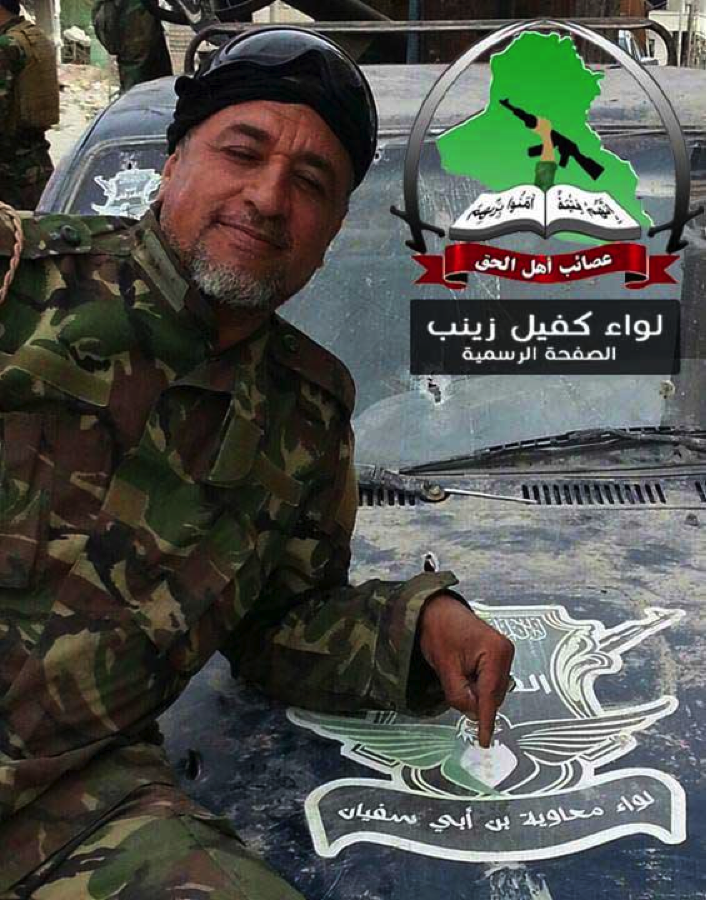 Figure 16: An AAH-LKZ member poses with a destroyed technical belonging to a faction of the Free Syrian Army. The AAH-LKZ member shown was reported killed in Syrian fighting by AAH. 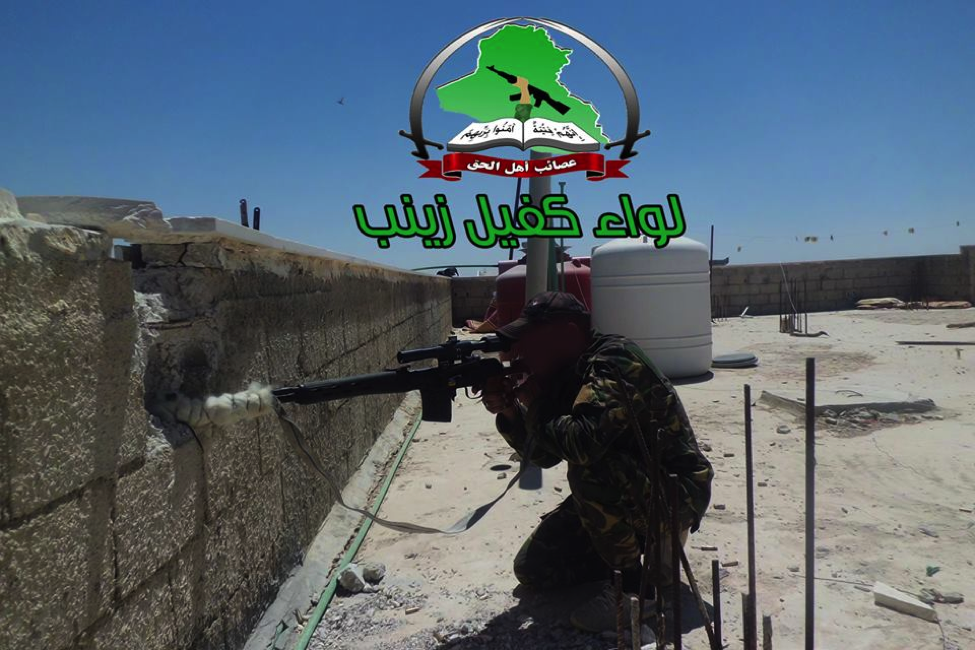 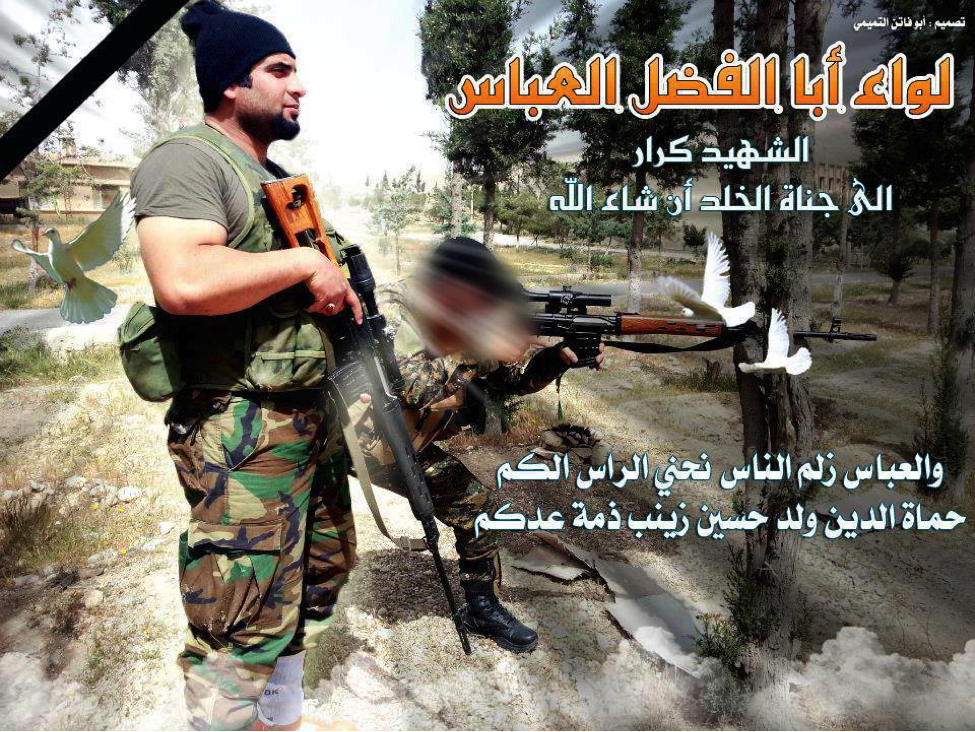 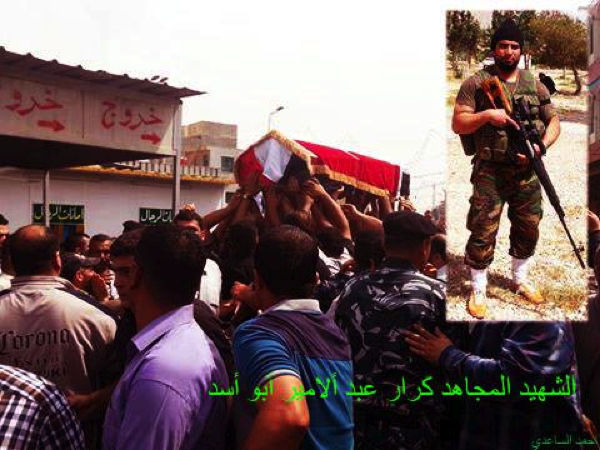 Figure 19: A photo of Karar’s funeral and a shot of him during deployment to Syria. The photo was posted on AAH-LKZ’s official Facebook page. 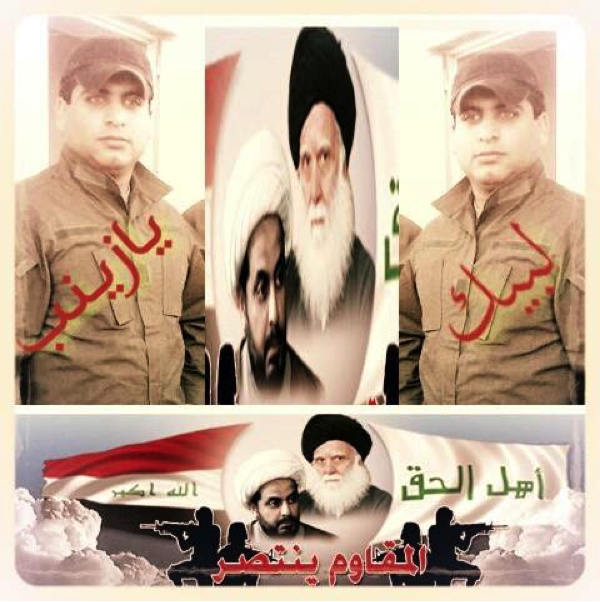 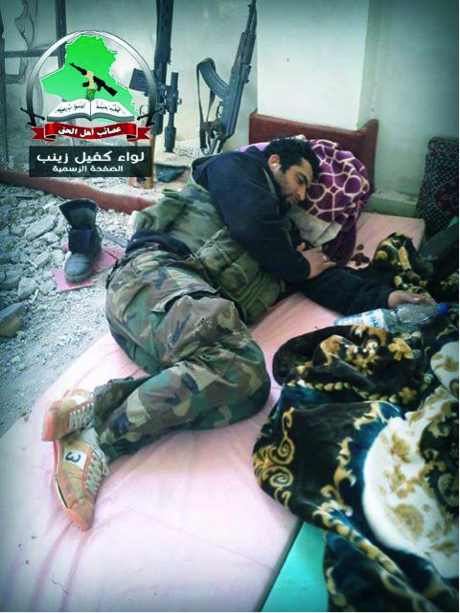 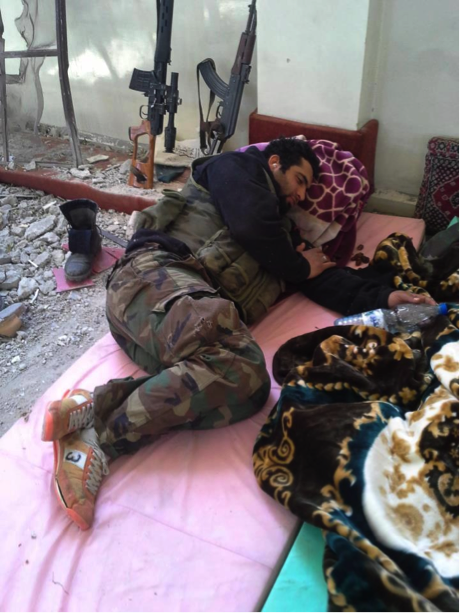 Figure 21: The original LAFA photo for Karar napping (right) with the copy re-released by AAH-LKZ (left).
Karar Abed al-Amir Fatlawi Abu Assad (A.K.A. Karar Fatlawi and Karar Abed al-Amir Aziz Abu Assad)—often simply referred to as just Karar—has been a main face highlighted by AAH-LKZ as an example of a brave martyr. Earlier in 2013 (April-May), he was featured prominently in many Liwa’a Abu Fadl al-Abbas photo-releases on their official and unofficial social media pages. Additionally, AAH did not disguise his membership with the group when martyrdom posters were produced for and after his funeral. In fact, Karar was featured in one of the first Hizballah Cavalcade posts. In the post it was noted that, “Karar has one of the best developed narratives of any of the Iraqis killed. His story comes complete with numerous photos, a Facebook page, and supposed videos of him engaged in fighting.” AAH-LKZ has simply repackaged available imagery of Karar and is currently using his image as a way to promote the group’s struggle in Syria.
Karar is not alone with being featured in AAH martyr propaganda. Salem al-Ghanami, another AAH-LKZ fighter who was killed in Syria, has become another symbol of AAH-LKZ martyrdom in Syria. On July 25th, AAH-LKZ established an official Facebook martyrdom page for al-Ghanami with unique images of the fighter. Some of these photos showed him in civilian dress, riding horses, and generally pushed the theme that he was like most average young men. 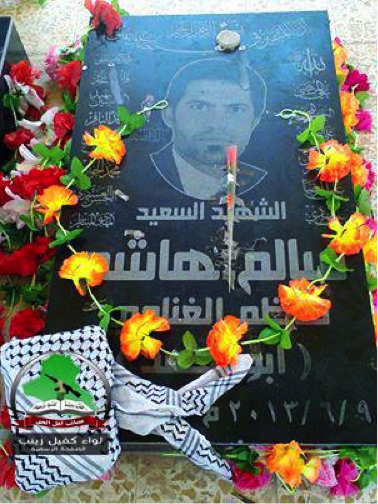 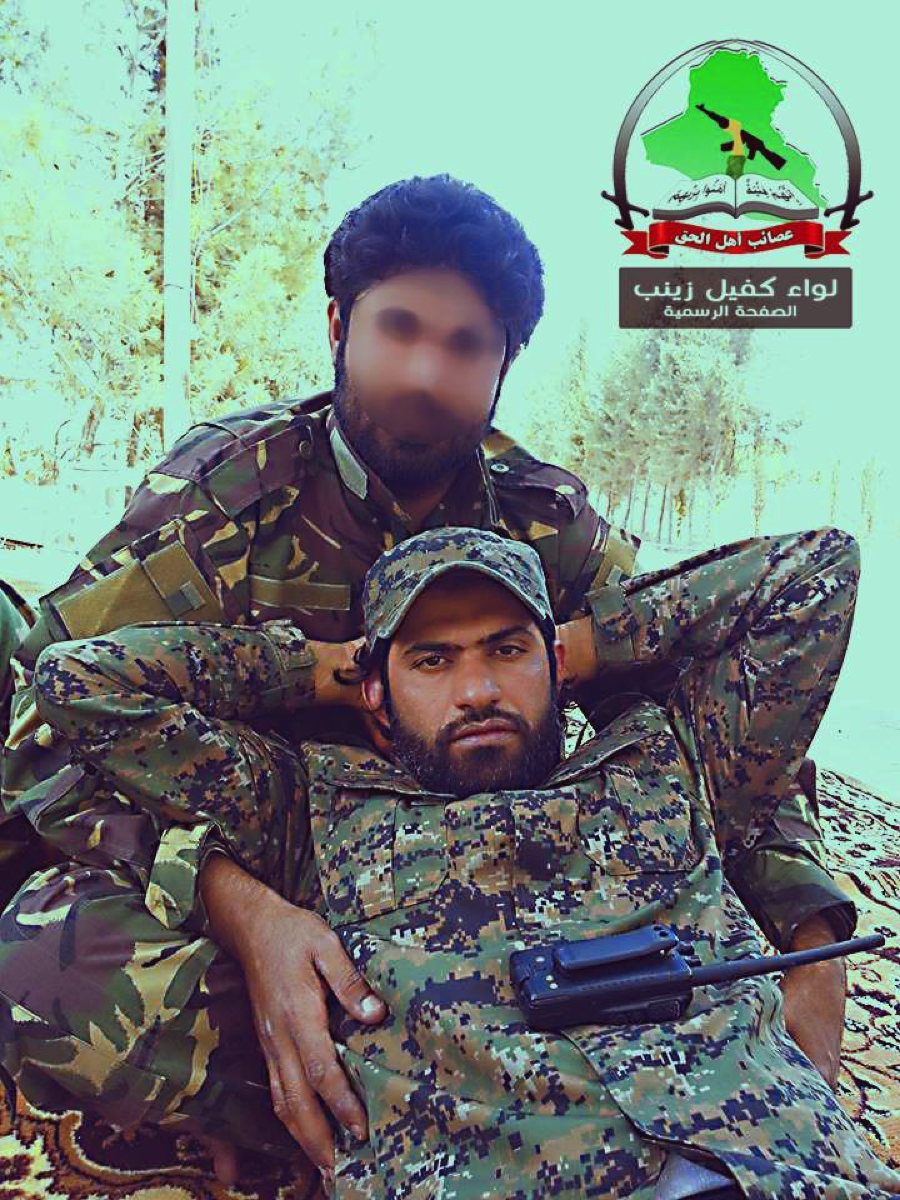 Figure 23: Ghanami is shown with another AAH-LKZ fighter. He is dressed in modern digitized camouflage. 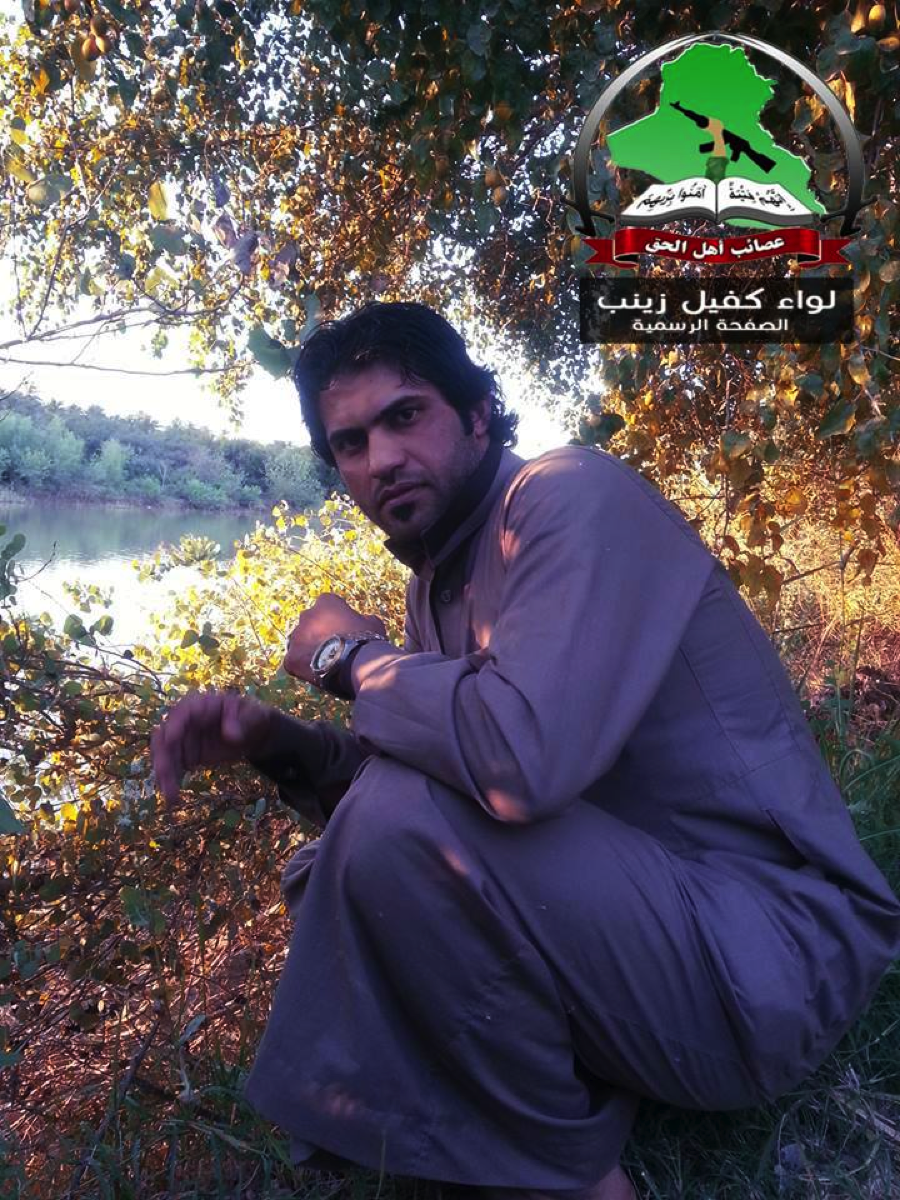 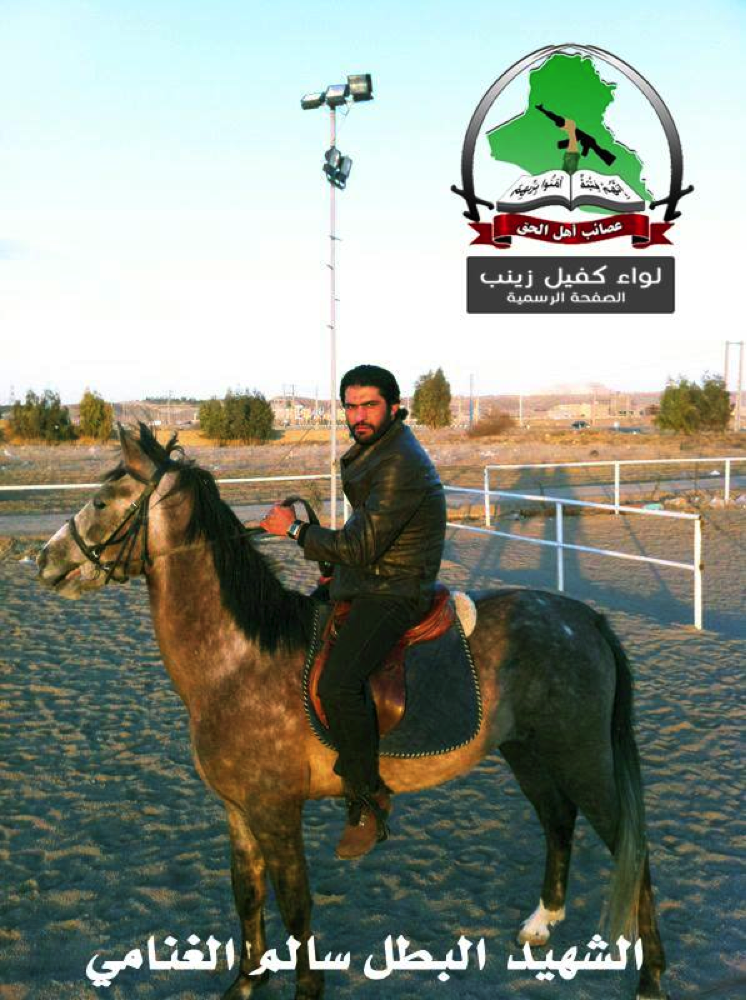 Figure 25: Ghanami is pictured riding a horse in an officially released photo.

Figure 26: The banner photo for Ghanami’s official Facebook page. The Saydah Zaynab Shrine is pictured on the left.
AAH, Hizballah, & The Syrian Army
Since the establishment of LAFA, the group’s constituent elements have included fighters from Lebanese Hizballah and Asa’ib Ahl al-Haq. Based on this data, it was clear the two groups were cooperating with one another under a united front inside Syria. Following the announcement of AAH-LKZ, the organization has released videos which the group claims show their members and Lebanese Hizballah fighting side by side. Since Lebanese Hizballah played an integral role in creating AAH-LKZ’s parent organization, it should come as little surprise that there is continued cooperation in Syria.
Since the first announcement of LAFA being involved in the fighting in Syria, their own propaganda had shown their fighters were working in close concert with Bashar al-Assad’s Syrian Arab Army (SAA). This has also become a regular theme with AAH-LKZ. At times it has included videos and photographs of the group offering infantry support to armored vehicles.
One video claims to have been filmed following the “Liberation of Damascus Airport”, which may reference a small counteroffensive launched by Assad’s forces in the late winter of 2012-early 2013. The video also claims that Lebanese Hizballah members and AAH-LKZ were present. The clip also shows Karar Abed al-Amir Fatlawi Abu Assad as being present. In another video, AAH members are shown offering infantry support to SAA armored units.

[youtube=https://www.youtube.com/watch?v=sD2Tm1u2hfI&feature=youtu.be]
This film purports to show Asa’ib Ahl al-Haq fighters with Syrian army armored support. The video also was reported to have taken place in the vicinity of the neighborhood around the Saydah Zaynab Shrine.
Tabatabai Visits the Troops 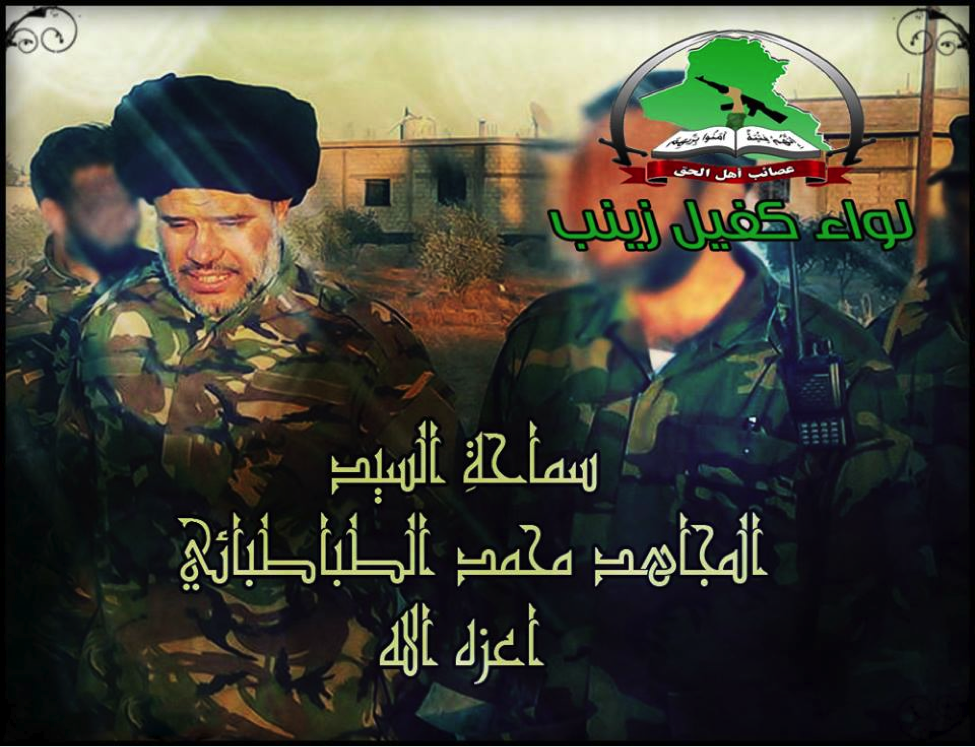 Figure 27: Tabatabai is shown in this AAH-LKZ propaganda photo visiting the group’s men in Syria. 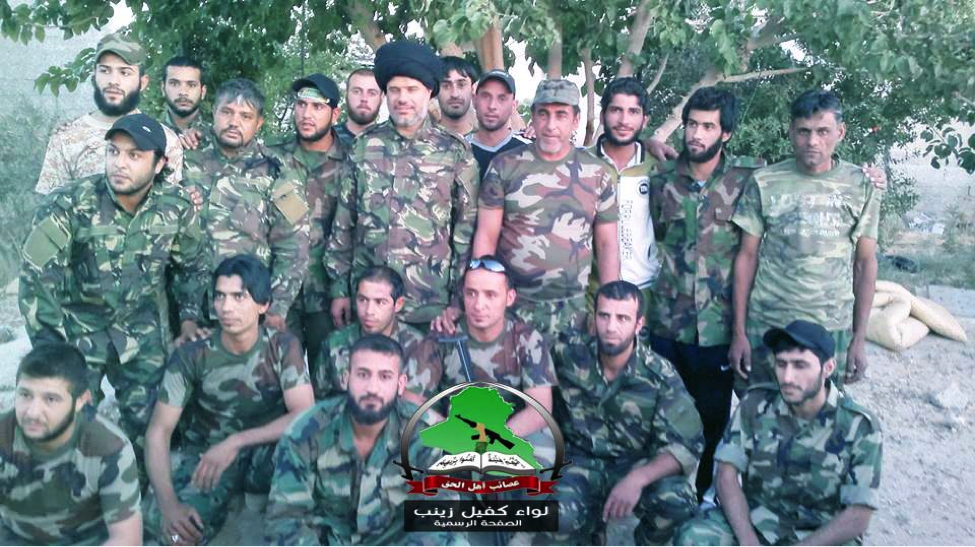 Figure 28: Tabatabai (in the black turban) is pictured with AAH-LKZ members in Syria. 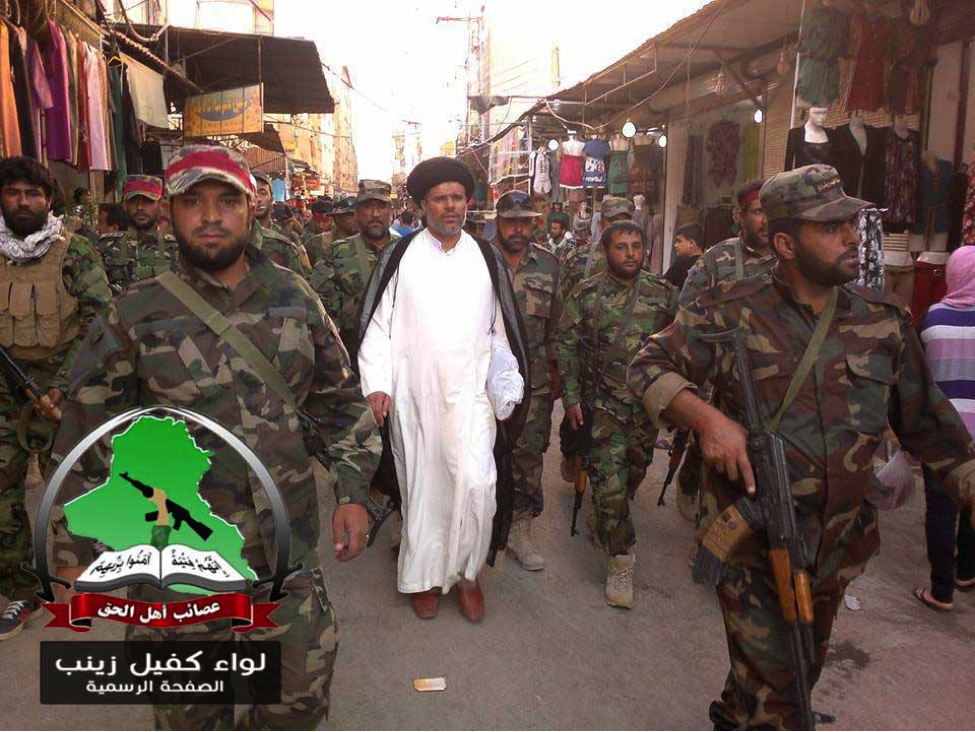 Figure 29: Tabatabai is shown with AAH-LKZ fighters and bodyguards touring the neighborhood around the Saydah Zaynab Shrine.
Muhammad al-Tabatabai, a former Sadrist leader, and a founder AHH, was recorded visiting AAH-LKZ fighters in Syria.[6] Tabatabai has also been described as “part of AAH’s core leadership”. [7] His visit helps demonstrate the importance of AHH forces in Syria. Films of his meetings with AAH militiamen in Syria were released in mid-July (July 18th). During his visit to Syria, Tabatabai was also shown with wounded AAH members and greeting other AAH personnel.