NOTE: For prior parts in the Hizballah Cavalcade series you can view an archive of it all here.
—
The Songs of Liwa’a Abu Fadl al-Abbas: Militant Iraqi Shia Music & Syria
By Phillip Smyth ([email protected])
Click here for a PDF version of this post

Remember the war against Franco?

That’s the kind where each of us belongs.

Though he may have won all the battles,

We had all the good songs.

*Note: The author has counted at least thirty different songs available online which have been produced to praise LAFA. Most of these songs were not included due to their lack of popularity in LAFA social media circles.
When journalist Nicholas Blanford first announced Iraqi Shia were fighting alongside the forces of Syrian president Bashar al-Assad, his main source for this assessment was a music video.[1] From a period extending from fall 2012-summer 2013, Shia Islamist organizations operating in Syria have released more music videos and have been actively using them in a complex messaging strategy.
The utilization of musical propaganda has been a key propaganda strategy used by radical Shia Islamist organizations.[2] Lebanese Hizballah has employed a number of bands to sing songs promoting the group’s narrative since the 1980s. In 2008, the Iraqi government found the songs made for Muqtada al-Sadr so threatening, they banned them.[3]
Due to Shia Islamist involvement in the Syrian Civil War, Iraqi Shia who favor Muqtada al-Sadr and pro-Iranian Shia parties, have produced a wide variety of songs praising Liwa’a Abu Fadl al-Abbas (LAFA). These songs are often overtly sectarian and offer blatant threats against the Syrian rebels.
The Iraqi-produced music videos, created to honor Iranian-backed Shia fighters attached to LAFA, also occupy a strange ideological gray-area. The singers often praise and or have praised Muqtada al-Sadr and the Liwa’a al-Yum al-Mawud (the Promised Day Brigade). However, Sadr has not publicly supported Shia militiamen fighting in Syria.[4] Some of the same musicians who sing for LAFA, have also backed organizations which have fought Sadr, namely Asa’ib Ahl al-Haq (AAH).[5]
Other Iraqi influences are quite extensive in newly made music about LAFA, including the musical rhythm styles. Demonstrating that these songs are aimed at an Iraqi audience, they are often sung in the Iraqi dialect of Arabic. All of the singers and songwriters who have made these songs have also had extensive background experience singing for Shia Islamist organizations, performing religious songs, and have gained the majority of their fans from their online presence. 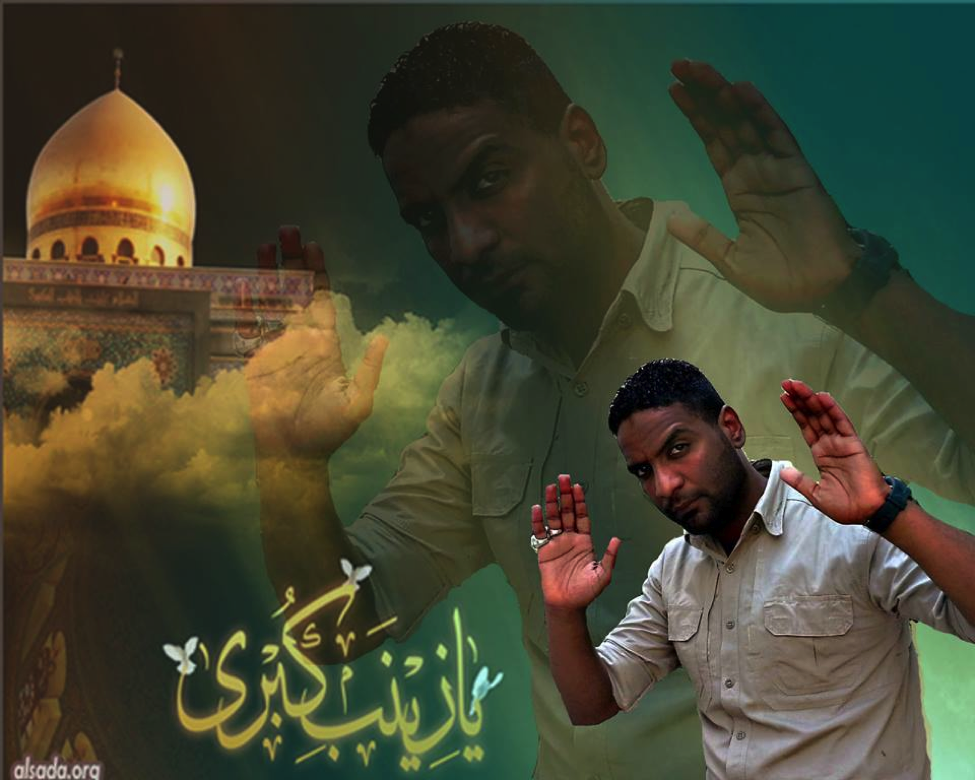 Figure 1: ‘Ali al-Muwali poses for a picture which includes the Saydah Zaynab shrine. 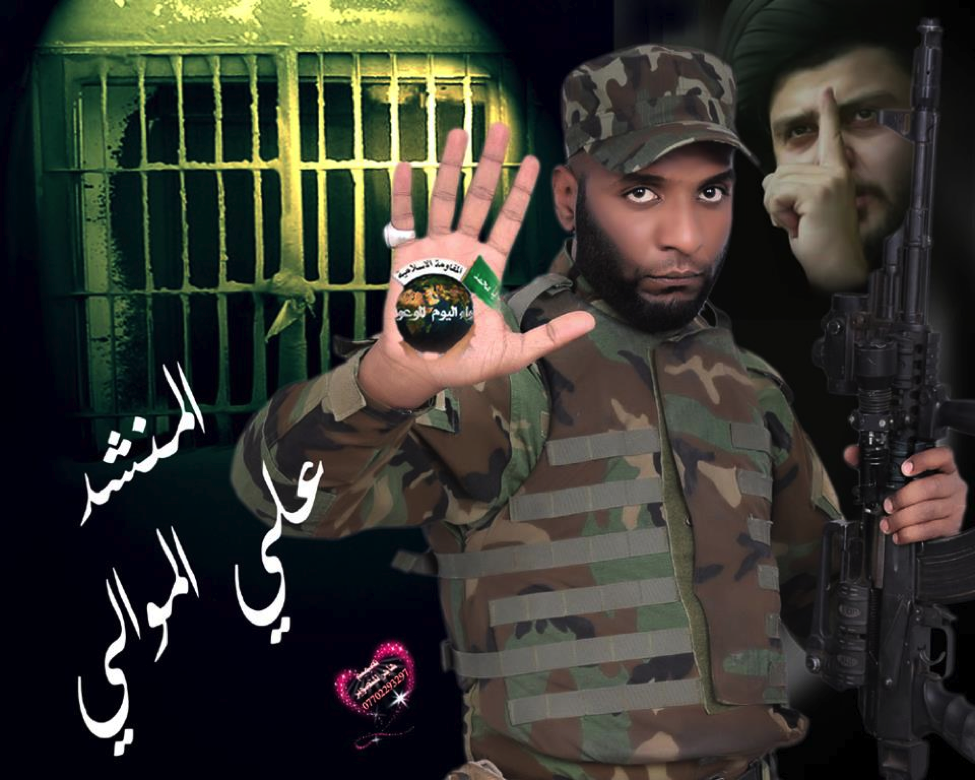 Figure 2: Muwali has not hidden his links to Liwa’a al-Yum al-Mawud. In his left hand, the group’s logo is visible. 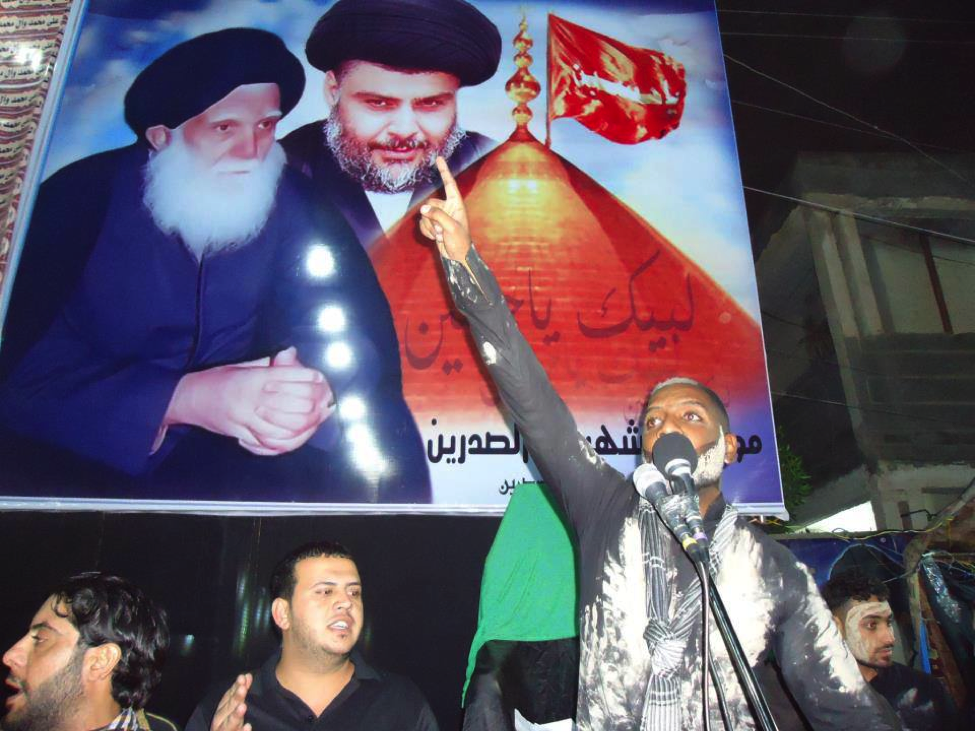 Figure 3: Muwali singing to Sadr supporters.
Released on September 5, 2012, the music video which first burst onto the scene carrying the message of Liwa’a Abu Fadl al-Abbas was “Ya Zaynab” by ‘Ali al-Muwali. While the initial music video did not receive as much attention in pro-LAFA social media circles, a more popular edit of the song with a new music video quickly became well-known. Appearing on YouTube at the end of December, the new video and song soon became the anthem for LAFA.  It is clear from the song’s lyrics, music video, and time of release that its creation was timed to coincide with further announcements about the group’s existence.
While the initial music video was less popular than the re-edited LAFA video, the song clearly promoted a militant message. Prior to singing about LAFA, singer of “Ya Zaynab”, ‘Ali al-Muwali had made a number of songs dedicated to praising attacks against U.S. and Coalition troops in Iraq. These songs appeared to be created for Liwa’a al-Yum al-Mawud. Muwali’s personal Facebook page includes two “Likes” for Liwa’a al-Yum al-Mawud Facebook pages.

Another early song and music video utilized by Liwa’a Abu Fadl al-Abbas first appeared online in early February 2013. The song emerged on YouTube and in forums under a variety of titles. However, the primary title it was given was, “Liwa’a Abu Fadl in Syria Third Release”. It’s probable the singers and songwriters came from the same groups found in other videos on this post.
As with LAFA’s edited music video for “Ya Zaynab”, this song’s video showed footage of LAFA fighters engaged in combat and samples from a film about the Battle of Karbala. The song also featured threats against the Free Syrian Army and overt messages appealing to Shia-identity. “Liwa’a Abu Fadl in Syria Third Release” was later used as background music in a video showing members of Kata’ib Sayyid al-Shuhada inspecting dead Syrian rebels (see the first video on the post). 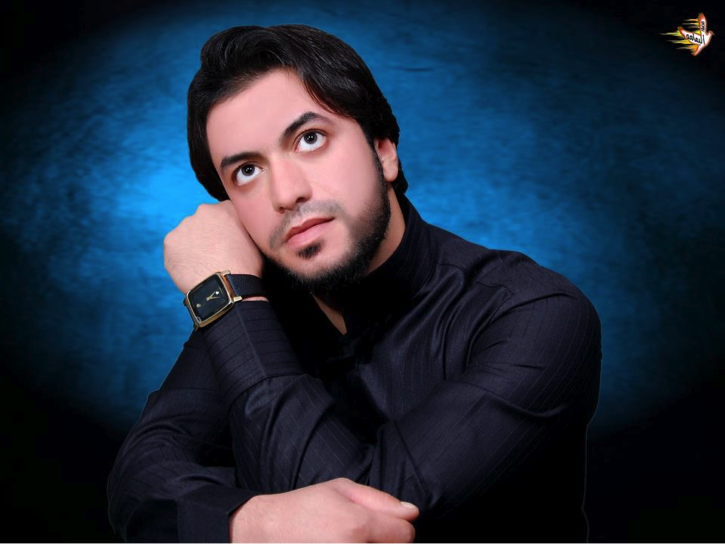 Between April-May, 2013 a number of songs were released by Iraqis praising the Abu Fadl al-Abbas Brigades. “Dedicated to the Abu Fadl al-Abbas Shia Brigade”, was released in mid-May by Pro-Muqtada al-Sadr singer Muhammed Abu ‘Azrael al-Karbalai on Iraqi Shia forums.[6] It warned the rebel Free Syrian Army, telling them “Do not cross the line…We will silence you” and also praised the Syrian army, “O Syrian army, focus and show them what you can do” The song also expressed fears of what would happen if the forces of Bashar al-Assad did not win, saying, “Oh, [Syrian] army, God knows what will happen if you fail!” 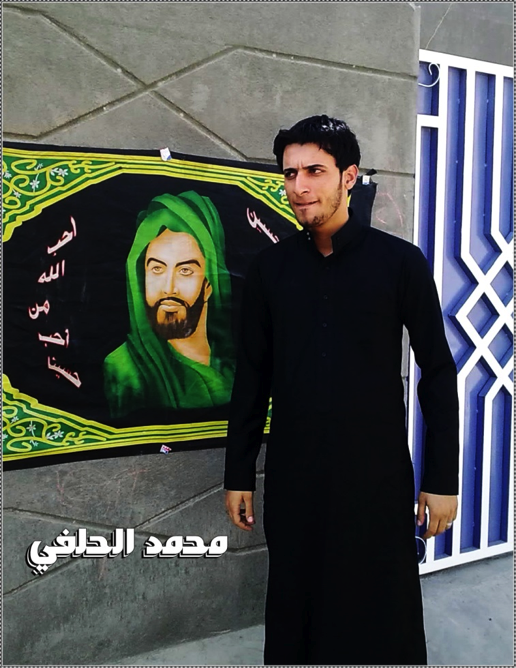 Figure 5: Muhammed Helfi stands in front of a picture of Husayn, one of the most important figures in Shia Islam.
Another LAFA song, performed by Muhammed al-Helfi was called, “Zealous to Defend Saydah Zaynab”. Helfi, an Iraqi Shia and pro-Sadr singer (he has also performed with pro-Sadrist singer Laith al-Ruba’ie) adopted Shia identity messaging and delved into conspiracy narratives to explain the war in Syria. In the song, al-Helfi rehashes claims of a “Saudi and Jewish” conspiracy against the Shia. The narrative presented matches those produced by LAFA and other Iranian-backed organizations. “We are all for Zaynab”, Helfi sings, “we know the difference between precious and cheap…We get rid of the cheap…We Shia know our worth.” 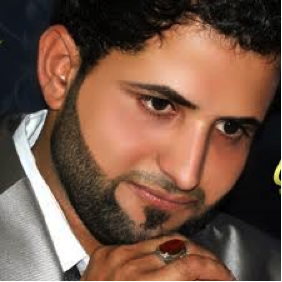 Figure 6: Abbas al-Khazali.
Another Iraqi-produced song was dedicated specifically to Liwa’a Abu Fadl al-Abbas on April 6. The song threatens Syrian rebels and praises Liwa’a Abu Fadl al-Abbas. In fact, LAFA’s Sung by Abbas al-Khazali, the music video shows Shia fighters dressed in similar combat gear as LAFA and armed with M16A2 rifles. There is also a shot of these Shia fighter-cum-singers capturing and abusing what can be presumably Sunni Islamist or Free Syrian Army fighters. The theme of capturing and abusing “Enemies of Shi’ism” has been a prevalent theme in songs released by Iraqi singers since April.

On April 19th, a pro-LAFA song was posted to YouTube. Much of the footage used showed LAFA operations, but when the music video begins, the main messaging thrust is one of Shia power over Sunni enemies. Men (assumedly Shia fighters) storm a building and forcibly detain these enemies. Later in the song, the singer calls Saudi Salafist Sheikh Adnan Al Aroor, “Black” (i.e. holding a black ideology). 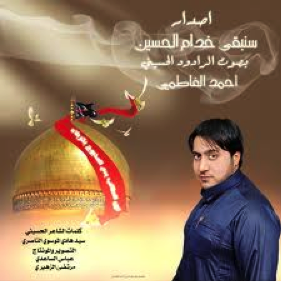 Ahmed Fatimi, another Iraqi singer, also sang a song in praise of the “Defenders of Zaynab”. The music video utilizes photographs of LAFA members and commanders first put online between the fall of 2012-spring 2013. 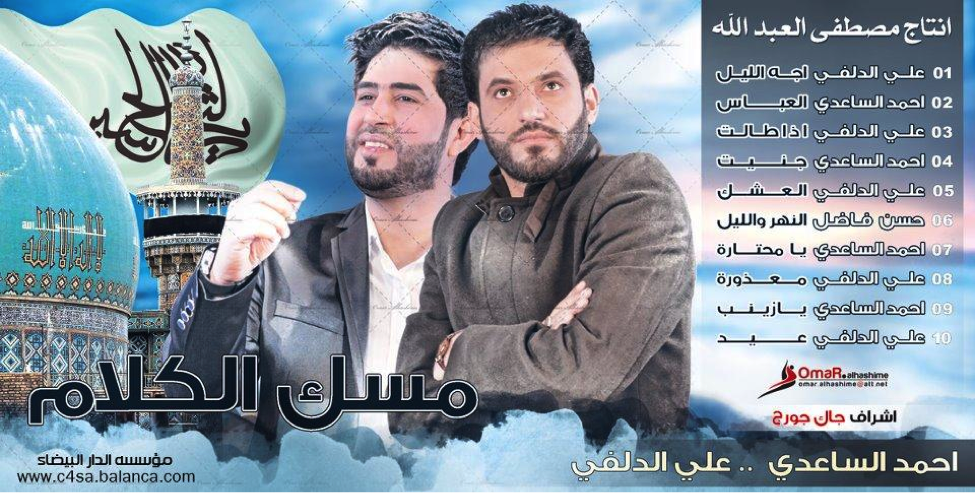 Figure 8: Ali al-Delfi and Ahmed al-Sa’adi pose on the cover of one of their 2012 CDs.
One of the first LAFA songs to be released in 2013 (March 5) was made by Ali al-Delfi and Ahmed al-Sa’adi. The song immediately became popular on forums and Facebook pages devoted to LAFA and other Iranian-backed Shia groups in Iraq. Demonstrating the song’s reach, in of the few pieces of video footage taken of LAFA fighters in Syria, the song was played on one of the fighter’s phones while LAFA was setting-up a sniper position.

On May 5, 2013, Ali al-Delfi and Ahmed al-Sa’adi released a song entitled, “Operetta for the Righteous”. The song was dedicated to the Iranian-backed Iraqi group, Asa’ib Ahl al-Haq (AAH).  Pointing to closer links between some Iraqi singers and the organizations they sing about  the fact that new and unique footage was utilized for the music video. The music video featured short pieces of new footage showing Asa’ib Ahl al-Haq members engaged in combat in Syria and readying rockets.

By mid-June, another Delfi and Sa’adi song appeared showing new footage of LAFA combat activities. The song was dedicated to the “Martyrs of Liwa’a Abu Fadl al-Abbas”. 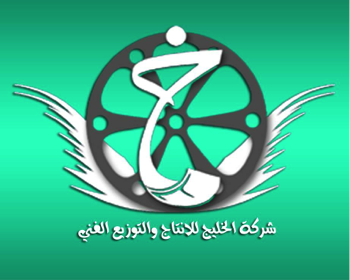 Figure 9: Khaleej Al-Thaqafiya’s logo. The logo can be seen on many pro-LAFA music videos produced by the company.
It is important to note that many of these pro-LAFA songs were produced by the Khaleej Al-Thaqafiya media company. Khaleej Al-Thaqafiya appears to promote Iranian ideologue and late Supreme Leader Grand Ayatollah Khomeini, Lebanese Hizballah leader Sayid Hassan Nasrallah, pro-Iran cleric Ayatollah Muhammed Baqir al-Hakim (assassinated in 2003) and Grand Ayatollah Muhammed Baqir al-Sadr on their Facebook page. Also, on its Facebook, Khaleej Al-Thaqafiya posted a notice to “Remember Imad [Mughniyeh]”, Hizballah’s master terrorist killed in a 2008 explosion in Damascus.[7]. However, on its regular webpage and YouTube channel, songs praising Liwa’a Abu Fadl al-Abbas, and political content appear to be absent.
Since LAFA has built a portion of its group identity off of musical agitprop, there is the likelihood this material will be fully incorporated into an overarching narrative for the group.  Due to the propaganda effect of easily distributed musical performances online, it stands to reason that more musical propaganda praising the actions of LAFA and other Iraqi Shia operating in Syria will continue to appear online.
[1] See: https://www.csmonitor.com/World/Middle-East/2013/0118/Video-appears-to-show-Hezbollah-and-Iraqi-Shiites-fighting-in-Syria.
[2] Hizballah actually employs a number of solo singers, bands, and other musical acts. Most prominent among them is Firqat al-Wilaya, which has been described as the group’s “Official band”.
[3] See: https://www.npr.org/templates/story/story.php?storyId=90465454.
[4] See: https://www.haaretz.com/news/features/nasrallah-fights-uphill-battle-for-assad.premium-1.527212.
[5] See: https://www.longwarjournal.org/threat-matrix/archives/2011/01/sadrs_return_short-lived_after.php. On more recent fighting between Sadr’s forces and Asa’ib Ahl al-Haq, see: https://iswiraq.blogspot.com/2013/06/2013-iraq-update-23-sadrists-and-asaib.html.
[6] See: https://forums.iqr0.com/showthread.php?t=295806, https://www.al3raqihouse.com/vb/showthread.php?t=30721. See also: https://www.anwariraq.com/vb/showthread.php?t=27041.
[7] “U.S. Official: World ‘Better Place’ With Death of Hezbollah Figure”, Associated Press, February 13, 2008, https://www.foxnews.com/story/0,2933,330525,00.html.