NOTE: For prior parts in the Hizballah Cavalcade series you can view an archive of it all here.
—
Kata’ib Sayyid al-Shuhada: Another Supplier of Iraqi Shia Fighters in Syria
By Phillip Smyth
Click here for a PDF version of this post 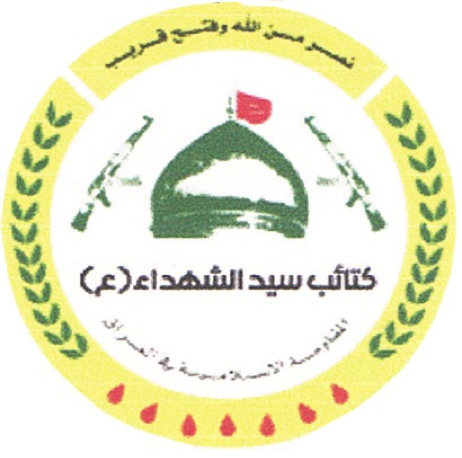 Figure 1: Kata’ib Sayyid al-Shuhada’s symbol.
Following funerals for some of its members killed fighting in Syria, The Kata’ib Sayyid al-Shuhada (The Battalion of the Sayyid’s Martyrs or KSS) has quietly established itself as an Iraqi Shia militia force contributing combatants to the battlefront in southern Damascus. At present, the KSS’s main raison d’être appears to be as a source for Iraqi Shia fighters who can be used to “Defend the Zaynab Shrine”, a major Shia Islamic site in Syria.
The first reports of KSS’s existence occurred on April 14, 2013. In one press report, it was stated that KSS initially went by the names of Kata’ib Karbala (the Karbala Battalions) and later as Kata’ib Abu Fadl al-Abbas.[1] Interestingly, a group which had targeted American and Coalition forces in Iraq was and Iranian-backed “Special group” called Kata’ib Abu Fadl al-Abbas.[2] Adding further significance to the KSS’s earlier names and its links to Syria; KSS sends its fighters to Syria where they act as an intrinsic part of the Syrian-based Liwa’a Abu Fadl al-Abbas (LAFA).
It was reported that the KSS was formed due to splits within the Iranian-created and backed Kata’ib Hizballah.[3] These contentions were initially based on nameless sources and were reported by a small number of Iraqi Arabic-language publications.  It was also claimed that Abu Mustafa Sheibani (Hamid al-Sheibani), a pro-Iranian militia leader, who had been involved with the creation of many so-called “Special Groups” (including Asa’ib Ahl al-Haq and Kata’ib Hizballah) was KSS’s leader.[4] According to a Washington Institute for Near East Policy report, Sheibani “holds both Iranian and Iraqi citizenship” and when operating in Iraq, concentrated on the, “distribution of explosively formed penetrator (EFP) roadside bombs”.[5]
Based on the KSS’s few public appearances and its activity in Syria, it is likely the organization has a steady source of funding. Said funding allows the group to hold attention grabbing funerals and to put on airs of professionalism and organization. Nevertheless, based on Iraqi media, forums, and other social media sources, the size of the group’s membership, leadership, recruitment activities, and amounts of money it may receive remain unknown or unconfirmed.
Mirroring the activities of other Lebanese and Iraqi pro-Iranian groups, such as Kata’ib Hizballah, Asa’ib Ahl al-Haq, and Hizballah, the KSS sent a number of fighters to serve in the ranks of the Damascus-based Liwa’a Abu Fadl al-Abbas. When these fighters were killed, LAFA was often the initial or only group which would claim them as members. Only when Iraqi family members of dead fighters were interviewed, was it revealed their deceased relatives were also members of KSS.[6]
Pointing to direct Iranian support for KSS, the bodies of fighters who belonged to the organization have, on all occasions involving a funeral, been returned to Iraq via Iran. On May 6, 2013, the funeral for Diya Issawi included claims he belonged to KSS and that his body was returned to Iraq from Iran, through Basra.[7] Later that month, on May 17, 2013, two more funerals were held for Iraqis killed in Syria. The first, for Hassan Ali Farhud, was held in Sadr City, a Shia section of Baghdad.[8] The second funeral, for Muhammed Aboud al-Maliki, was held in Basra. Paralleling the return of Issawi’s body, Farhud and Maliki’s bodies were delivered through Iran. (Note: Partial profiles for Farhud, Issawi, and Maliki, were provided on Hizballah Cavalcade’s “Roundup of Iraqis Killed in Syria, Part 2”).
During funerals for its members, the KSS has fielded guards dressed in matching camouflage fatigues and a full color guard holding a mixture of KSS and Iraqi flags. Coffins for the dead are usually covered with Iraqi national (often painted onto the casket) and KSS flags. In most cases, the funeral processions resemble other funerals held for members belonging to Kata’ib Hizballah and Asa’ib Ahl al-Haq. 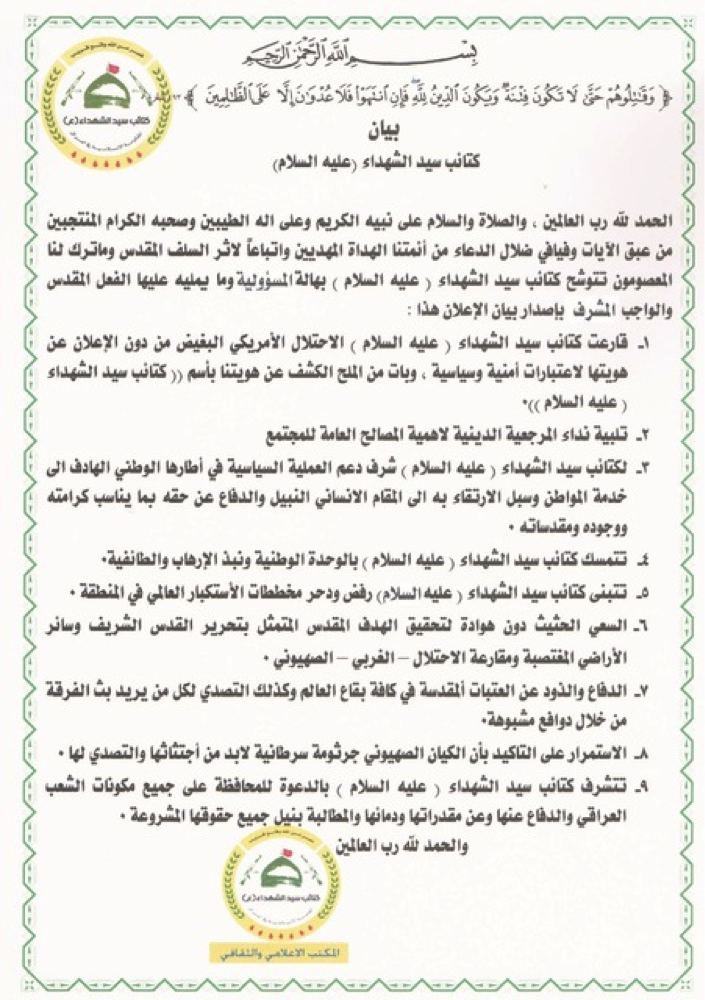 Figure 2: KSS statement released on May 8, 2013.
Following the funeral for Issawi, KSS declared its goals in a press statement issued by its media office. The group stated its aims included the protection of “shrines across the globe”, the preservation of “Iraqi unity”, and an end to sectarian conflict. It was claimed by KSS that its enemies were “Sowing [Islamic sectarian] discord” due to their “suspicious motives”. The group also mentioned that Israel is “Cancerous”, the U.S. occupation of Iraq was a symbol of “Arrogance”, and called for Jerusalem to be liberated.[9] For all intents and purposes, KSS repeated many of the main talking points presented by Lebanese Hizballah and Iran, albeit with an Iraqi spin.[10]
Despite the group’s statement claiming it was against sectarianism, some Iraqi forums reported the group had threatened to kidnap Iraqi Sunni Muslims.[11] Nevertheless, the KSS’s military activities appear to be limited to engagements in Syria.
WARNING: GRAPHIC IMAGES


Videos featuring KSS members have also been a relative rarity. Save for the posting of funeral videos made for fallen KSS members, only one video—posted on May 28, 2013—claims to be a KSS-specific combat video.  Released on YouTube, the film purports to show KSS members (likely attached to LAFA) operating in Syria and displaying the dead bodies of what the video refers to as, “Wahhabi Free Syrian Army mercenaries”. Further linking KSS to LAFA, the film was set to an Iraqi-made pro-Liwa’a Abu Fadl al-Abbas song, which first appeared online in early-2013. KSS members present in the film can also be seen wearing fatigues which are commonly worn by LAFA members.
When compared to LAFA and Lebanese Hizballah, social media and forum presence for Kata’ib Sayyid al-Shuhada has been sparse. What appeared to be a main Facebook “page” was created for the group on April 19, 2013.[12] However, the page conveyed little information and most posted material came on the day it was created or on April 26, 2013. The majority of the postings were of edited photos (mainly of the Zaynab Shrine) which could also be found on most pro-LAFA and pro-Hizballah websites. It is unknown whether the page was sanctioned by the group’s leadership. Membership for the page stands at fewer than 200. Additionally, a preponderance of those who “liked” the page lived in Baghdad, Iraq.
Facebook “Groups” have also been created for Kata’ib Sayyid al-Shuhada. Most of these groups have less than 300 members and tend to contain more information about the organization. Photos made specifically for KSS are present on these devoted KSS group pages. However, they tend to utilize imagery which has been used previously by LAFA. In general, KSS’s images are at times more amateurish than with other Shia militias operating in Syria.
The KSS’s dead maintain positions of prominence in KSS Facebook groups. On rare occasions, photos of live KSS members serving with LAFA have their faces blurred. One KSS group page even featured photos of what were presumably KSS fighters arriving by bus to the frontlines in Syria. Based on the captions provided for these and other photographs, it appears that KSS fighters may primarily originate from Basra, Iraq. Incidentally, the many mentions of Basra would also coincide with two of the three funerals for killed KSS members, since they also occurred in Basra. 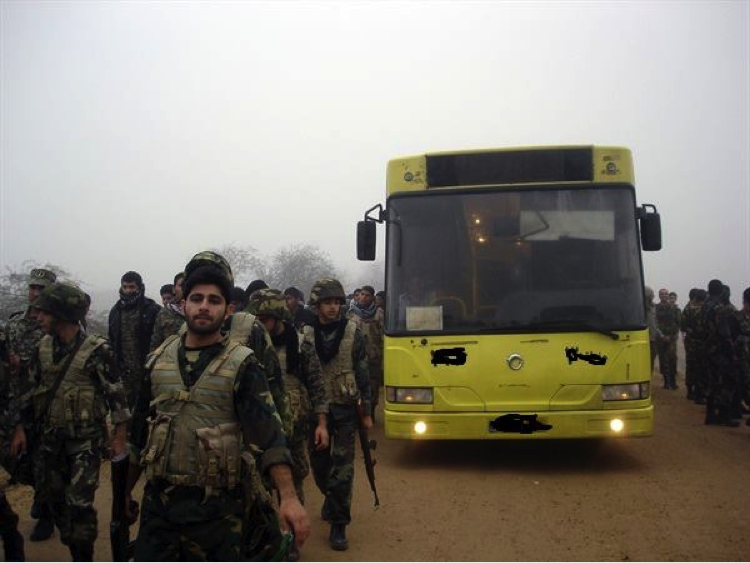 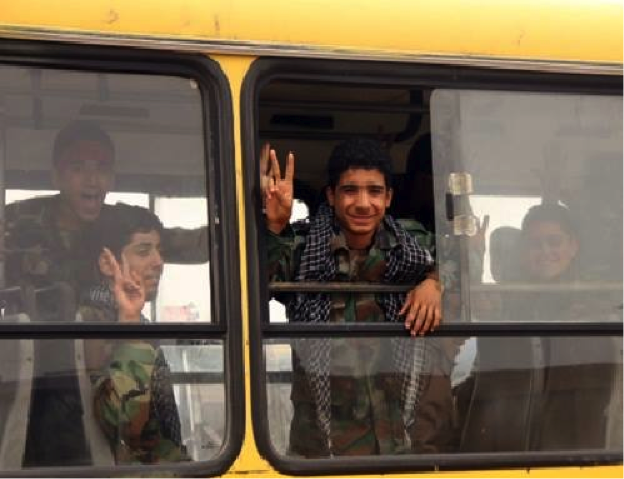 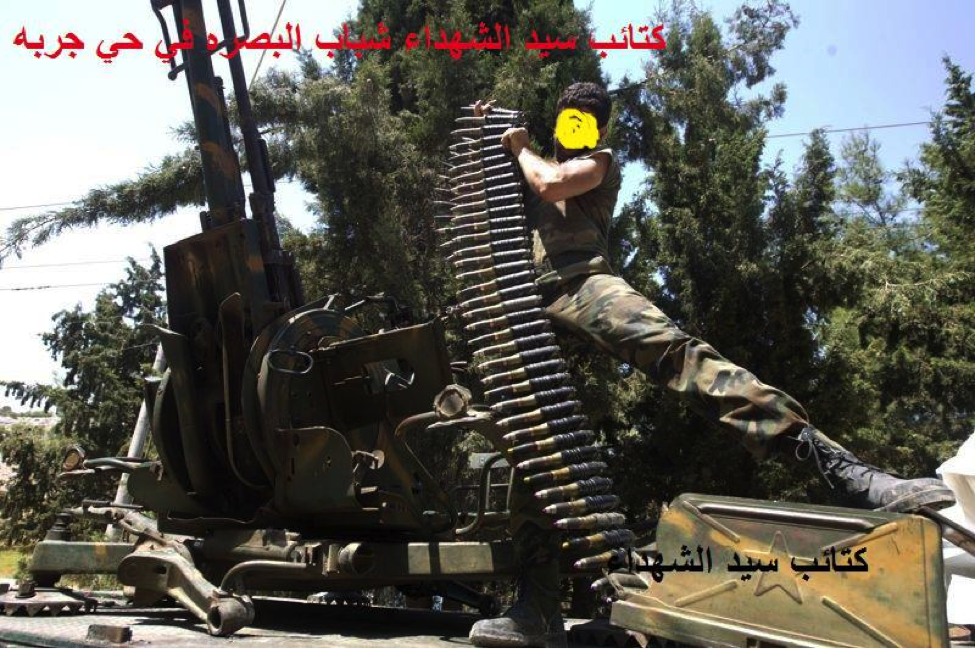 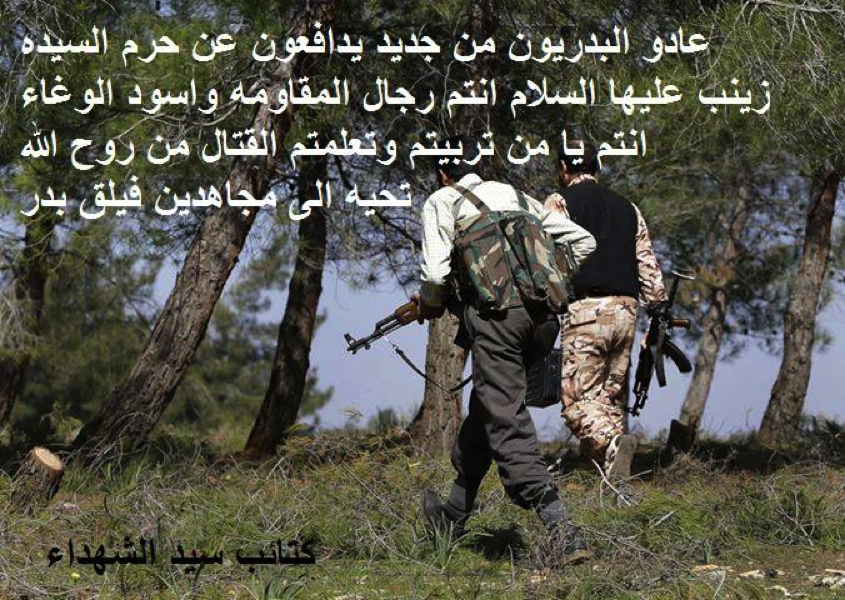 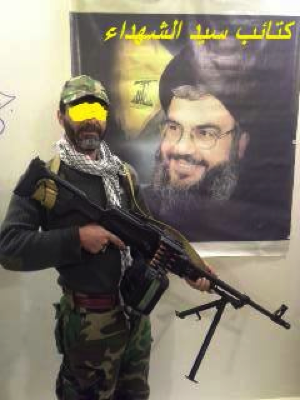 Figure 3: A KSS member is seen posing with a poster for Lebanese Hizballah leader Sayyid Hassan Nasrallah.
Underpinning the KSS’s Zaynab Shrine-centric role, their official symbol has a number of key images which emphasize Shi’ism, the Zaynab Shrine, and militarism. First, a stylized and green-colored image of Damascus’s Zaynab Shrine’s dome stands in the center with a red banner flying from the top. The raising of the red banner—symbolizing martyrdom and sacrifice—on top of the Zaynab Shrine has been used to great propagandistic effect by Shia groups such as Lebanese Hizballah and LAFA. The dome is flanked on two sides with images of AK-47 rifles. Around the dome on a roundel is a laurel wreath. At the bottom of the roundel are stylized blood drops. The blood drops may serve as a symbol to represent martyrdom. Additionally, they may also represent the blood shed by Shia leaders Abbas Ibn Ali and Husayn ibn Ali who were killed during the Battle of Karbala. The battle serves as a major formative incident in the creation of Shia Islam and highlights the Sunni-Shia split.
The group’s flag has their symbol set on a golden-yellow background. In some ways the KSS flag mirrors the official banners used for Hizballah.
While newer, less well-known, and often hazy with the information it supplies to the public, the fact that four KSS members have fallen in combat in Syria demonstrates that Kata’ib Sayyid Shuhada may be on the scene of the Sunni-Shia fight in Syria for some time to come. As a supplier of men for Liwa’a Abu Fadl al-Abbas, the KSS is an integral part of Iran’s proxy militia strategy to bolster the rule of Bashar al-Assad. However, it remains to be seen whether the KSS will attempt to grow as an organization, eventually be subsumed by Liwa’a Abu Fadl al-Abbas (or other Iraq-based pro-Iranian groups), or simply continue to be used as a conduit to supply more Iraqi Shia militiamen to Syria. 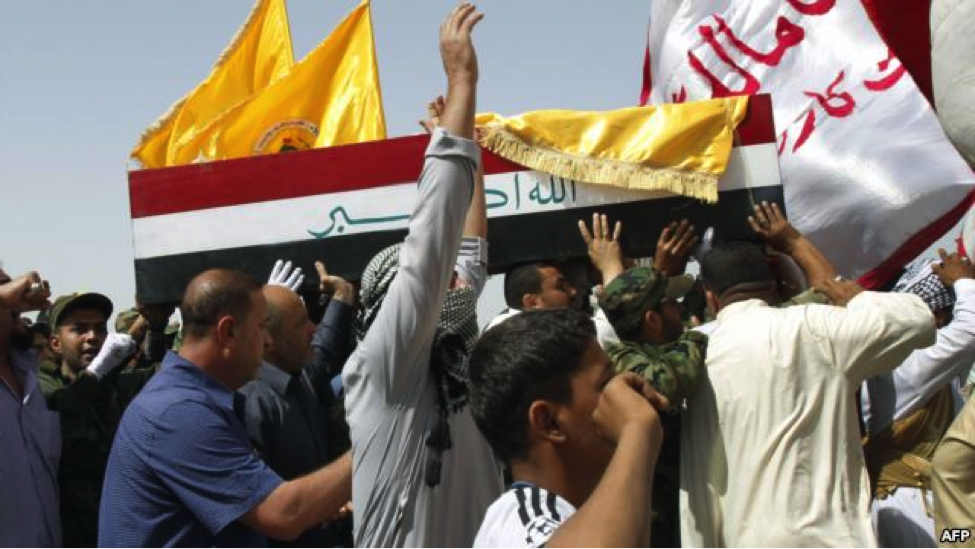 Figure 4: A partial glimpse of KSS’s flag can be seen here during a funeral for a member killed in Syria. Additionally, the casket’s uniformed honor guard is visible. (Photo credit: AFP) 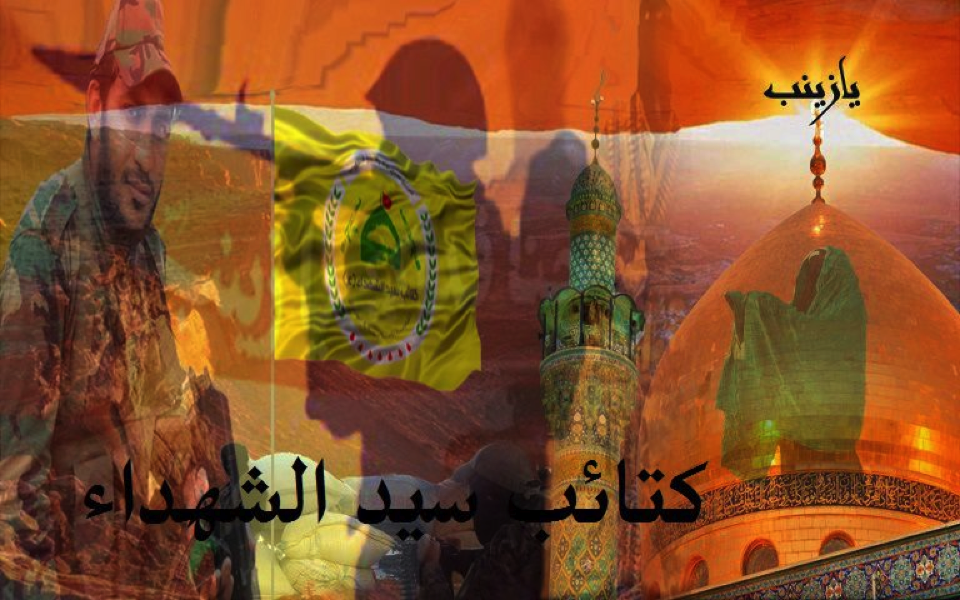 Figure 5: An internet propaganda poster for the KSS.  KSS’s flag is featured, along with one of the group’s dead, and the dome of the Zaynab Shrine. (Source: Facebook). 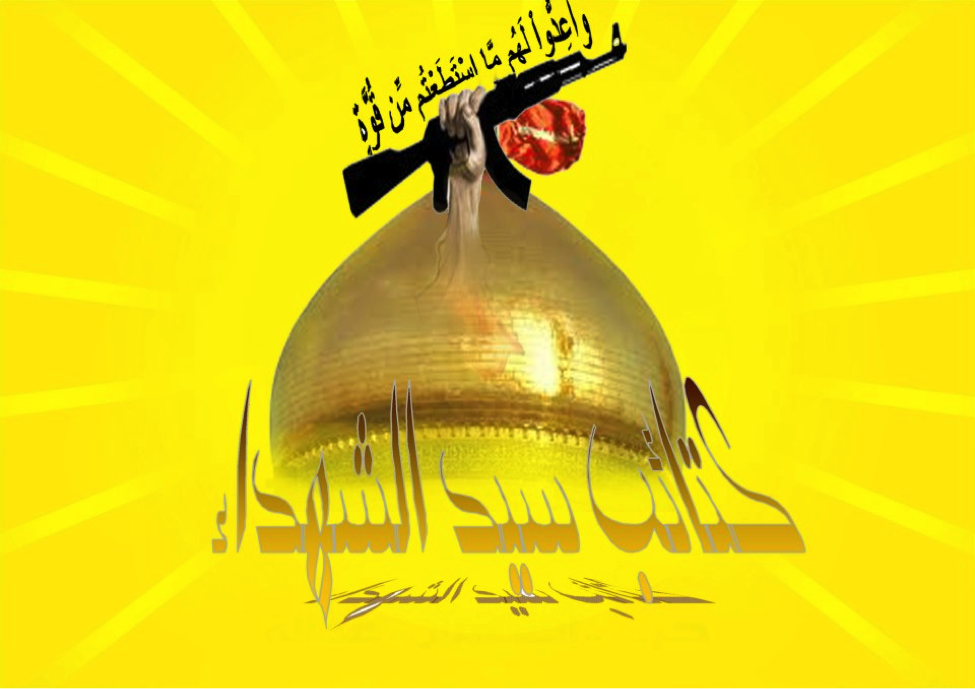 Figure 6: Another KSS symbol. The dome of the Zaynab Shrine is featured along with a Hizballahesque extended fist gripping an AK-47 rifle. The fist can be seen emerging from the dome and an outline of a map of Iraq. It’s important to note the gripped-rifle appears to be taken from one of Asa’ib Ahl al-Haq’s symbols. A red flag reading, “Ya Husayn” (“O Husayn!”) flies at the top of the dome. (Source: Facebook). 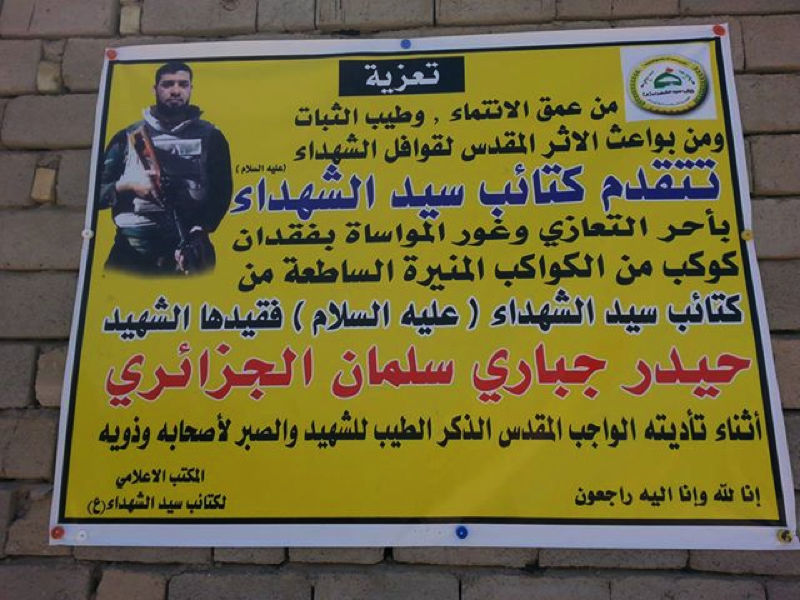