NOTE: For prior parts in the Hizballah Cavalcade series you can view an archive of it all here. Click here for part one of ‘Roundup of Iraqis Killed in Syria’.
–
By Phillip Smyth
Roundup of Iraqis Killed in Syria, Part 2
The latest installment of Iraqi Shia killed in Syria demonstrates a more publicly acknowledged level of Iranian involvement. Two bodies of Iraqi Shia fighters killed in Syria were returned to Iraq through the Iran-Iraq border. Family members of one of the dead Iraqis told the Associated Press that he had gone to Iran before heading to Syria.[1]
The make-up of Liwa’a Abu Fadl al-Abbas’s (LAFA) — a Syrian-based Shia militant group—membership was also exposed. Demonstrating a slight departure from earlier martyrdom announcements, Asa’ib Ahl al-Haq (AAH) more broadly acknowledged that their fighters in Syria operate exclusively under LAFA’s moniker. Earlier announcements listed only one of AAH fighters as serving with LAFA.
Three of the Iraqis killed were reportedly not claimed as members by any Iraqi Shia parties (including pro-Iranian Iraq-based groups). This partially fits with LAFA’s narrative that they are staffed by volunteer fighters from throughout the Shia Islamic world. However, with the recent revelations, it becomes clearer that LAFA fighters are most likely vetted and trained by Iran before heading off to fight in Syria.
_
Name: Ala’a Muhsen Shahib al-Tamimi
Affiliated With: Asa’ib Ahl al-Haq/Liwa’a Abu Fadl al-Abbas
Death Announced: May 15, 2013. His death was first announced on Facebook. 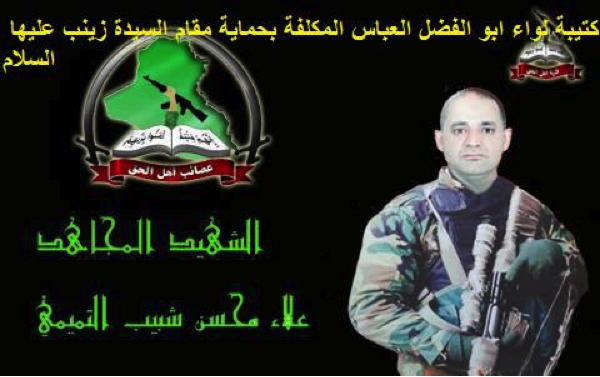 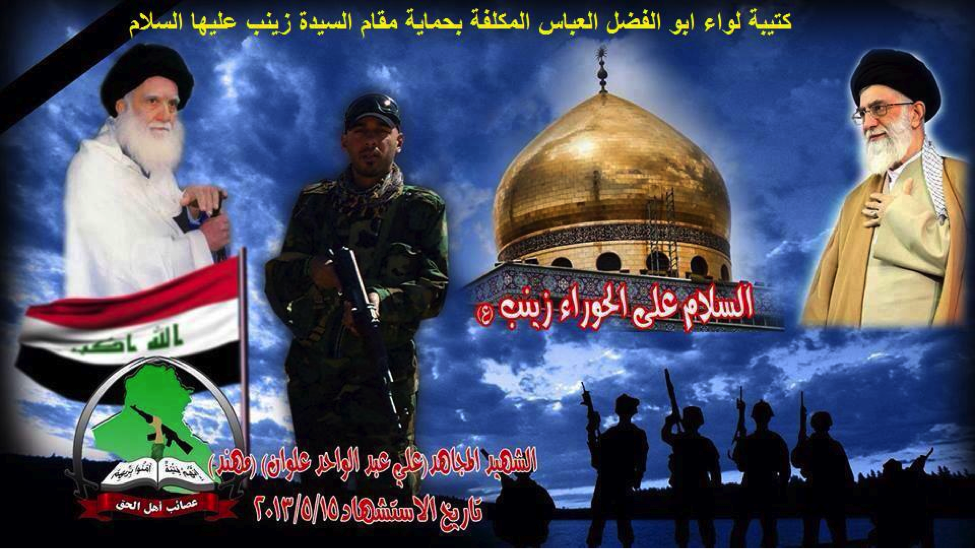 Name:  Muhammed Aboud al-Maliki (A.K.A. Mohammed Aboud)
Affiliated With: Liwa’a Abu Fadl al-Abbas
Death Announced: May 17, 2013. Funeral held on May 17, 2013.
Notes: According to Elaph.com, Muhammed Aboud al-Maliki was a 27 year old Iraqi from Basra. Elaph also said he was not claimed by any Iraqi organization as a member. It was also reported by the Associated Press that Aboud went to Iran before heading to fight in Syria. Maliki’s body and that of fellow fighter Hassan Ali Farhud were also transferred back to Iraq via Iran. Since it was announced he was killed fighting around Damascus’s Zaynab Shrine, it is possible he was fighting as a member of Liwa’a Abu Fadl al-Abbas. One released photo of Muhammed Aboud al-Maliki, which was posted on pro-Lebanese Hizballah and pro-Liwa’a Abu Fadl al Abbas Facebook pages, also claimed he belonged to Liwa’a Abu Fadl al-Abbas.
The released photo may also point to al-Maliki’s training influences. Holding the magazine of the rifle is a common fire-control technique used by Hizballah and is featured in a number of their propaganda videos. 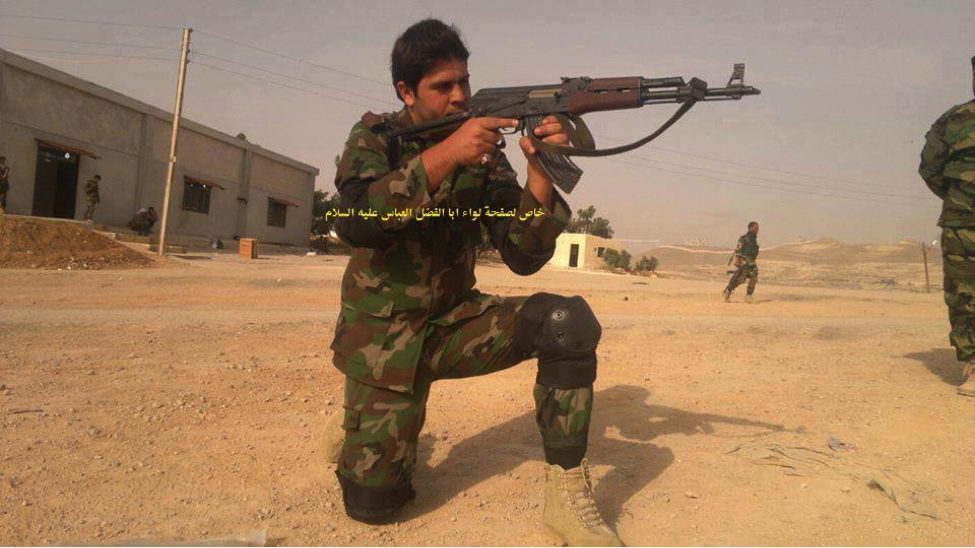 Name:  Hassan Ali Farhud
Affiliated With: Liwa’a Abu Fadl al-Abbas* (?)
Death Announced: May 17, 2013. Funeral held on May 17, 2013.
Notes: According to Al-Sumaria News, Farhud was a 32 year old from Basra, Iraq. His body, along with Muhammed Aboud al-Maliki (see above) were returned to Iraq via Iran. It is unknown whether he engaged in training in Iran or which group he served with. Since it was reported he was killed fighting around the Zaynab Shrine in Damascus, it can be assumed he was part of Liw’a Abu Fadl al-Abbas. At the time this was written, no photos of Farhud were released.

Name:  Diya Mutasher al-Issawi
Affiliated With: Liwa’a Abu Fadl al-Abbas
Death Announced: May 5, 2013. Funeral held on May 6, 2013.
Notes: The Iraq-based Buratha News Agency reported the 30 year old was originally from Iraq’s Basra province. Issawi was not claimed by any Iraqi party as a member. Also, it is unknown whether Issawi was trained in Iran or elsewhere.