NOTE: For prior parts in the Hizballah Cavalcade series you can view an archive of it all here.
–
Liwa ‘Abis: A New Active Militant Group in Bahrain
By Phillip Smyth 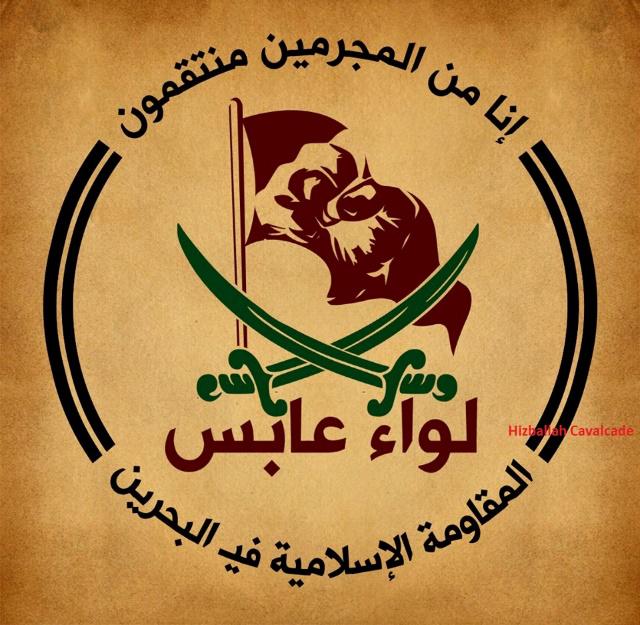 Figure 1: Liwa ‘Abis’s logo.
Liwa ‘Abis (the ‘Abis Brigade) declared their existence in an announcement dated April 7, 2014 and released it on Facebook and Twitter on April 8. The group’s first announcement declared they were joining those who “preceded” them in “jihad and resistance” against the “oppressors,” meaning the government of Bahrain. As with other radical anti-government organizations, which utilize force, Liwa ‘Abis call their enemies, meaning Bahrain’s internal security forces, “mercenaries.” This terminology is common among Bahraini militant organizations. According to Liwa Abis’s, their attack(s) are representative of the “legitimate jihad” they were waging against the government of Bahrain. Combined with the group’s self-description as “Al-Muqawama al-Islamiyya fi Bahrain” (“The Islamic Resistance in Bahrain”), the group appears to share many themes with other Bahraini militant organizations. 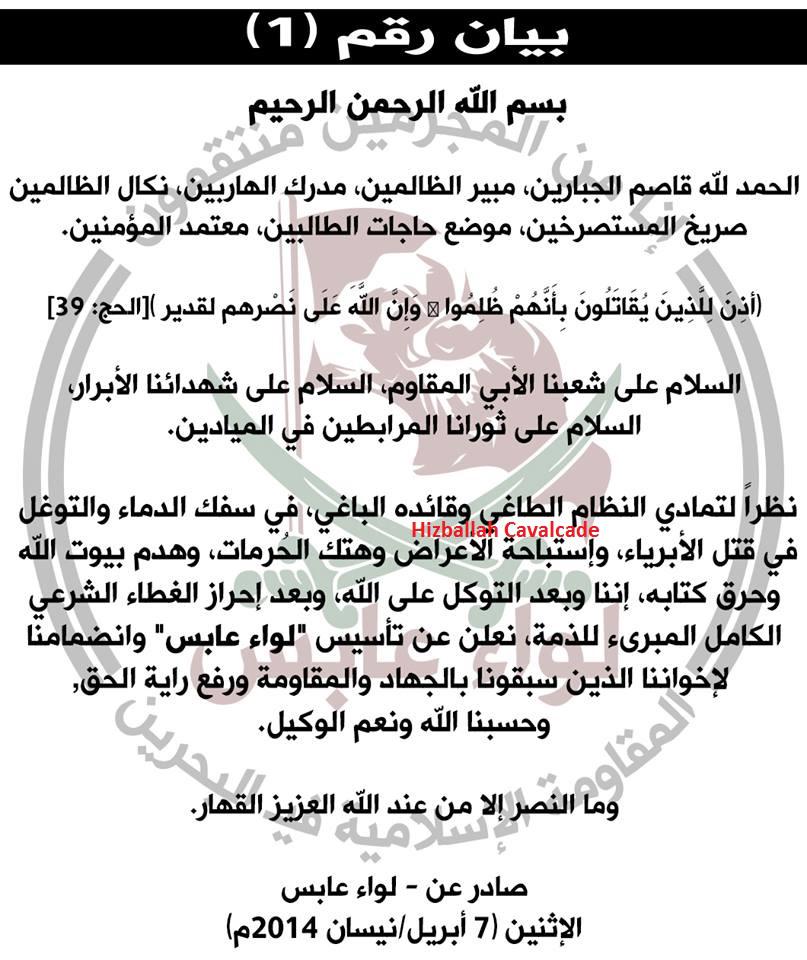 Figure 2: Liwa ‘Abis’s first announcement.
Liwa ‘Abis’s Targets & Their War on the “Occupier’s Economy”
A developing trend among Bahraini militant groups has been to target infrastructure and economic targets. Saraya al-Mukhtar has attacked Automatic Teller Machines (ATMs). Attacks against ATMs occurred in January, February, and March, 2014. These activities led the U.S. Department of State to issue specific travel warning instructions to U.S. citizens in Bahrain, telling them to, “Use caution when approaching ATMs, particularly at night and early morning, by scanning the area for items that are out of place or suspicious to the area in general.”[1]
Liwa ‘Abis appears to have also adopted a strategy of attacking economic targets. These targets have included structures—which the group has argued—assist with the “Saudi occupation” and the Bahraini government. 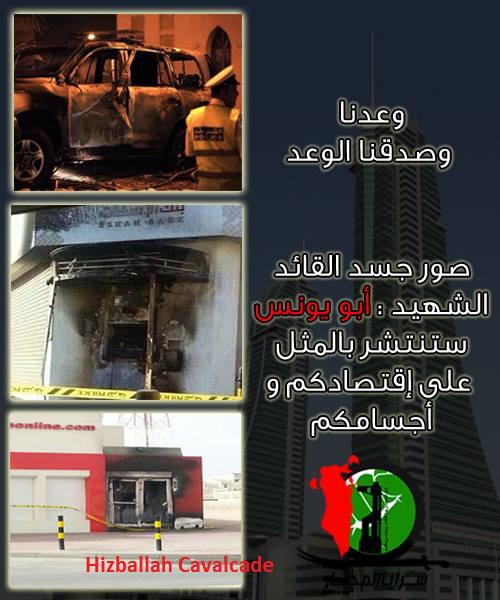 Figure 3: A Saraya al-Mukhtar edited image showcasing their targeting of economic interests. Bombed-out banks and ATMs are shown on the left. The Bahrain Financial Center—likely a broader warning that other pillars of the Bahraini economy will be targeted—is used as a background on the right.
In late-April, a Liwa ‘Abis operation claimed to attack a factory. Their statement said this plant was flying the flag of the “Saudi occupation” and that the owner of the structure supported the government. The attack on the factory was also claimed to be the first in a campaign the group launched, which coincides with protests of the same name: “Symptoms of the Intifada.” Liwa ‘Abis referred to their operation as “Symptoms of the Intifada 1.”
Interestingly, the statement also claims that the “Rijal Allah” or “Men of God” of “Saraya ‘Abis” (the ‘Abis Brigades) conducted the attack.  The term “Rijal Allah” has been adopted by Iranian-backed Shia Islamist militants operating in Syria. 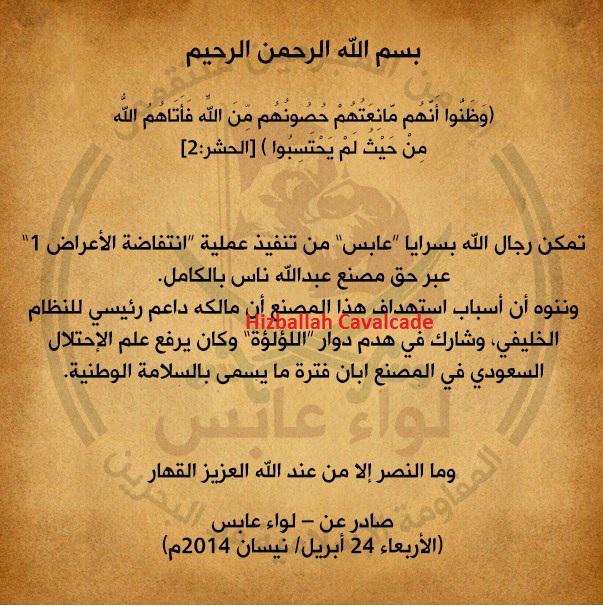 Liwa ‘Abis has also claimed attacks against the Bahraini police. On April 11, 2014 the organization claimed on Facebook that they had attacked a police station in Sitra. The group stated the attack was to gain vengeance for Hasan Mushaima, an exiled anti-government Bahraini Shia leader of the Haq Movement. Attacks by firebomb wielding youths against police stations in Sitra have occurred since 2012.[2] Additionally, Sitra has also been the scene of improvised explosive device-based attacks against Bahraini internal security forces.[3]
Symbolism
Liwa ‘Abis’s name likely refers to ‘Abis bin Abi Shabib, one of Imam Husayn’s loyal, militarily prominent, and powerful companions during the Battle of Karbala.[4]
The group’s logo features two crossed green swords and a red banner with a fist emblazoned on it. The stylized fist, which bears a striking similarity to the fist featured on the logo of Saraya al-Mukhtar. These images are encapsulated in a circular shaped combination of lines and text. As with other Bahraini militant groups, it’s possible the circle may represent the pearl, a symbol of Bahrain.
On the top of the group’s symbol sits a section from Quran 32:22. The entire passage from the Quran reads “And who is more unjust than one who is reminded of the verses of his Lord; then he turns away from them? Indeed we, from the criminals, will take retribution.” This is a clear reference to a number of themes expressed by Bahraini militants, particularly those affiliated with Saraya al-Mukhar. The first is “revenge” for perceived crimes against protesters executed by forces belonging to the Bahraini government. Another theme surrounds how militants consider the ruling Khalifa royals. Using a passage like Quran 33:22 may suggest these groups consider the Khalifas and those who support them to be infidels. Additionally, charges by government media organs which consider militants to be terrorists and vandals are also addressed with the Quranic passage, by flipping the tables and accusing the government of being the true criminals.
___________
[1] See: https://photos.state.gov/libraries/saudi-arabia/323264/riyadh/security_message_for_u_s_citizens-bahrain_situaiton_3-6-2014.pdf
[2] See: https://youtu.be/3mUPS6Eq4Hk. This clip was released in April, 2013.
[3] See: https://www.bbc.co.uk/arabic/middleeast/2013/07/130707_bahrain_bomb_sitra.shtml.
[4] See: https://www.islamquery.com/documents/companions%20of%20Imam%20Husain.pdf.