NOTE: As with all guest posts, the opinions expressed below are those of the guest author and they do not necessarily represent the views of this blogs administrator and does not at all represent his employer at the Washington Institute for Near East Policy.
Jihadology.net aims to not only provide primary sources for researchers and occasional analysis of them, but also to allow other young and upcoming students as well as established academics or policy wonks to contribute original analysis on issues related to jihadism. If you would like to contribute a piece, please email your idea/post to azelin [at] jihadology [dot] net.
Past Guest Posts:
Hazim Fouad, “Salafi-Jihadists and non-jihadist Salafists in Egypt – A case study about politics and methodology (manhaj),” April 30, 2013.
Daveed Gartenstein-Ross and Tara Vassefi, “Perceptions of the “Arab Spring” Within the Salafi-Jihadi Movement,” November 19, 2012.
Jack Roche, “The Indonesian Jamā’ah Islāmiyyah’s Constitution (PUPJI),” November 14, 2012.
Kévin Jackson, “The Pledge of Allegiance and its Implications,” July 27, 2012.
Behnam Said, “A Brief Look at the History and Power of Anasheed in Jihadist Culture,” May 31, 2012.
Jonah Ondieki and Jake Zenn, “Gaidi Mtaani,” April 24, 2012.
Joshua Foust, “Jihadi Ideology Is Not As Important As We Think,” January 25, 2011.
Charles Cameron, “Hitting the Blind-Spot- A Review of Jean-Pierre Filiu’s “Apocalypse in Islam,” January 24, 2011.
Daveed Gartenstein-Ross, “Why Jihadi Ideology Matters,” January 21, 2011.
Joshua Foust, “Some Inchoate Thoughts on Ideology,” January 19, 2011.
Marissa Allison, “Militants Seize Mecca: Juhaymān al ‘Utaybī and the Siege of the Grand Mosque in Mecca,” June 9, 2010.
— 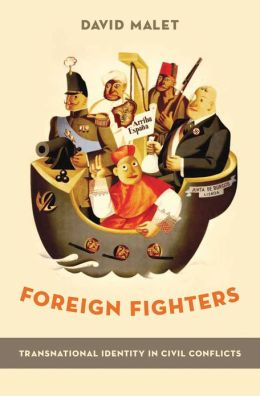 A Review of David Malet’s Foreign Fighters: Transnational Identity in Civil Conflicts, Oxford University Press, 2013.
By Mark Youngman
In David Malet’s new book, Foreign Fighters: Transnational Identity in Civil Conflicts he seeks to expand discussion of the involvement of foreign nationals in insurgencies beyond the contemporary focus on Islamic extremists and to place transnational jihadists in a broader historical context.  Through a rigorous methodology and in-depth case studies, he challenges simplistic explanations for the transnational insurgent phenomenon and identifies a defensive framework common to recruitment messages, regardless of conflict type.  Although the methodology employed faces certain challenges, this work succeeds in making a valuable and – given current events in Syria – timely contribution to our understanding of transnational insurgencies.
The Salience of Ethnicity
Out of 331 conflicts contained within two databases that provide the basic data for analysis – the Correlates of War (COW) Instrastate War 1816-1997 and Uppsala-PRIO Intrastate Conflict 1946-2005 databases – Malet identifies 70 involving transnational insurgents.  These are coded according to whether the conflict was ethnic or not, and whether the foreign fighters were of the same ethnicity as the insurgent group, creating four conflict types:  Diasporans (Type 1: ethnic conflict, coethnic fighters); Liberationists (Type 2: ethnic conflict, non-coethnic fighters); Encroachers (Type 3: nonethnic conflict, coethnic fighters); and True Believers (Type 4: nonethnic conflict, non-coethnic fighters).  Four case studies, each representative of one of the types, put the flesh on the bone:  the Texas Revolution (1835-36); the Spanish Civil War (1936-1939); the Israeli War of Independence (1947-49); and Afghanistan (1978-1992) and the subsequent activities of transnational jihadists.
Neither Money Nor Martyrdom
Malet challenges the theory that mercenary motives are sufficient for understanding the decision to join, noting that promises of material reward are often not credible and would be undermined by efforts to secure foreign funding.  On the contrary, recruiters “typically explicitly inform volunteers prior to their enlistment that their services will bring minimal, nonguaranteed payments.”  Nor do Islam, promises of martyrdom, or ethnic kinship offer universal explanations, since “most foreign fighters are secular; they and others have shared neither ties of ethnic kinship nor homeland with the local insurgents they joined.”
Instead, Malet finds that “insurgencies try to recruit foreign fighters by framing distant civil conflicts as posing a dire threat to all members of a transnational community” shared by foreign recruits and insurgents.  In other words, recruitment messages utilize a defensive framework, and reframe conflicts as threatening a different group when seeking to expand their appeal.  Ethnicity is not the only value uniting recruits and insurgents and, in fact, transnational insurgencies occur most often in nonethnic conflicts.  However, recruitment usually occurs via social networks linking these transnational communities, and “potential recruits are generally highly connected to these identity subgroups rather than to their wider national society.”  Malet also finds that transnational insurgencies are disproportionately effective, although “it may simply be the case that the best organized and most effective insurgencies were those that also had the capacity to recruit abroad.”
The Challenges of Data
Perhaps the greatest difficulty facing Foreign Fighters is one common to many studies of political violence, and one that the author himself acknowledges:  scarcity of data.  Information was insufficient to allow for an evaluation of the differences between successful and unsuccessful recruitment campaigns, since failed recruitment efforts are rarely documented.  Data quality is not uniform over time, meaning that the involvement of foreign fighters in some conflicts was also likely not documented.  And case studies were selected not just for their representativeness, but also for the availability of records.
Other weaknesses are inherent to the methodology:  Any attempt to slot social conflicts into tidy categories will fail to capture all the complexities and nuances of those conflicts.  Coding conflicts as ethnic or otherwise – when ethnicity can play an important role even in nonethnic conflicts – is just one example.  The coding system also does not really allow for the possibility of a conflict itself – rather than its messaging – shifting from one type to another (for example, from Type 2 to Type 4), unless a specific event, such as a change of government, marks the shift.  Nevertheless, any classification system would face these difficulties, and almost all are clearly acknowledged by the author himself.
A Solid Foundation
Overall, Foreign Fighters represents a carefully researched and well-caveated study.  Current and future conflicts may provide greater opportunity for testing the universality of the defensive framing and for identifying other commonalities and differences in recruitment.  The conflict in Syria – which involves transnational insurgents fighting for both sides and for divergent motives – will certainly present an interesting test case.  But Malet’s work has provided a solid platform for future debate.
Mark Youngman is  a postgraduate studying terrorism at the University of St Andrews, specializing in Russia’s North Caucasus