NOTE: For prior parts in The Archivist series you can view an archive of it all here. And for his older series see: Musings of an Iraqi Brasenostril on Jihad.
—
Unseen Documents from the Islamic State’s Diwan al-Rikaz
By Aymenn Jawad Al-Tamimi

The Diwan al-Rikaz (Department of Precious Resources) is one of the Islamic State’s [IS] bureaucratic wings that have emerged since the announcement of the Caliphate on 29 June 2014. Literally, al-Rikaz refers to anything that can be extracted from the ground. In that regard, the Diwan has a number of sub-divisions, most notably including oil and gas as well as antiquities. Mining and trading of minerals also fall under the Diwan al-Rikaz’s authority. Previously I have covered some specimen documents from the Diwan al-Rikaz, such as the leasing of gasoline stations in Mosul, oil and gas distributions to the local population, oil and gas sale receipts and permission for excavating antiquities.

As with other IS departments, co-optation of existing structures is key as part of the emphasis on authorization and oversight of activity, particularly when it comes to oil and gas resources. Compare, for instance, with the Diwan al-Siha (Health Department) requirement for new pharmacies and clinics to have its stamp of approval.

Though some skilled engineers may exist among the ranks of the muhajireen who join IS, IS will in the main part have to rely on the personnel and infrastructure already there for the oil and gas industries: a case-in-point being the Diwan al-Rikaz order for employees of the gasworks in Ramadi to register and undertake regular duties a few weeks after the city fell to IS. Co-optation might entail having to pay additional fees to convince personnel to operate under IS authority. Further, problems may arise with inability to repair and update infrastructure, significantly reducing potential for extraction of resources and production for commercial use.

As these points are often not taken into consideration, the contribution of oil and gas revenues to IS finances has been overstated- an observation corroborated by the leaked financial records from Deir az-Zor province, IS’ richest oil and gas holdings. Further, conventional wisdom tends to place too much emphasis on smuggling to the outside world- where even more cuts to final profits occur in the form of middlemen- at the expense of meeting domestic needs for oil and gas.

The IS emphasis on regulation also applies to other sub-divisions of the Diwan al-Rikaz, as illustrated in the documents from the Abu Sayyaf raid. For example, in one of the documents, the General Supervisory Committee stresses that only those with permits issued by the Diwan al-Rikaz can excavate antiquities. An overlooked aspect of the regulation is that authorized dealings in antiquities generally seem to be required to be confined within IS provincial boundaries (or at least the boundaries of IS territory).

This makes sense when one considers what form revenue for IS from the sale of antiquities primarily appears to take: namely, a portion of the money a licensed excavator gains from the direct sale of antiquities is to be paid in taxation to the Diwan al-Rikaz. Such a picture is contrary to the popular conception of a pervasive, authorized chain of smuggling onto the international black market, which, as is the case with smuggled oil, would involve middlemen taking considerable slices of the proceeds and thus likely prove less profitable to IS.

Indeed, after Palmyra fell into IS hands, the Diwan al-Khidamat (services department) issued a notification prohibiting moving of and dealing in artifacts found in the town of Palmyra for outside the borders of Wilayat Homs. Similarly, note some receipts recovered from the Abu Sayyaf raid refer to antiquities sold in WIlayat al-Kheir (Deir az-Zor province). Likewise, a friend in Azaz tells me that IS has arrested and imprisoned people who have tried to smuggle statues and other artifacts into rebel-held areas. None of this means that there has been no smuggling of antiquities and the like from IS-held territories onto the international black market, or that certain corrupt IS officials are not involved in such a process. Rather, the point is that the revenue for IS mainly seems to come from taxation after direct sale following excavation.

Below are some more unseen specimen documents I have obtained to shed further light on the operations of the Diwan al-Rikaz. All of them illustrate the central theme of regulation I have noted above. Specimen B in particular shows an aim to stamp out smuggling through the northern borders to Turkey. As shown in the Deir az-Zor province financial records, confiscations play an important role in IS revenue, and confiscation of resources and goods moved without authorization of the Diwan al-Rikaz likely generates considerable revenue as well within that framework. Two names that recur in these documents- Abu al-Layth al-Furati and Abu Omar al-Falastini- appear to be heads of the Diwan al-Rikaz in Homs and Aleppo provinces respectively. 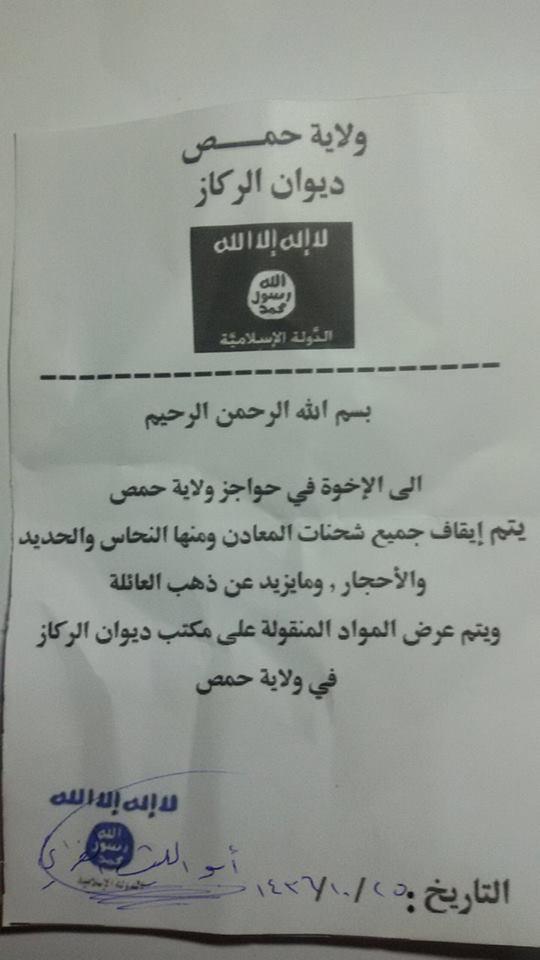 To the brothers in the checkpoints of Wilayat Homs

One must stop all cargoes of minerals, including copper, iron, [precious] stones and what exceeds family gold. The transferred goods are to be sent for examination to the office of the Diwan al-Rikaz in Wilayat Homs. 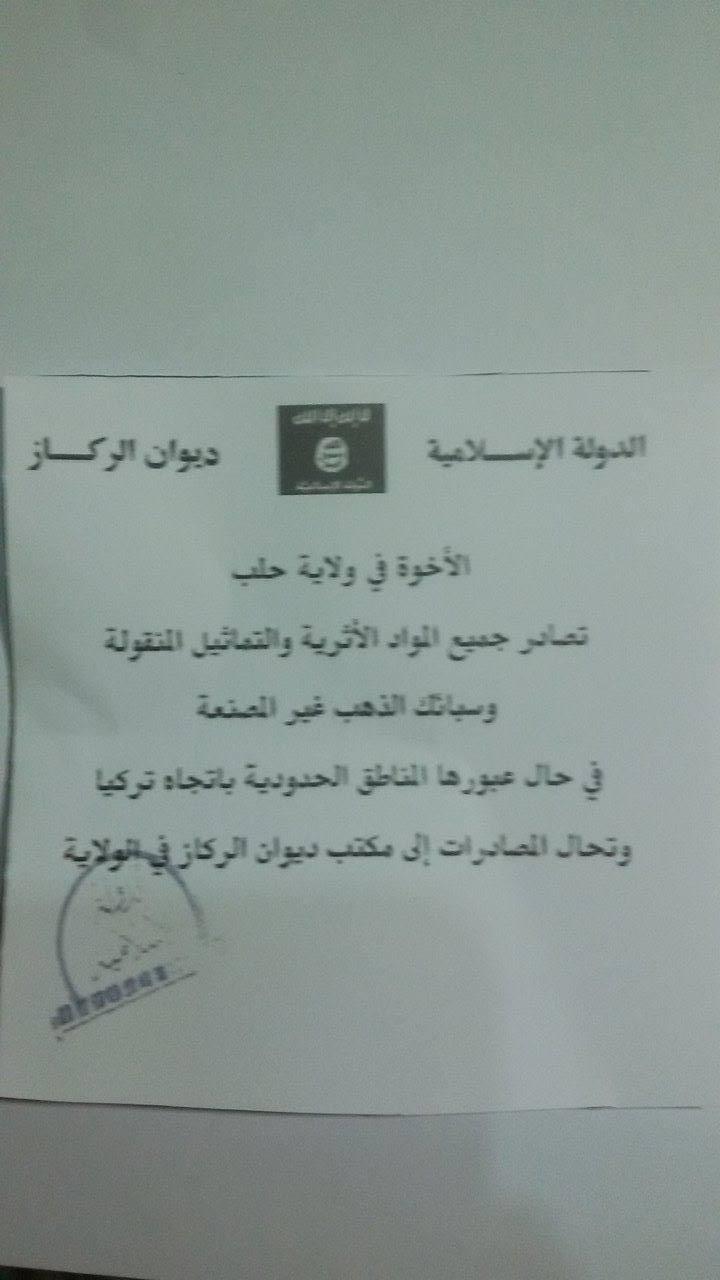 All antiquities, moved statues and unprocessed gold bullions are to be confiscated in the event that they are being passed through the border areas towards Turkey. And the confiscated goods are to be referred to the Diwan al-Rikaz office in the wilaya. 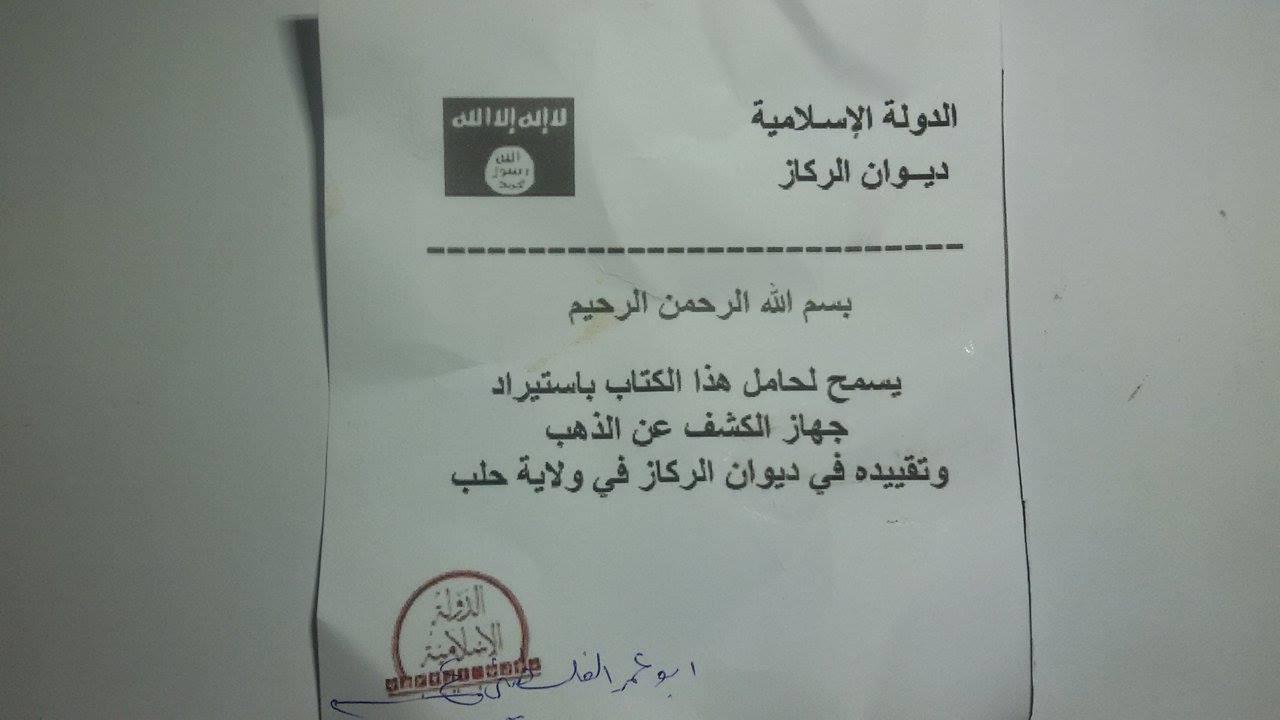 The bearer of this document is permitted to procure equipment to search for gold and register it in the Diwan al-Rikaz in Wilayat Halab. 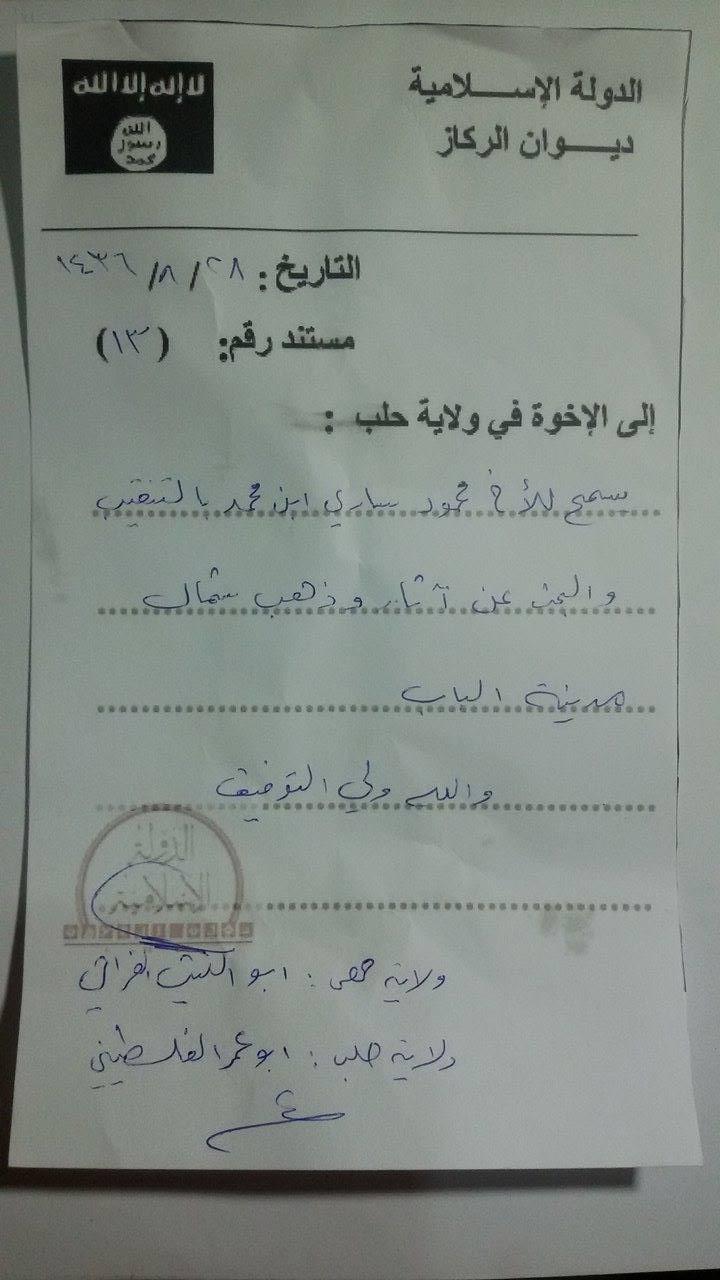 To the brothers in Wilayat Halab

The brother Mahmoud Sari ibn Muhammad has been permitted to excavate and search for antiquities and gold north of the town of al-Bab. And God is the guarantor of success.