NOTE: For prior parts in The Archivist series you can view an archive of it all here. And for his older series see: Musings of an Iraqi Brasenostril on Jihad.
—
Critical Analysis of the Islamic State’s Health Department
By Aymenn Jawad Al-Tamimi

The Islamic State’s [IS] health department (Diwan al-Siha) is probably most familiar to UK readers, who will recognize the ‘ISHS’ (Islamic State Health Service) branding as a spin-off of the ‘NHS’ (National Health Service). The ISHS was promoted in an official Raqqa province video featuring two muhajireen medical personnel, the first of whom (originally from Australia) urges Muslim medical personnel from around the world to join IS, saying: “Muslims here are really suffering from not necessarily a lack of equipment or medicine but mainly a lack of qualified medical care.” Though the video acknowledges lack of personnel, documents not officially released by IS also show that shortages of medical supplies are a significant problem. Of all departments, the IS Diwan al-Siha is arguably the least impressive, afflicted as it is by brain drain, deficiencies in supplies and lack of innovation despite the influx of muhajireen.
Lack of innovation is a matter I have touched upon before, illustrating as a case-in-point that vaccination schedules in Syria are no different from the prior status quo. In Mosul, one will find that the department of forensic medicine, which issued death certificates in the days of government control, still exists, only now it seems to be issuing death certificates under IS rule, most likely in particular in the name of its judiciary department known as the Diwan al-Qada (wa al-Mazalim). Salaries of health workers in Ninawa also continue to be paid by the Iraqi central government. This above all represents parasitic co-optation.
On the subject of manpower, numerous documents point to brain drain as the main cause of lack of qualified medical staff. For instance, in May 2015, the Diwan al-Siha, General Supervisory Committee (which can issue general directives to IS provinces and bureaucratic departments) and the Diwan al-Qada in Wilayat Ninawa issued a joint statement giving an ultimatum for doctors, pharmacists, medical and nursing professors and other health staff who had fled to return within 30 days or face confiscation of their homes as real estate under the Diwan al-Qada. The statement justifies this ultimatum on the grounds that many means of persuasion had been tried but to no avail.
It should be noted that this was not the first ultimatum issued in response to the medical brain drain problem. A similar threat of confiscation of property was issued in October 2014 by the Diwan al-Qada targeting Mosul University medical staff, board administrators and students who had left for Baghdad and Kurdistan to complete their studies, unless they returned within 10 days. 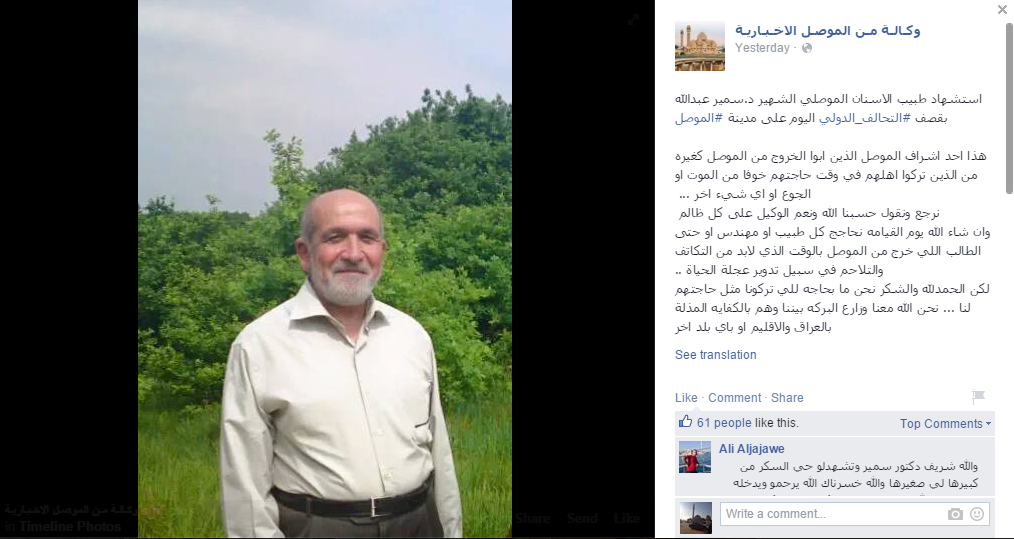 Despite these ultimatums, the dearth of medical personnel continues. On 19 August 2015, the pro-IS Facebook page “News Agency from Mosul” posted an obituary for the prominent dentist Dr. Samir Abdullah (photo above), who was reportedly killed in “international coalition bombing” on Mosul. The page added: “This man was one of the noble ones of Mosul who refused to leave Mosul, unlike others who abandoned their people in their time of need, fearing death, hunger or anything else…God willing on the Day of Judgment we will dispute with every doctor, engineer or even student who left Mosul in the time when solidarity and standing together in the path of turning the wheel of life were needed, but praise and thanks be to God we do not need those who abandoned us as they need us.”
On a more general level, some IS fatwas issued by the Diwan al-Eftaa’ wa al-Buhuth but not released in IS media outlets point to a shortage of female doctors. For example, fatwa no. 43 posits the following question: “What is the ruling on the presence of male doctors for women’s illnesses given that there are female doctors specialising in women’s illnesses but are few in number?” The response stipulates that the “principle is that the women should go to a female doctor to treat her and she should make an effort to look for that,” only resorting to a male doctor by necessity. In this case, part of the problem here is IS’ dogmatic insistence on preventing what it sees as sinful gender mixing in public.
Fatwa no. 37 appears to acknowledge that the quality of medical service inside IS territory may not quite match that of territories outside its rule, as travel to ‘Dar al-Kufr’ (the abode of disbelief) is permitted if a medical condition cannot be treated inside ‘Dar al-Islam’ (the abode of Islam: i.e. the Caliphate), responding to a particular question about whether one could travel to “areas of the [Assad] regime out of need.” Similarly in Mosul, a condition under which travel to non-IS areas is allowed is a certified document from the Diwan al-Siha that one’s illness cannot be treated inside Wilayat Ninawa (which, of all IS-held areas, will have the most developed health infrastructure).
Undoubtedly in response to the exodus of medical personnel and students and shortages, IS has been keen to encourage new cohorts of medical students, thus the opening of a medical college in Raqqa city, trying to elevate IS’ de facto Syrian capital to the same level as its de facto Iraqi capital of Mosul whose university already had a medical college. This month I have also found a statement from the Diwan al-Siha’s “Medical Sciences University” (this appears to be a new name for the medical college of Mosul University) encouraging applications from graduated high school students. Statement and full translation below.
Specimen A 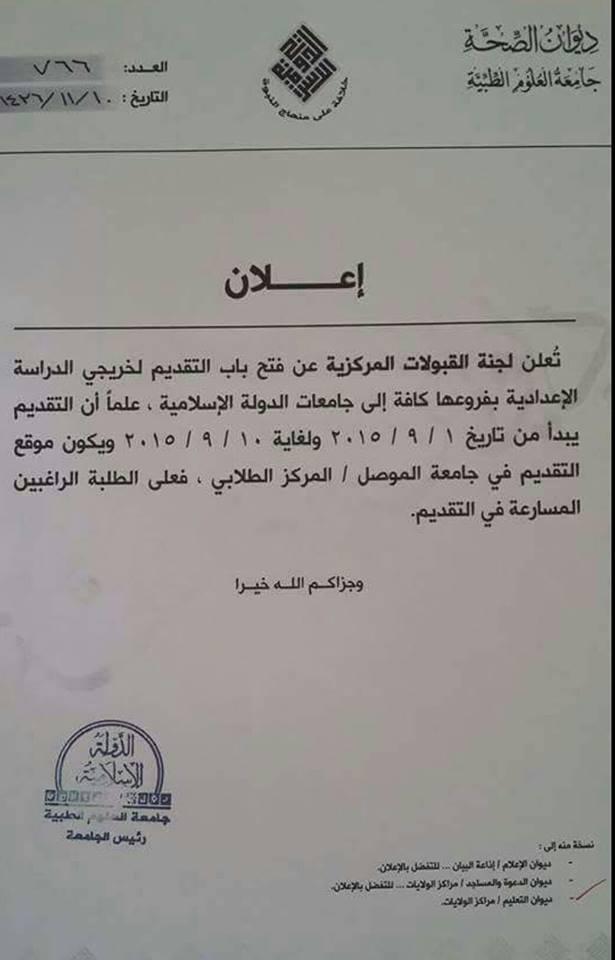 “Diwan al-Siha
Medical Sciences University
Caliphate on the Prophetic Methodology
No. 766
Date: 1 Dhu al-Q’ida 1436 AH [16 August 2015]
Announcement
The Central Acceptances Committee announces the opening of the door if application for preparatory study graduates in all its divisions to the universities of the Islamic State. Let it be known that application begins on 1 September 2015 until 10 September 2015, and the place of application will be in Mosul University/Students Centre. So students wishing to apply should hurry to do so.
And may God reward you best.
Islamic State
Medical Sciences University
Head of the University
Copy to:
– Diwan al-‘Ilam [Media Department]: Idha’at al-Bayan [the radio station]- to go ahead to broadcast
– Diwan al-Da’wa wa al-Masajid: Wilayat Centres- to go ahead to broadcast
– Diwan al-Ta’aleem: Wilayat Centres”
Problems in equipment and medical provisions foremost come to light in documents showing the Diwan al-Siha’s attempts to introduce price controls on pharmaceutical goods and operations. For instance, in October 2014, price limits were introduced for childbirth operations in Deir az-Zor province, fixed at 15,000 Syrian pounds for Caesarean operations and 10,500 Syrian pounds for normal operations, with the child to be kept in hospital for 12 hours after birth. These regulations were introduced, according to the statement, on account of exploitation and to assist the poor.
In the same month, the Diwan al-Siha in the Mosul area instated regulations on profits pharmacies could make in selling goods, in light of increases in prices for drugs to treat chronic illnesses. The following month, controls on profits of pharmacies in Deir az-Zor province were imposed so as not to exceed 20%. Quality and central control also seems to be an issue as IS has sought to require pharmacies to obtain licenses to operate, stipulating further that medicines must not be exposed to sunlight and the requirement of a fridge to store certain medicines.
As with the issue of medical personnel, part of the problem here appears to be IS’ own making. In May 2015, a ban was imposed on importing medical goods of Iranian origin on the grounds that they could not be trusted. Leaving aside the self-evident reasoning entailed by IS’ anti-Shi’ism and opposition to Iran, there seems to be a broader ideological end-goal of self-sufficiency: thus, in October 2014, IS’ General Supervisory Committee announced the opening of a factory to make synthetic body parts in Ninawa and thus no one should be sent to Turkey to have such treatment.
Most recently, I have received from my Syrian contact who does business in Mosul and Anbar a document from the Diwan al-Siha in Anbar this month that sheds further light the problems of both personnel and medical supply shortages. The Diwan al-Siha in Anbar threatens confiscation of property, clinics, supplies and pharmacies of those outside IS territory and not going to Ramadi hospital to register their undertaking regular hours. Further, it prohibits dealings with and obtaining goods from pharmacies owned by people outside the lands of IS. Below is the document and its translation in full.
Specimen B 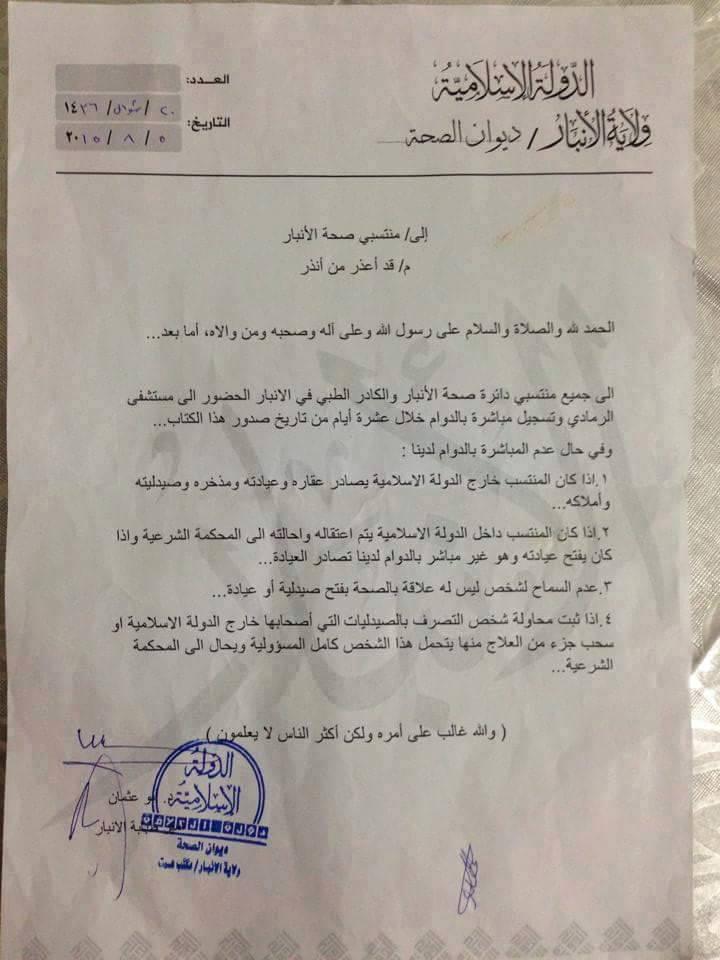 To: Those affiliated with the Diwan al-Siha
Subject: The one who has warned has been excused [i.e. you have been warned, so face the consequences if you ignore this].
Praise be to God and prayers and peace be upon the Messenger of God, his family and whoso is close to him. As for what follows:
All those affiliated with the Anbar health administration and medical staff in Anbar must go to the Ramadi hospital and register their undertaking of regular office hours within 10 days from the date of the issuing of this document.
And in the event of not undertaking regular office hours with us:
1. If the affiliated person is outside the Islamic State, his real estate, clinic, drug store, pharmacy and property will be confiscated.
2. If the affiliated person is inside the Islamic State, he will arrested and referred to the Shari’a court. If he opens his clinic and is not undertaking regular office hours, the clinic will be confiscated.
3. It is not allowed for a person not linked to the health authority to open a pharmacy or clinic.
4. If a person is shown to have been trying to deal with pharmacies whose owners are outside the Islamic State or take some medications from them, this person will be held wholly responsible and be referred to the Shari’a court.
And God is predominant over His affair but most people don’t know it.
Islamic State
Diwan al-Siha
Wilayat al-Anbar: Hit [?] office
Dr. Abu Othman
Head of Anbar Health”
In short, the Diwan al-Siha cannot be regarded as a substantial improvement in comparison with what existed before, particularly healthcare under the Iraqi government. As is the case of public services, going beyond the official media releases and delving into IS documents should provide a more nuanced understanding of the situation. For now, IS’ own regulations, ideology and image have contributed to impediments to treatment of patients and a substantial reduction in the medical professional class that cannot be compensated for by influx of foreigners. The situation may well worsen if the international coalition succeeds in cutting off completely IS’ access to the Syrian border with Turkey.