NOTE: ‘The Clairvoyant” will be a new sub-blog of Jihadology.net. It will be written by me the founder of this website for quick hit blog posts or interesting things I come across that might be too short, in the weeds, or random for more mainstream publication.
—
The Return of Foreign Fighters in the Iraq Jihad
By Aaron Y. Zelin 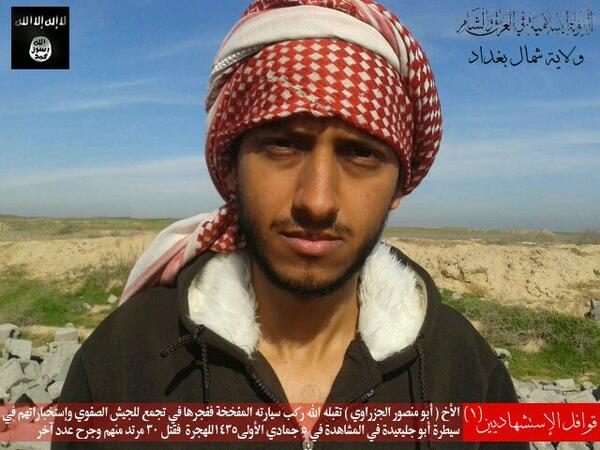 Earlier today, the Islamic State of Iraq and al-Sham’s (ISIS) official Twitter account for the Wilayah of Northern Baghdad released a series of photos of foreigners who had been killed fighting the ‘safawis’ (a derogatory term for Iran/Shi’a) and the ‘dajal’ (the false messiah in Islamic end times prophecies). While much attention has been given to foreign fighters in Syria due to the unprecedented mobilization over the past two years or so, once again, Iraq also seems to be attracting foreign fighters. While it is likely that it never truly stopped, following the sahwa and surge, there was a lot less enthusiasm for it since the Islamic State of Iraq (prior name to ISIS) appeared in decline. The American withdrawal along with the outbreak of the Syrian war and more recent prison breaks have helped revive ISIS to once again be a spoiler within the Iraqi context.
Although ISIS in the Iraqi arena has gained more of a local flavor from Iraqi recruits over the years, since its inception when it was originally called Jama’at al-Tawhid wa-l-Jihad (and all of its later name iterations), foreigners have played an important role as previously documented by Evan Kohlmann as well as recovered from the US Military’s Sinjar Record cache in the organization. Prior to the release of this data on killed foreign members of ISIS fighting in Iraq, between April 2013-March 2014 I personally recorded 15 cases. It is possible that there is overlap. Here is the information from my set:

The information that ISIS released today was about 29 of its members killed between September 2013-March 2014 in northern Baghdad. Some of this data has unknown nationalities such as al-Shami, which could denote anyone in the Levant, or al-Muhajir, just meaning the emigrant, among other non-nation descriptive noms de guerre. Here’s the breakdown:

It is likely this trend will continue and more information will be released in the coming months as ISIS expands its fight in Iraq once more. Whether they make the same mistakes as last decade in Iraq or more recently in Syria remains to be seen (though is likely), but for now, due to the infighting in Syria there has been a lot of discussion within jihadi social media that some foreigners have escaped the internecine fighting and decided (besides returning home or going to other fields of jihad like Egypt or Libya) to move their fight to the Iraq war zone.