NOTE: For prior parts in the Hizballah Cavalcade series you can view an archive of it all here.
–
Liwa’a al-Hamad: Harakat al-Nujaba’s Latest Shia Militia in Syria 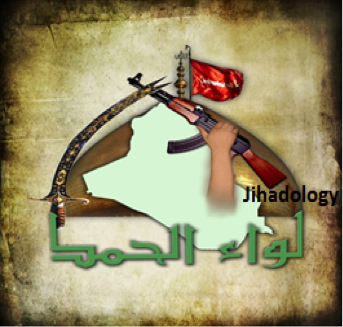 Figure 1: Liwa’a al-Hamad’s official logo. The logo features a map of Iraq with an arm extended and holding a Kalashnikov-type rifle. The dome of the Sayyida Zaynab shrine topped by a red flag reading, “Ya Husayn” (“O Husayn”). The logo resembles the type of logo utilized by Liwa’a al-Hamad parent organizations such as Asa’ib Ahl al-Haq, Kata’ib Hizballah, and Harakat Hizballah al-Nujaba (see Figure 3).

Figure 2: A screen capture of Liwa’a al-Hamad’s flag. The flag is yellow with a printing of the golden dome and blue minaret of the Sayyida Zaynab shrine. The name of the organization is on the left.

Figure 3: The outstretched arm gripping a Kalashnikov pattern rifle, crossed swords (or the extension of letters to appear like swords), and map of Iraq have become hallmarks of many Iranian-backed Iraqi Shia Islamist organizations. 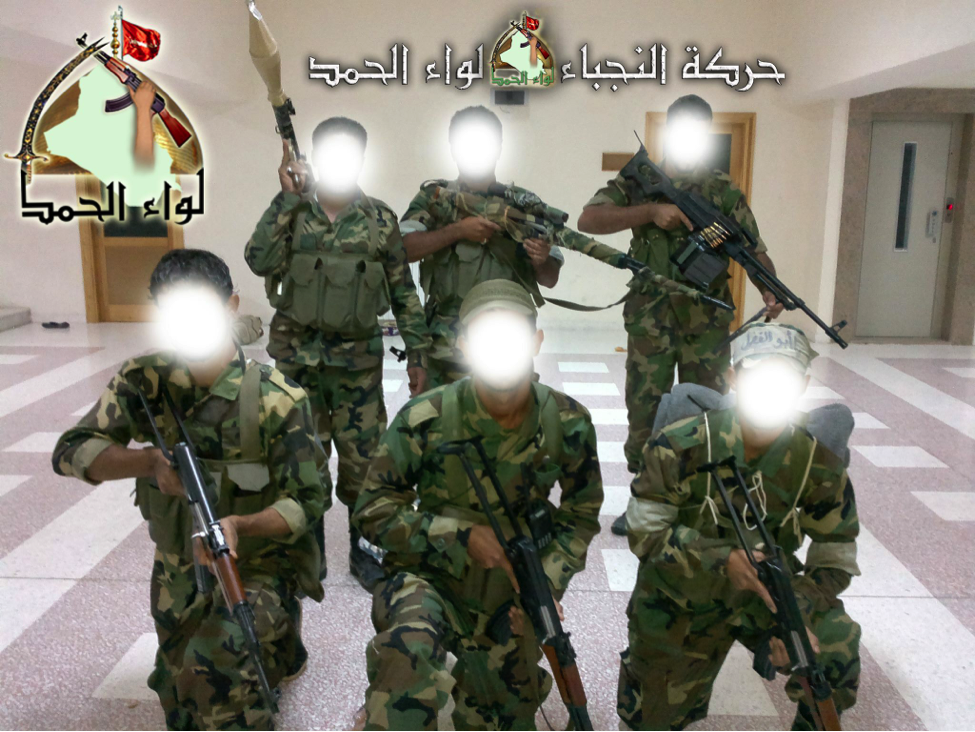 Figure 4: Liwa’a al-Hamad fighters pose for the camera. October, 2013.
Liwa’a al-Hamad’s Shadowy Origins
Harakat Hizballah al-Nujaba (The Movement for the Party of God the Outstanding. A.K.A. Harakat al-Nujaba), a front group created by Kata’ib Hizballah and Asa’ib Ahl al-Haq to route fighters to Syria, has created another Syria-based militia. In August, Harakat al-Nujaba threatened U.S. interests if Syria was attacked by U.S. forces and has been a leading Iranian proxy front-organization used in the war against Syria’s rebels.[1] The front’s newest Syria-based organization goes by the name of Liwa’a al-Hamad (The Praise Brigade). Nevertheless, little information about Liwa’a al-Hamad has been available via open source material.
This is not the first front militia created by Harakat al-Nujaba for activities in Syria. In fact, their main fighting organization in Syria is named Liwa’a ‘Ammar Ibn Yasir.[2] This group is quite active and is currently operating in Aleppo and Damascus in cooperation with Lebanese Hizballah and Liwa’a Zulfiqar. Additionally, Harakat al-Nujaba has also created Liwa’a al-Imam al-Hasan al-Mujtaba, a group which has been active in Rif Dimashq, particularly the East Ghouta area.  Nonetheless, unlike its sister groups, Liwa’a al-Hamad is just starting to be given a more public profile. Relatively little has been released about the organization, its fighters, leadership, and/or areas of operation in Syria. Thus far, Liwa’a al-Hamad has not created its own accessible social media pages (particularly on Facebook or YouTube). Its broader exposure to the public only came in late November via official pages run by Harakat al-Nujaba’s Liwa’a ‘Ammar Ibn Yasir.
Liwa’a al-Hamad’s existence was first announced in a caption on a YouTube video from July, 2013. The video showed a funeral procession for dead members of Liwa’a ‘Ammar Ibn Yasir. However, no photos of its fighters or operations were posted online, nor were any Liwa’a al-Hamad members or symbols shown in the July video. The group was very rarely mentioned on other Shia Islamist militia social media pages. Only at the end of October were specialized images for the group posted on well-hidden social media sites. Interestingly, (at the time of this writing) none of these photographs were re-released on the interconnected web of Shia militia Facebook pages. 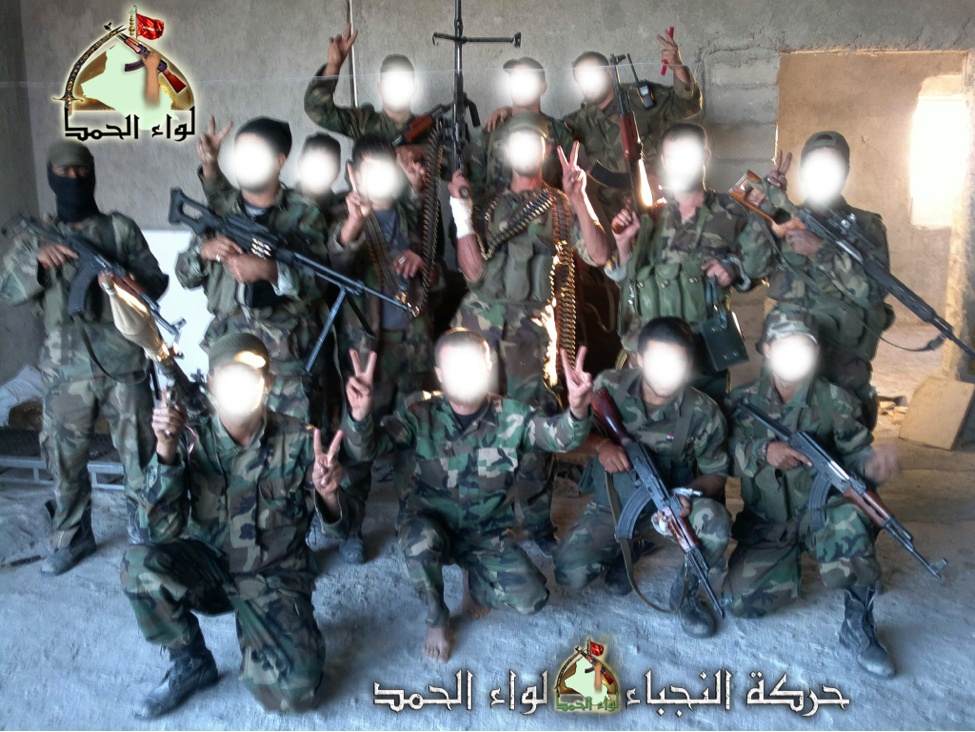 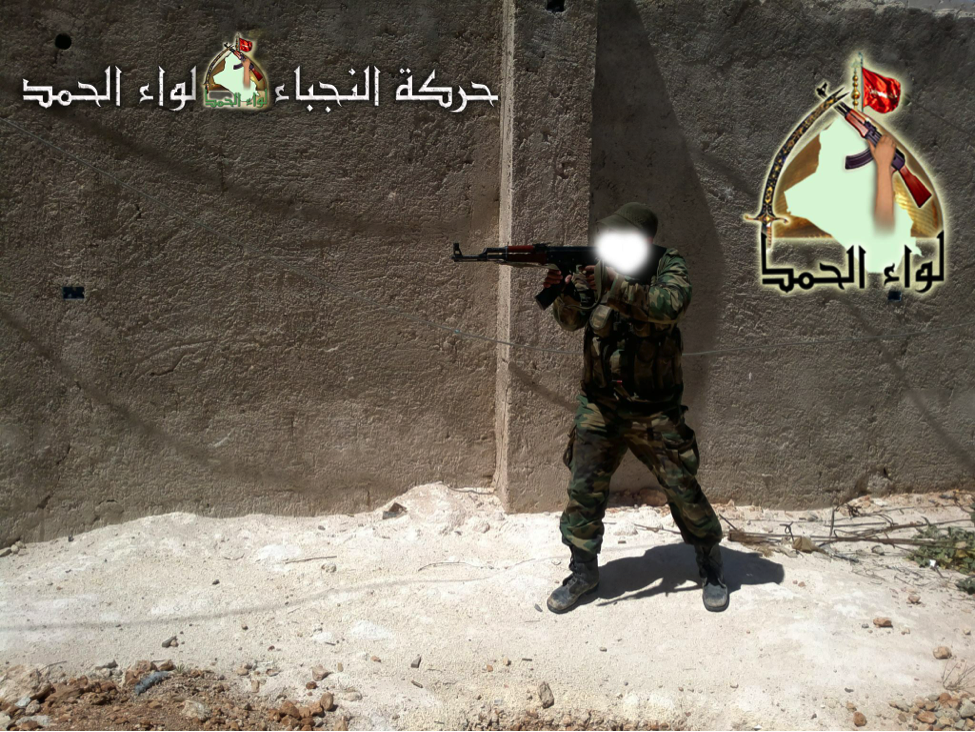 Figure 6: A Liwa’a al-Hamad combatant takes aim.
The Martyrs of Liwa’a al-Hamad
Ali Husayn was first announced as having been killed on the official Facebook page for Liwa’a ‘Ammar Ibn Yasir. This marked the first occasion where a fallen member of the organization was openly announced on an established Shia militia social media page. His death was reported on December 5, 2013 with one photo showing him clutching a machine gun. This has been the only photo from Liwa’a al-Hamad to have made its rounds on more established and prominent Shia militia pages. Interestingly, no patches or other forms of identification can be seen on his uniform. While many Shia Islamist fighters in Syria don patches featuring slogans such as “Labayk ya Zaynab” (“We are here for you, O Zaynab”), Husayn and other Liwa’a al-Hamad fighters often lack these accoutrements. Though, there were other fighters who were quietly announced on hidden social media applications as having been members of Liwa’a al-Hamad.
___
Name: Haji Abbas
Death Announced: December 7, 2013
Notes: Only one photograph could be found for Abbas. He was also claimed as a member of Liwa’a ‘Ammar Ibn Yasir. 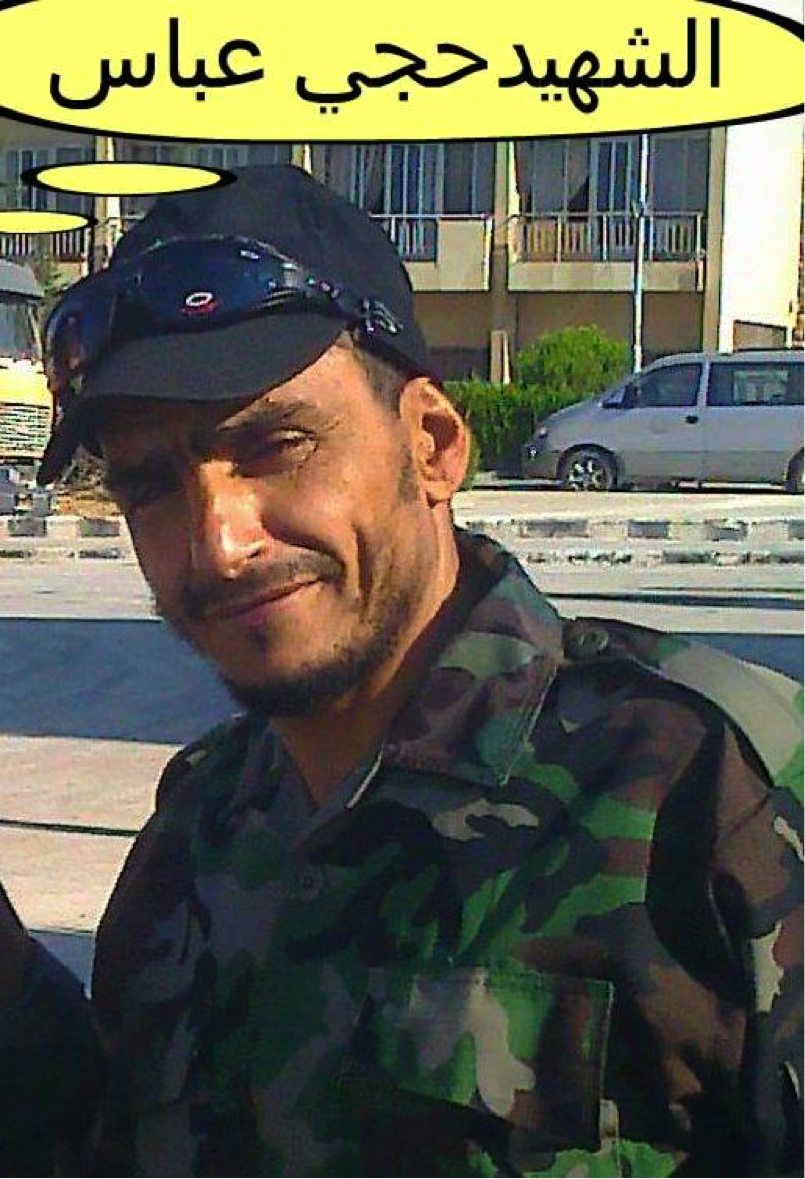 Name: Ali Husayn
Death Announced: December 5, 2013
Notes: Husayn had the most developed profile for a fallen fighter. While no details were released on his place of death, rank within the organization, or origins (though, his funeral was held in Iraq), he had multiple martyrdom photos made to commemorate him and a number of combat photos. 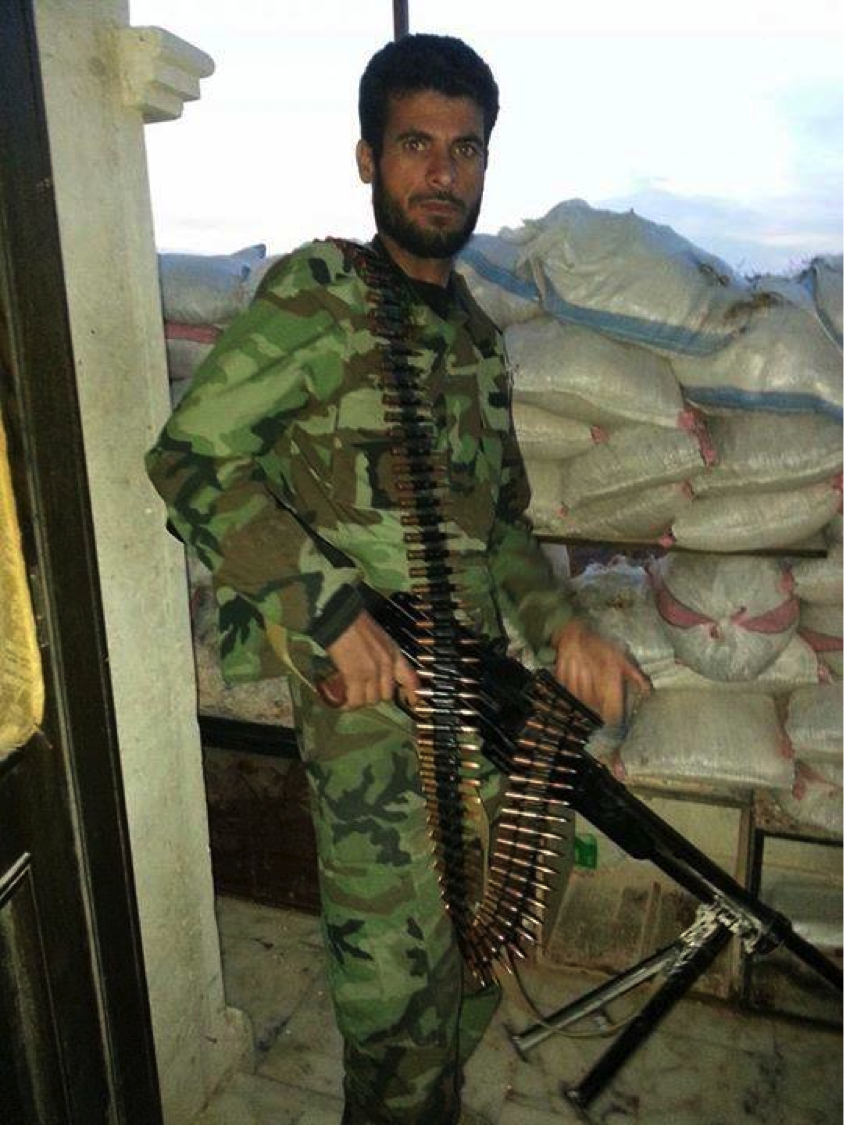 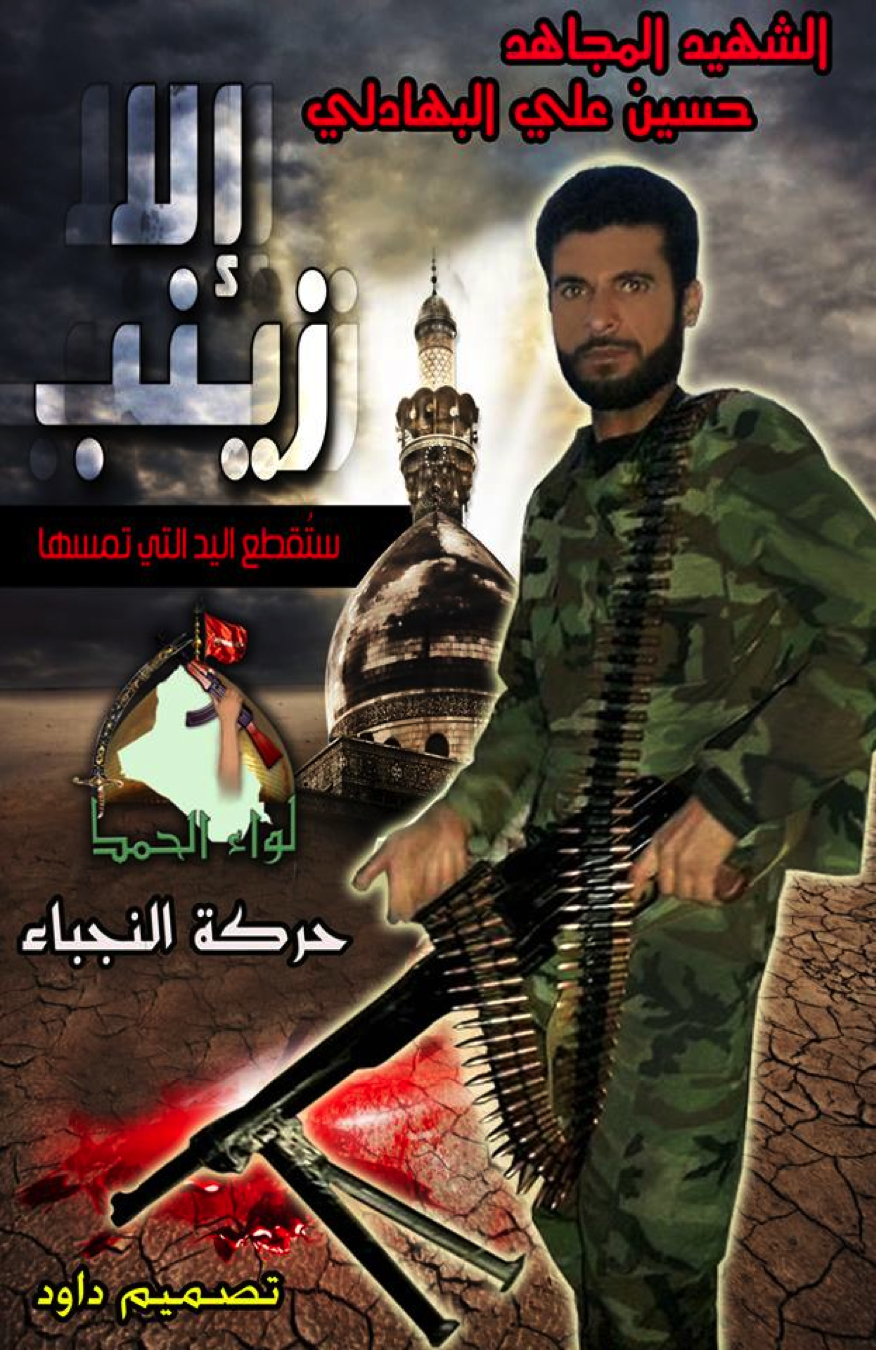 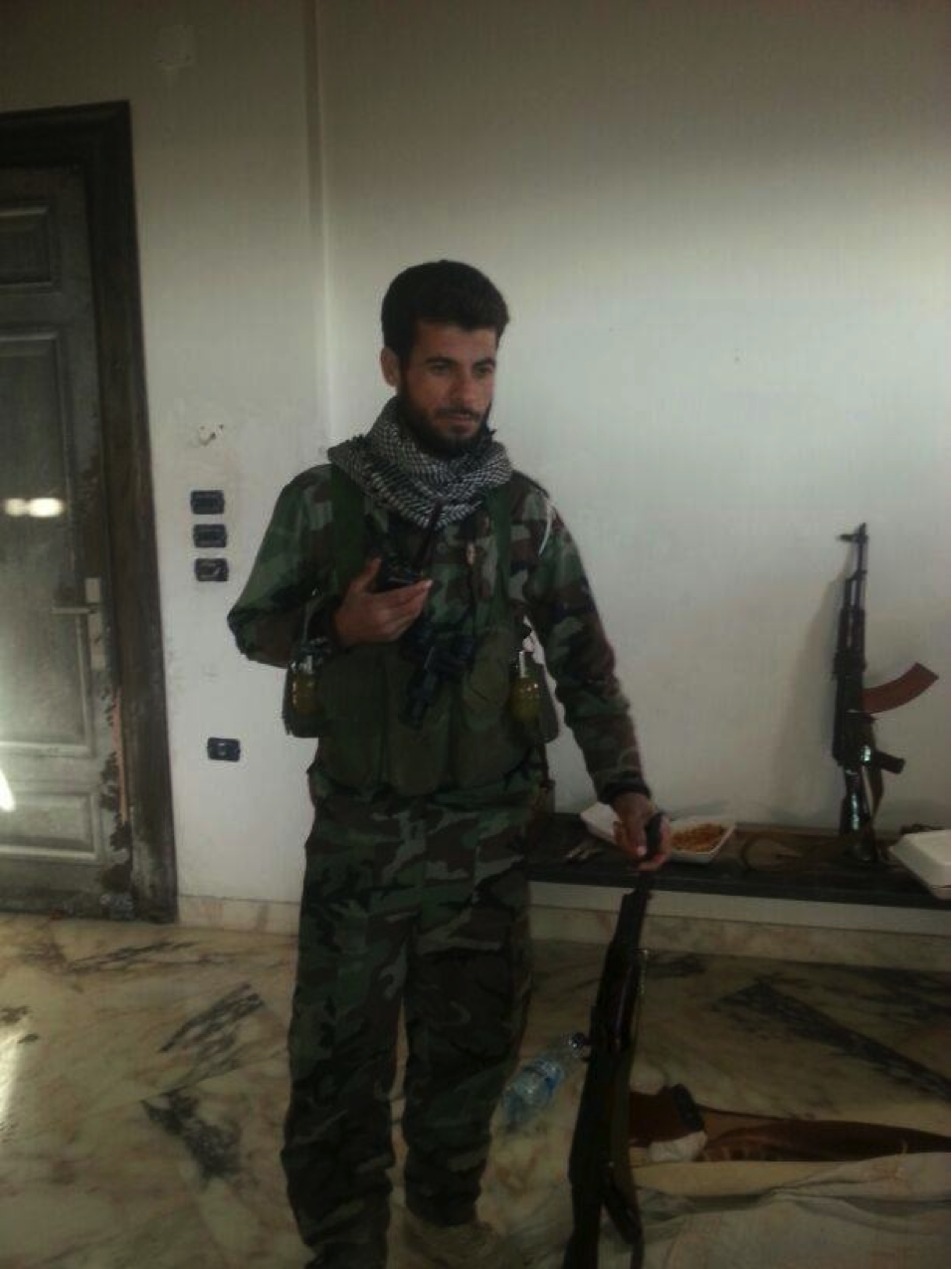 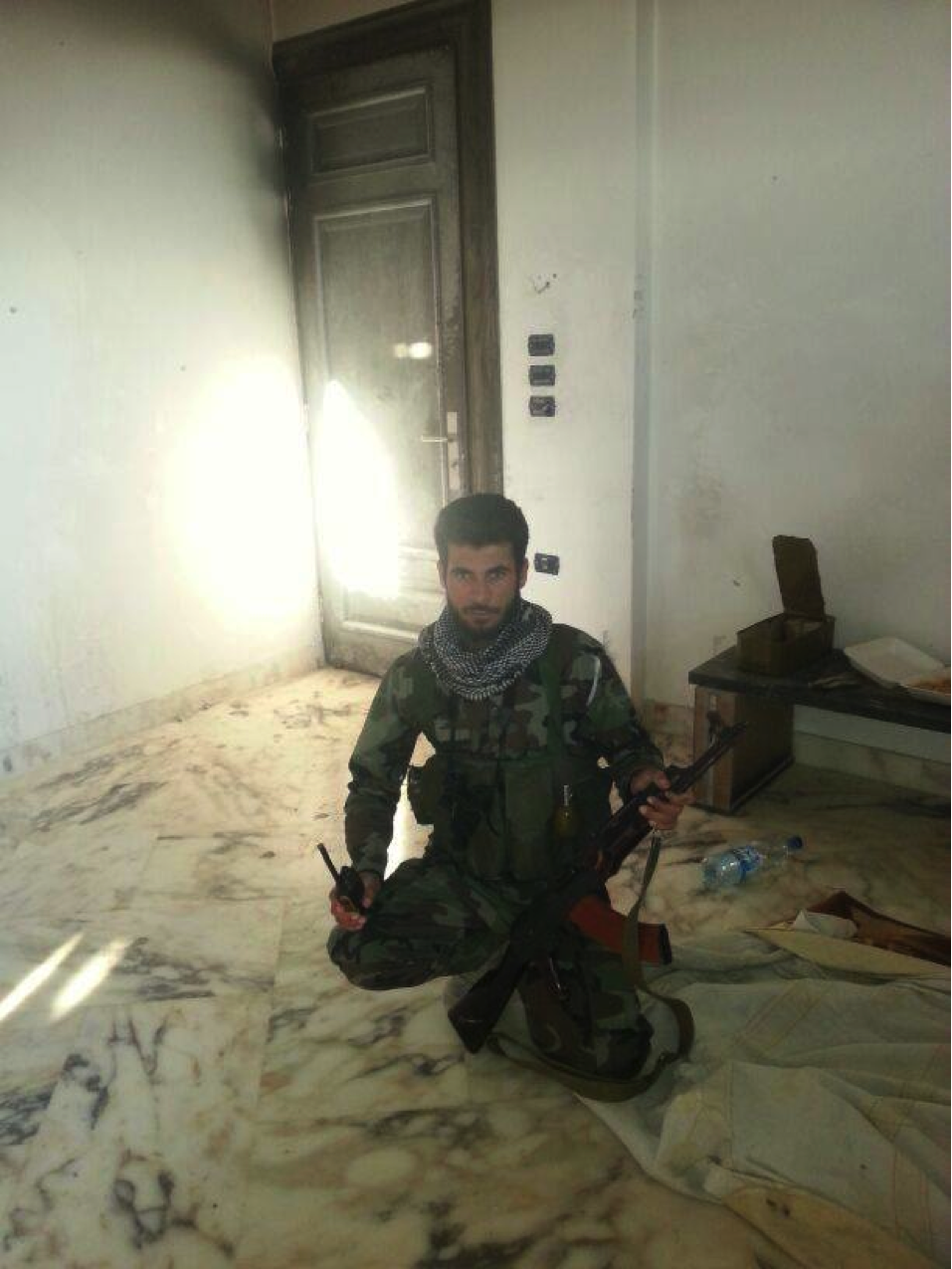 Name: ‘Ali Jiyad
Death Announced: November 30, 2013
Notes: No details were available on where he was killed. His posters match the design used by Liwa’a al-Imam al-Hasan al-Mujtaba and Liwa’a ‘Ammar Ibn Yasir. 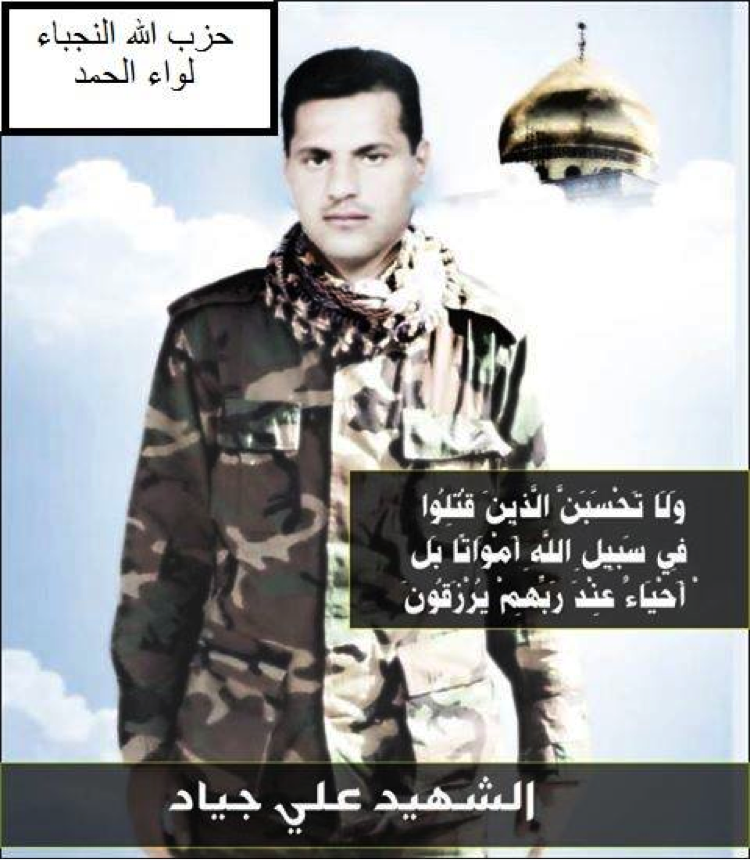 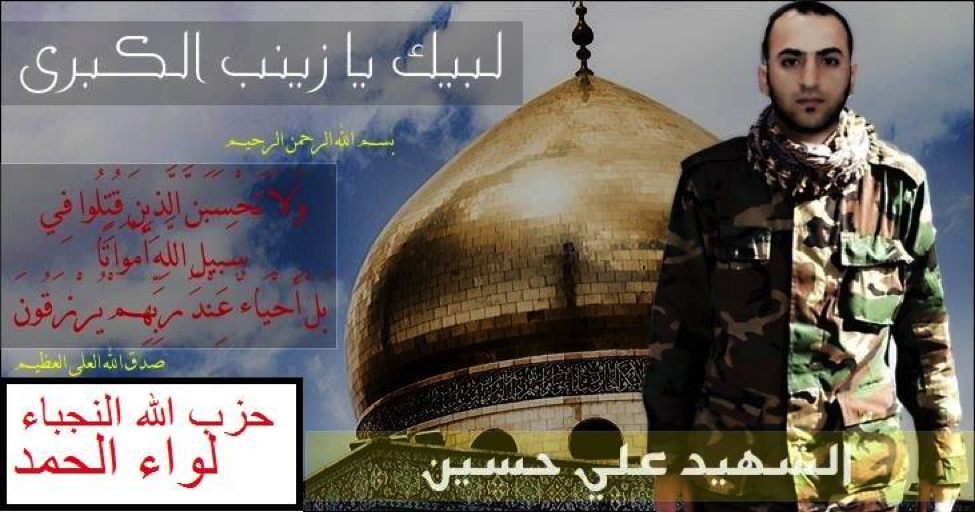 Videos
*** WARNING: GRAPHIC MATERIAL ***
Footage of the group has been hard to find. However, Liwa’a ‘Ammar Ibn Yasir uploaded a short video showing Liwa’a al-Hamad’s members at the funeral for one of their fallen members, Haji ‘Abbas. So far, this has been the only video that has been posted openly as footage showing Liwa’a al-Hamad.
Still, another video was released in mid-October showing “the soldiers of Allah” (a commonly used euphemism for Shia militiamen by their supporters) touring a site strewn with dead bodies. The recording’s own editing suggests the fighters were associated with Asa’ib Ahl al Haq, one of Liwa’a al-Hamad’s parent organizations. The film is particularly brutal and graphic in content. It features Shia Islamist fighters stepping on mangled bodies and numerous bloody corpses. 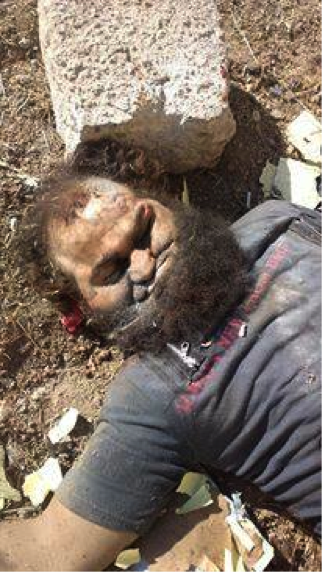 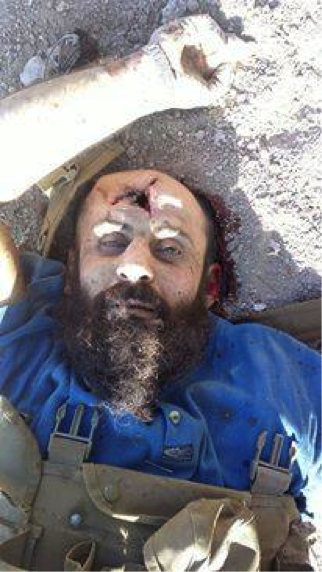 Figure 8: This dead rebel fighter (left)  was featured in the film. This photograph was posted on a social media site affiliated with Liwa’a al-Hamad (see the film at 2:07). These photos were not found elsewhere on other social media or forum sites.
[1] See: “Iraqi militia vows to attack U.S. interests if Syria hit”, Reuters, August 30, 2013, https://www.reuters.com/article/2013/08/30/us-syria-crisis-iraq-idUSBRE97T0XH20130830.
[2] The Hizballah Cavalcade report on the militia also included the first analysis done on its Harakat Hizballah al-Nujaba parent group.