NOTE: An archive of the Musings of an Iraqi Brasenostril on Jihad column can  be found here.
—
The Islamic State of Iraq and ash-Sham Billboards in Raqqa
By Aymenn Jawad Al-Tamimi
Of all the areas in Syria where the Islamic State of Iraq and ash-Sham [ISIS] has an established presence, the city of Raqqa arguably stands out for the nature of ISIS’ da’wah efforts, most notably in the form of billboards. What follows is a collection of those billboards and translation of their messages.
First, however, an update is needed on the ISIS situation in Raqqa. In previous posts on the subject in June I identified how the names and banners of ISIS and Jabhat al-Nusra (JN) were interchangeable. By the beginning of July, however, this was no longer the case as the ISIS commander in Raqqa- a local man by the name of Abu Sa’ad al-Haḍrami- defected from ISIS and decided to reaffirm a separate JN identity.
Haḍrami felt disillusioned with ISIS’ conduct in the city particularly as regards to detaining rival rebels, and believed that continuing the name of ISIS was counterproductive since it is in contravention of Sheikh Aymenn al-Ẓawahiri’s order to keep the Islamic State of Iraq and JN separate according to the realms of Iraq and Syria respectively while insisting that the two groups cooperate.
Haḍrami then went with his followers to the city of Tabqa, and in mid-September, the ‘return’ of JN to Raqqa was announced in a statement with relevant excerpts translated below:
“To our people in Raqqa, may God protect them, we inform you of our return to the town after we established a military camp according to Shari’a for the retraining of our mujahideen after the deviation in behavior norms and the differences among some of the brothers. We are obliged to you to work to serve Islam and Muslims and to fight the Nusayri regime….and we emphasize that there whosoever exploits the name of Jabhat al-Nusra again to carry out personal desires and interests, we reject that person wholly and individually.
And by God we disavow the acts of kidnapping, thefts and assassinations done in the name of anything deemed in the interest of that and a fulfillment for those pretexts, and so we have announced the following:
– No sending out of any patrol after 10 p.m. regardless of the circumstances and the seriousness of the reasons.
– We do not acknowledge any mujahid (masked, disguised or incognito).
[…]
– Any car not carrying the placards and banners of Jabhat al-Nusra is not affiliated with us and we are not linked to it.
– Anyone who takes upon himself to identify with the committee of our mujahideen or to speak in the name of Jabhat al-Nusra or to raise the banner of Jabhat al-Nusra on his car will be liable to the greatest punitive measures regardless of the reasons which called him to do that.” 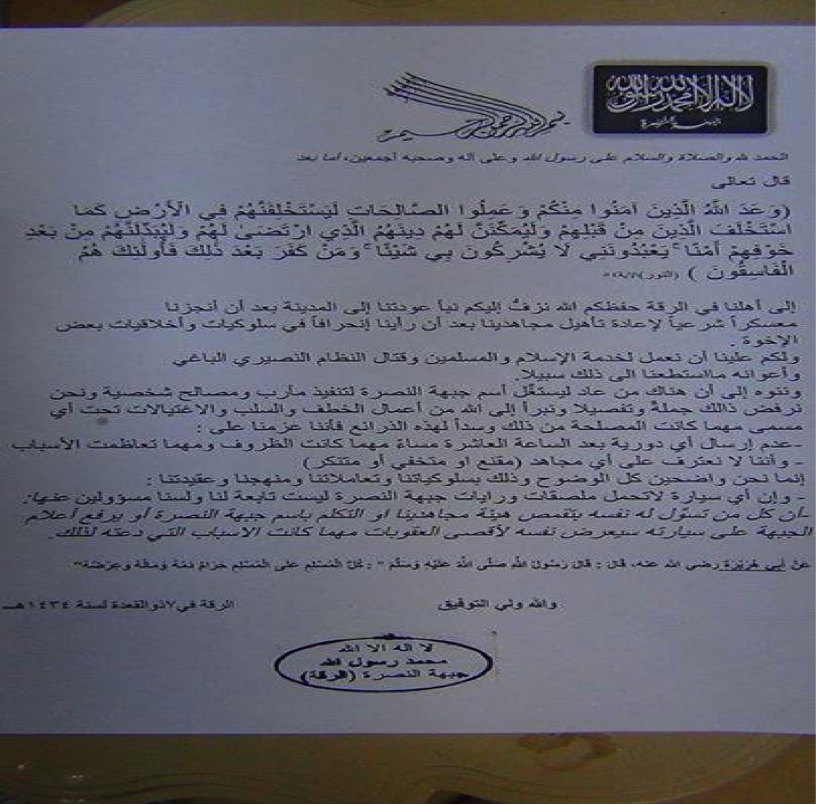 Figure 1: Jabhat al-Nusra local statement announcing a return to the city of Raqqa, first seen on 13 September.
As can be seen, this statement, in referencing the supposed ‘exploitation’ of JN’s name to describe implicit criticisms of ISIS’ conduct in Raqqa, corroborates my earlier analysis of JN and ISIS as interchangeable in Raqqa in May and June. The imprisonment of rivals as provoked small-scale protests in June whereby demonstrators could be heard denouncing the names of both JN and ISIS. Further, in initially pledging ba’yah to Sheikh Abu Bakr al-Baghdadi, it does not follow that Abu Sa’ad al-Haḍrami was hostile to the name of JN or Sheikh Jowlani, and in rallies from the period JN and ISIS flags could be observed side by side.
Since JN’s return to Raqqa, Abu Sa’ad al-Haḍrami has reportedly gone missing. One claim is that ISIS is holding him hostage, and some activist networks in Raqqa have recently circulated a purported JN statement criticizing ISIS for the continued detention of a number of people, including Abu Sa’ad al-Haḍrami. However, the statement bears no JN seal or signature, and appears to be a forgery that is trying to exaggerate the level of fitna between JN and ISIS in the town.
It is true that a local dispute in the town led to a brief clash in which one member of JN was killed, but since then the JN-ISIS relationship in Raqqa has moved away from tension. This cooperation trend has most notably entailed joint Eid al-Adha celebrations and prayers- a phenomenon that has also been observed in Ghouta, Damascus area. Meanwhile, joint JN-ISIS military fronts (together with other battalions) are operating in Deir az-Zor and Sakhna (Homs governorate). This runs counter to the media narrative that tends to see JN and ISIS as being on staunchly hostile terms with each other. 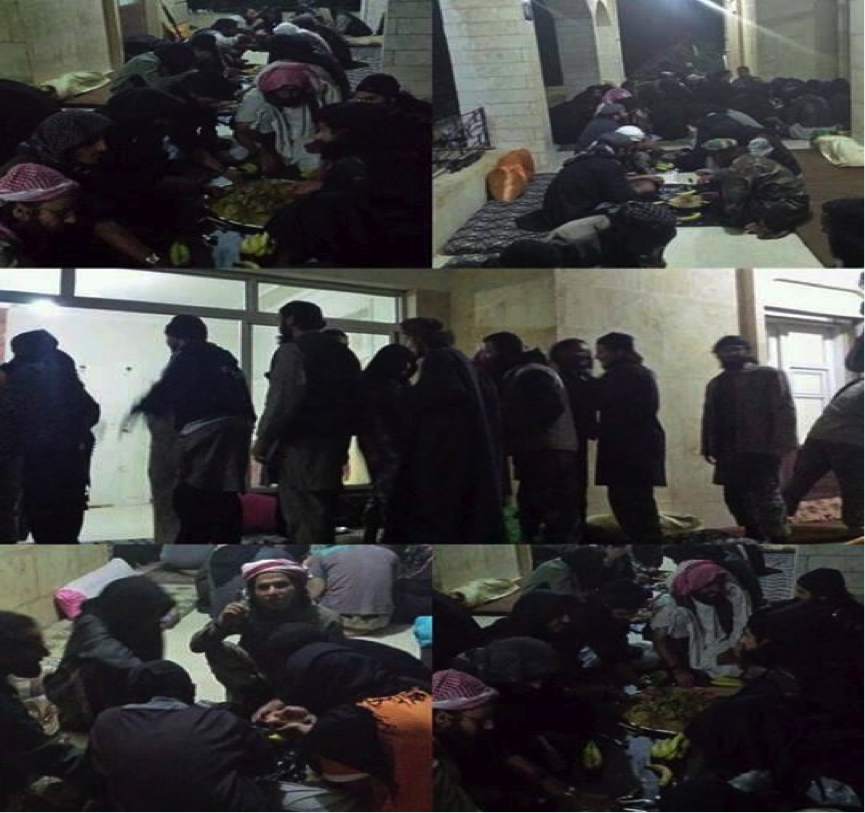 Figure 3: Joint ISIS-JN prayers from Raqqa.
As of now, therefore, the ISIS-JN relationship in Raqqa is one of separate entities but clearly cooperating and trying to bridge the problem of the disagreement between Sheikh Baghdadi and Sheikh Jowlani, even as some JN members undoubtedly harbor reservations over ISIS’ methods of dealing with rivals. In turn, ISIS appears to be more aware of the problem of resentment over its conduct and accordingly issued a statement to residents of Raqqa on their being entitled to submit complaints about members’ conduct. In any event, most FSA-banner remnants in Raqqa have now been absorbed by ISIS or JN, though FSA banners may still be observed alongside those of JN or ISIS at civilian rallies. In short, Raqqa today is under a triumvirate of JN, ISIS and Ahrar ash-Sham. Figure 4: “The Engineering Battalion”- a local JN affiliate in Raqqa. 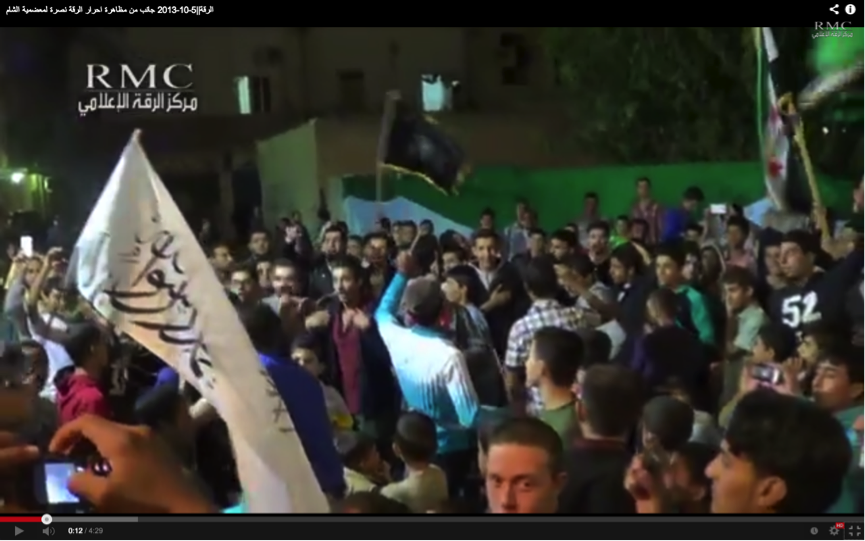 Figure 5: Screenshot from a rally in Raqqa on 5 October featuring an ISIS banner alongside FSA flags. 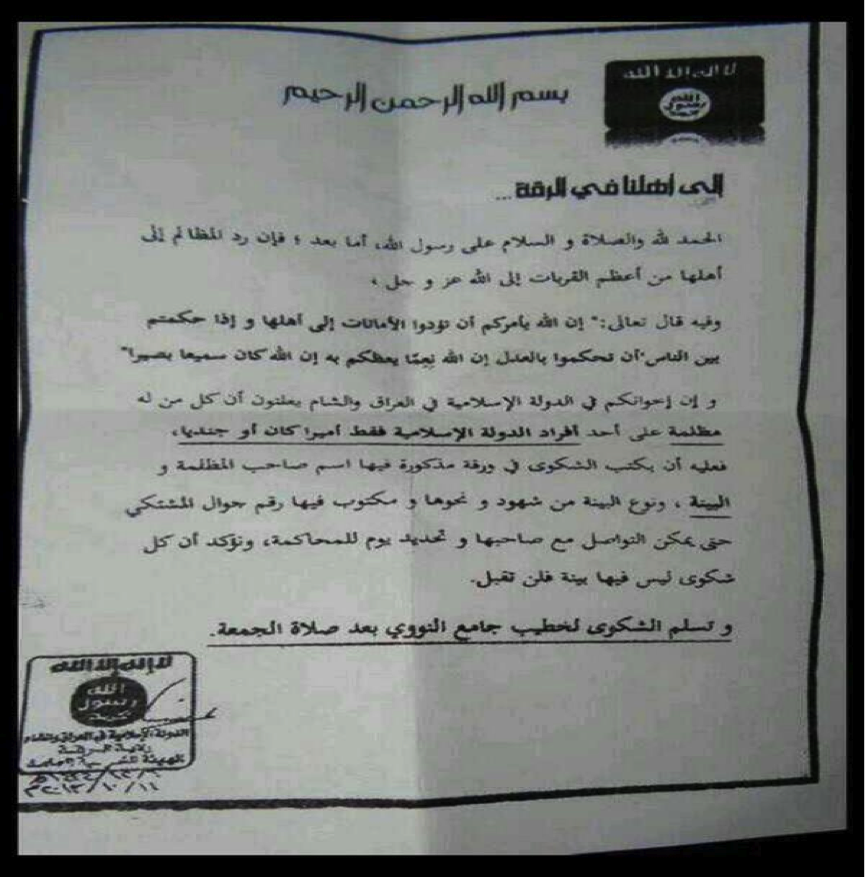 Figure 6: Recent ISIS statement to the people of Raqqa on how to submit complaints about ISIS members’ conduct if necessary.
Without further ado, here is an archive of the billboards put up by ISIS across the city of Raqqa as part of its da’wah efforts. The billboards primarily promote the importance of modest dress for women, the need for Shari’a as the sole source of legislation, and the importance of fighting jihad. They are always signed in the following form: “From your brothers in the da’wah office: Raqqa.” 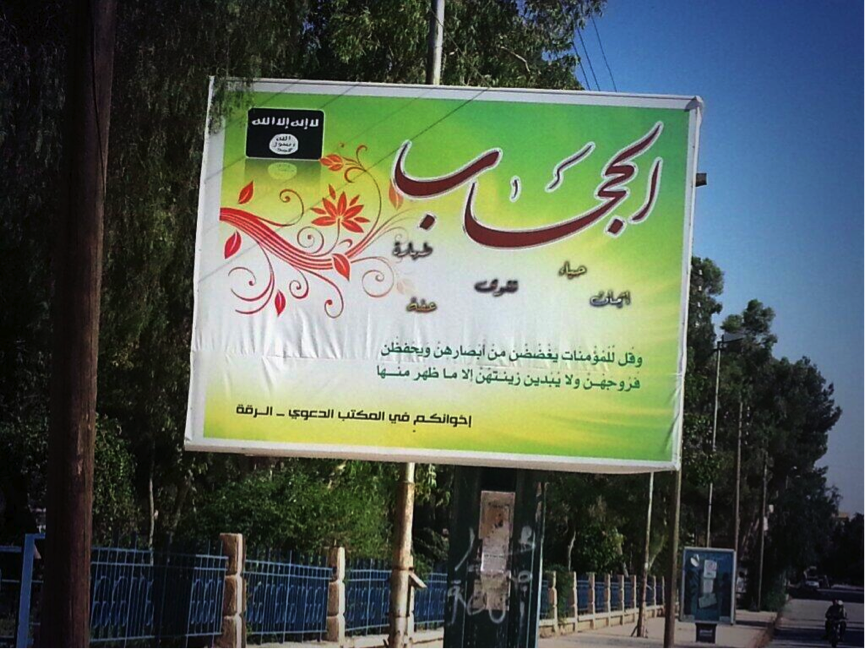 Figure 7: “Speak to the believing women as they lower their eyes, guard their openings and do not show their adornments except what has appeared from them.” 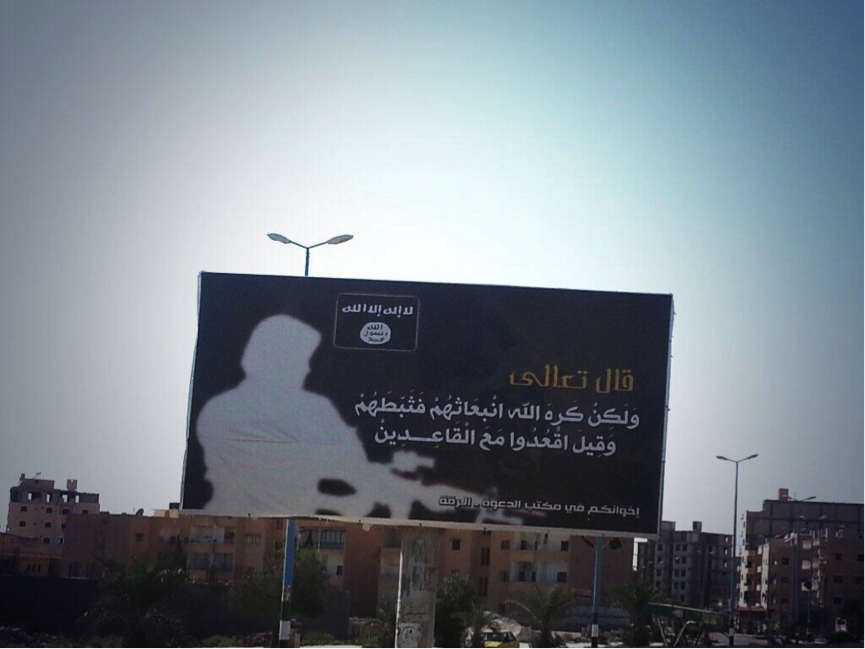 Figure 8: “The Almighty has said: ‘But God hated that they were being sent, so he kept them back, and it was said: Remain with those who are remaining.” (Qur’an 9:46) 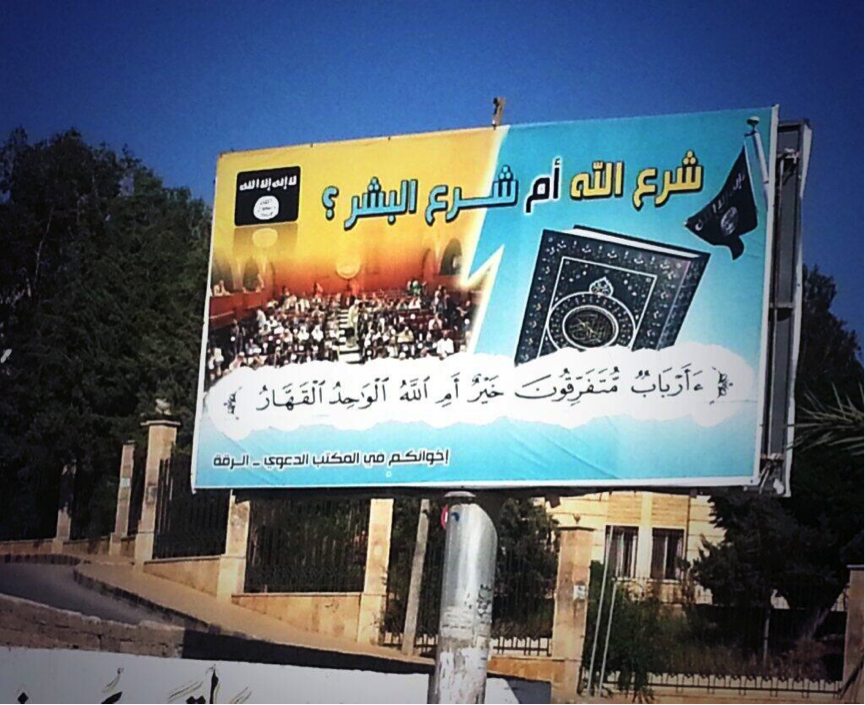 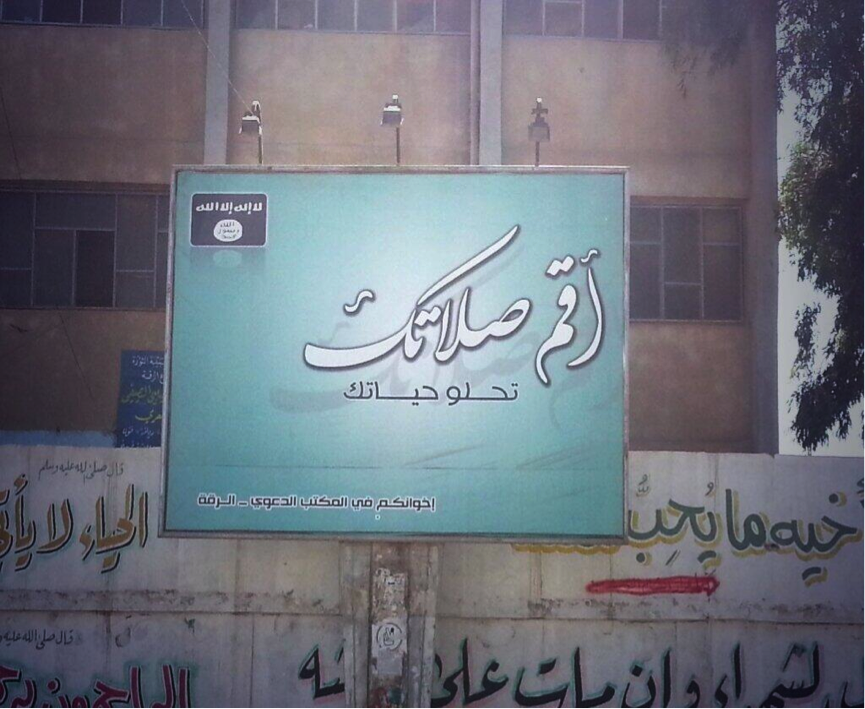 Figure 10: “Perform your prayers; your life is sweet.” 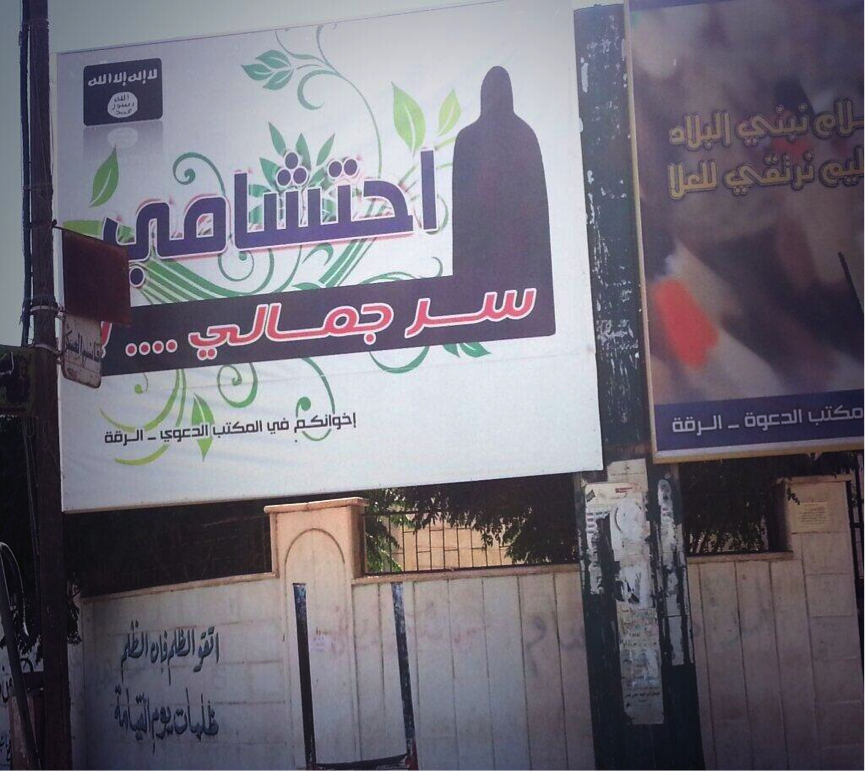 Figure 11: “My modesty is the secret of my beauty”- a billboard promoting the niqab/burqa. 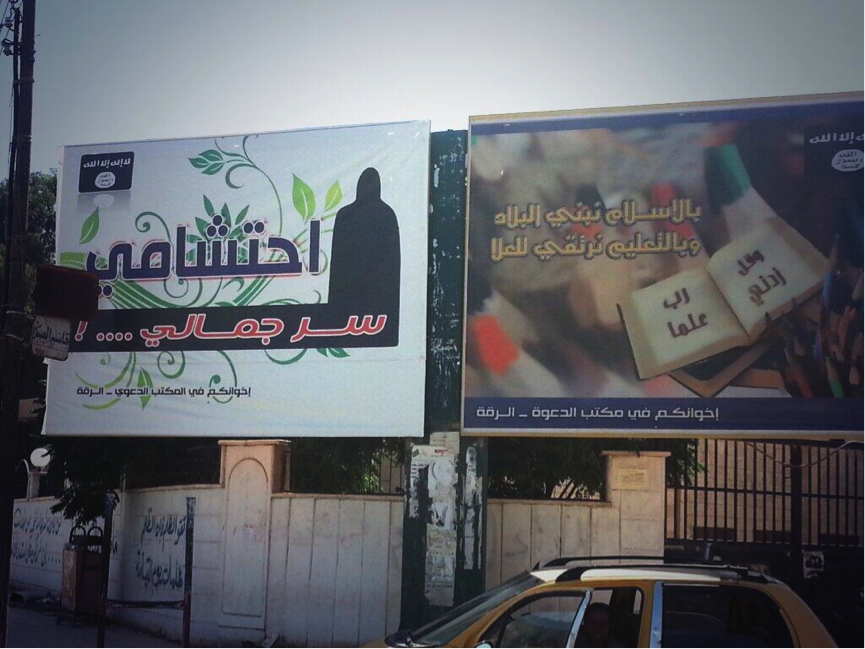 Figure 12: Alongside the billboard promoting the niqab/burqa, we have another ISIS billboard to the right reading “By Islam we build the land, and by education we ascend to Heaven.” 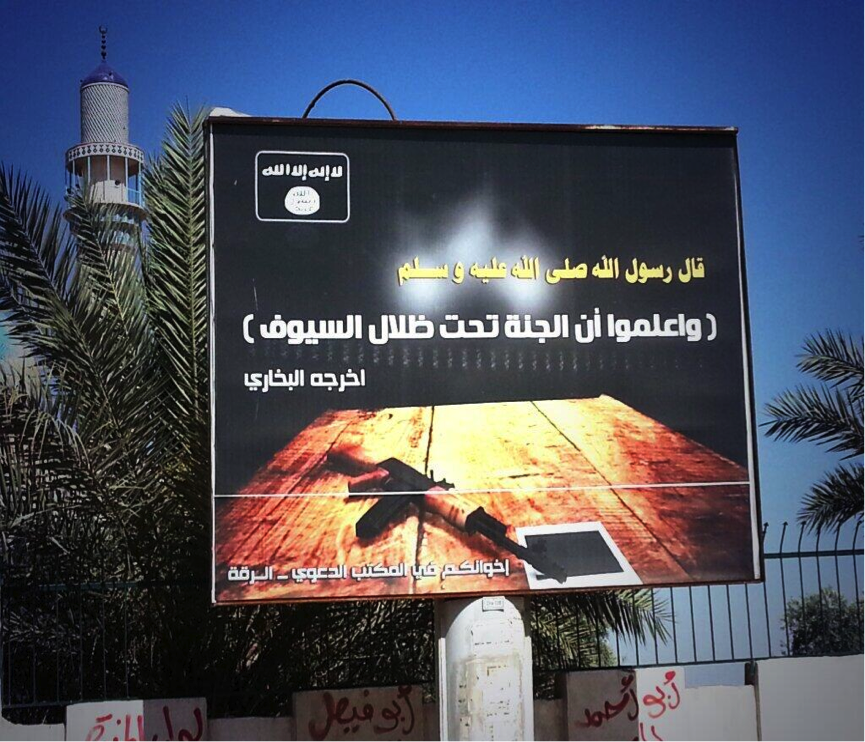 Figure 13: A billboard promoting jihad: “The messenger of God- may God’s peace and blessings be upon him- said: ‘And know that Paradise is under the shade of swords’.” 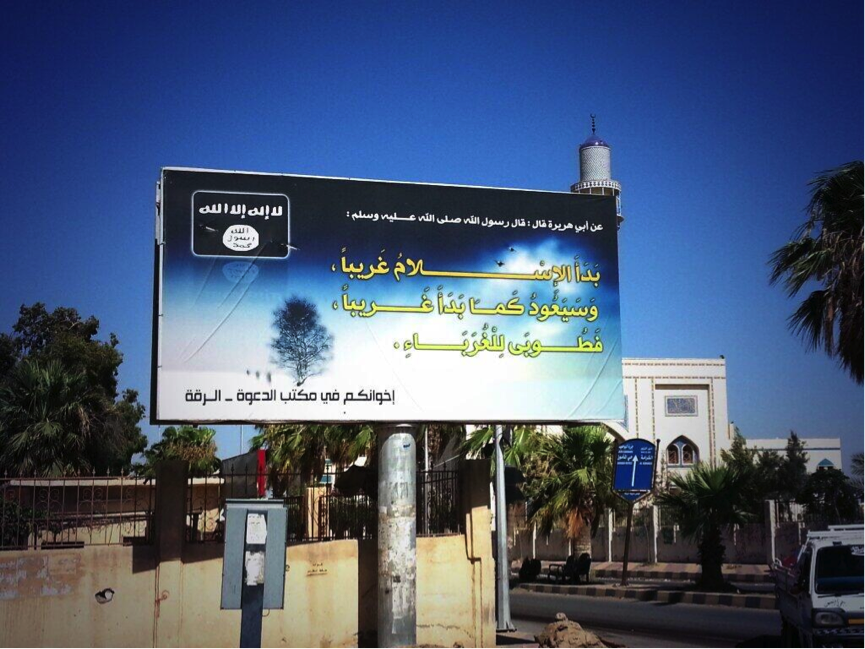 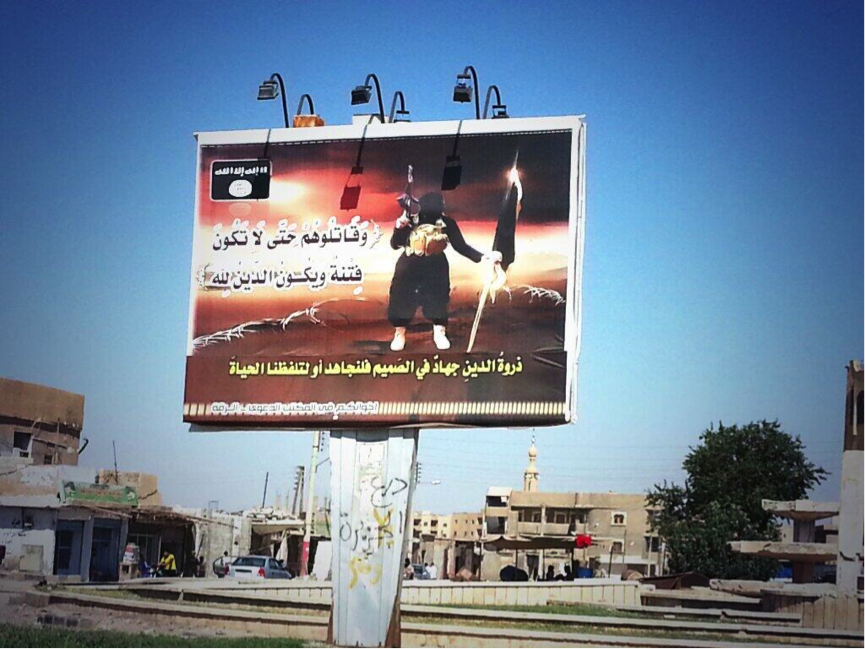 Figure 15: “’And fight them until there is no more fitna and religion is God’s alone’ (Qur’an 8:39). The highest calling of religion is jihad against idolatry, so let us wage jihad or let life throw us out.” 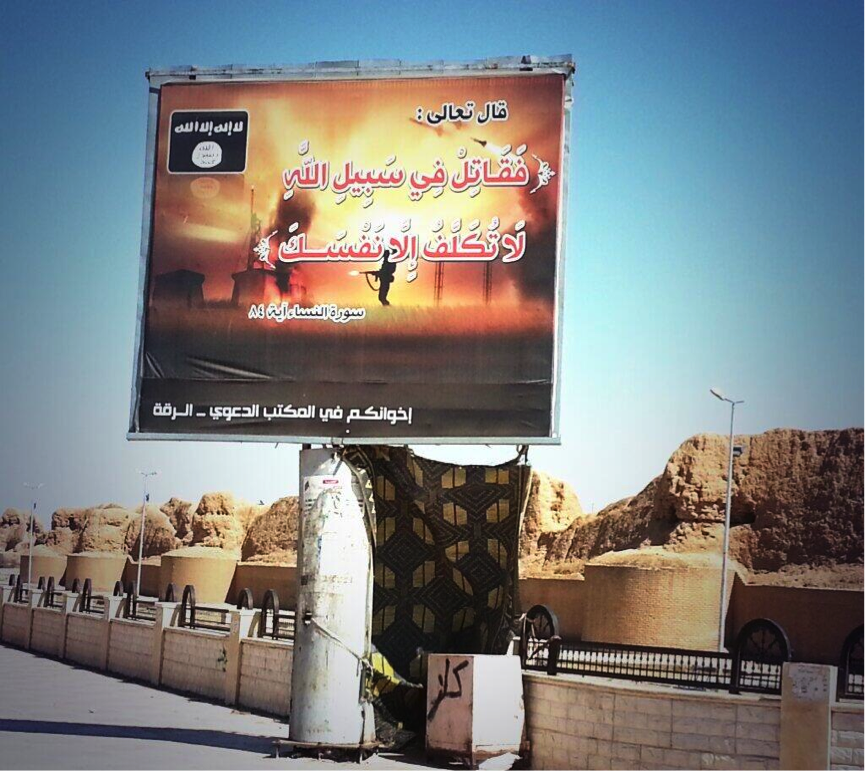 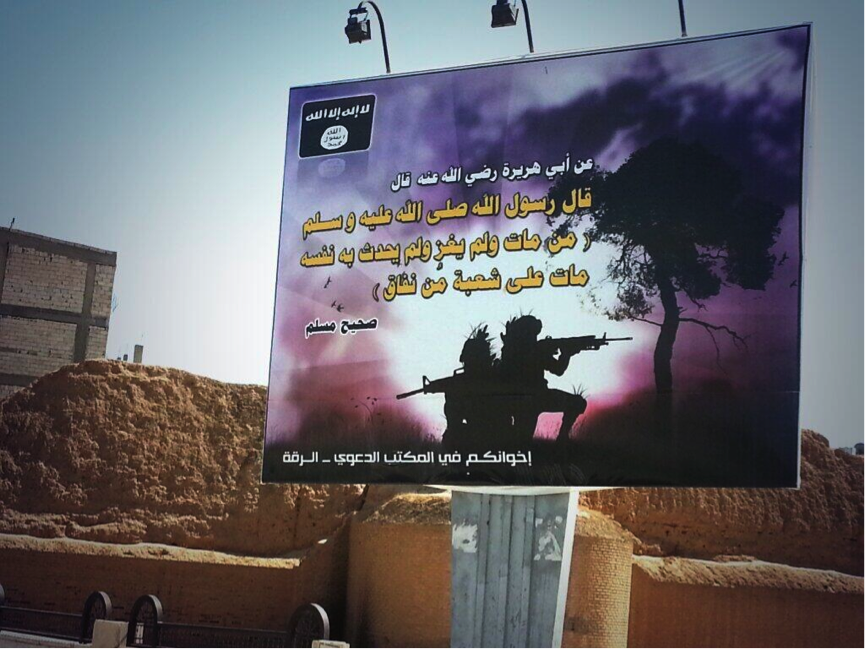 Figure 17: “Narrated on the authority of Abu Huraira, may God be pleased with him. He said: ‘The messenger of God- may God’s peace and blessings be upon him- said: ‘Whoever has died and did not fight [jihad] or think about doing so has died among the people of hypocrisy.’ Sahih Muslim.” 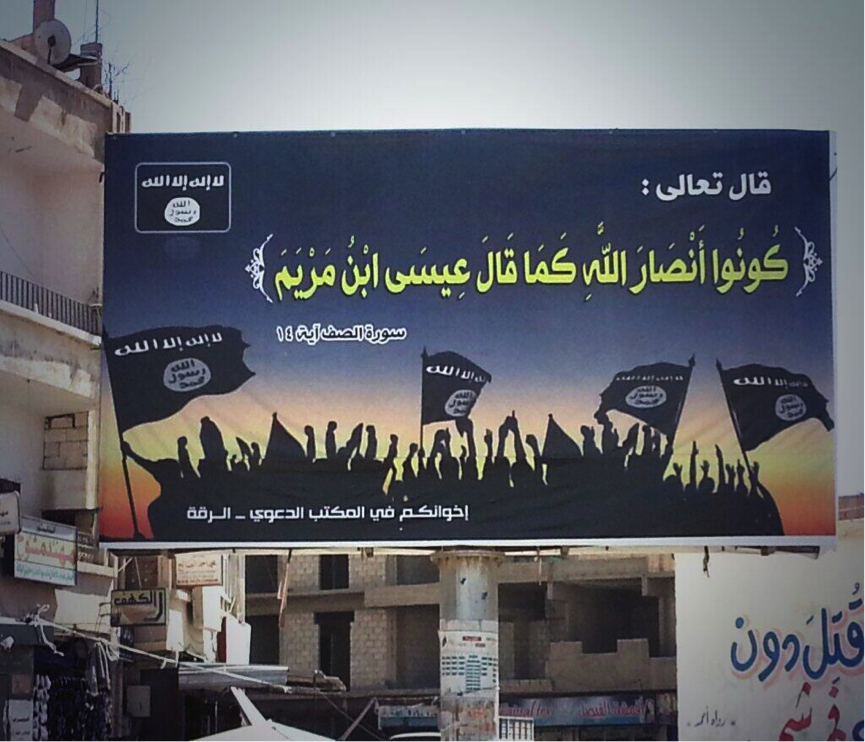 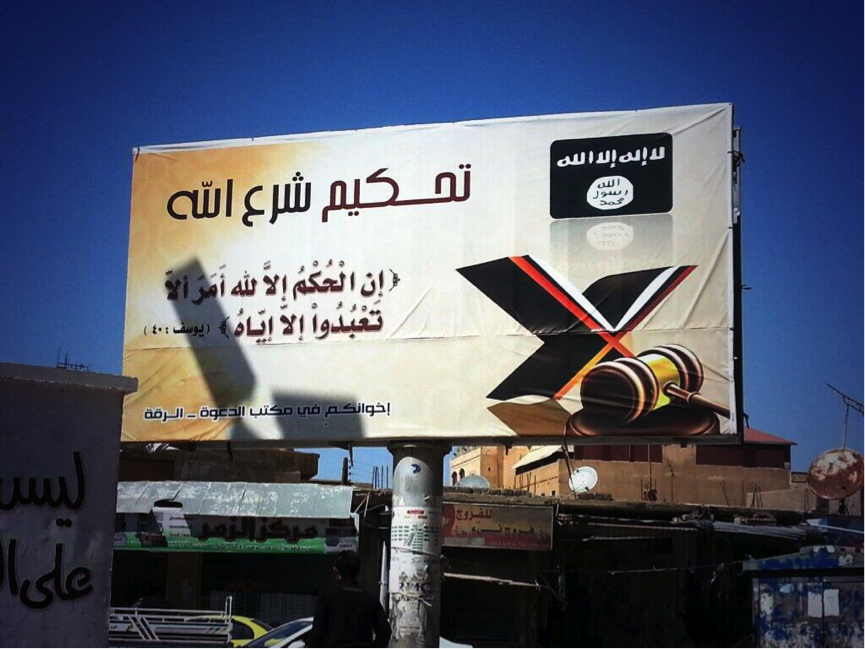 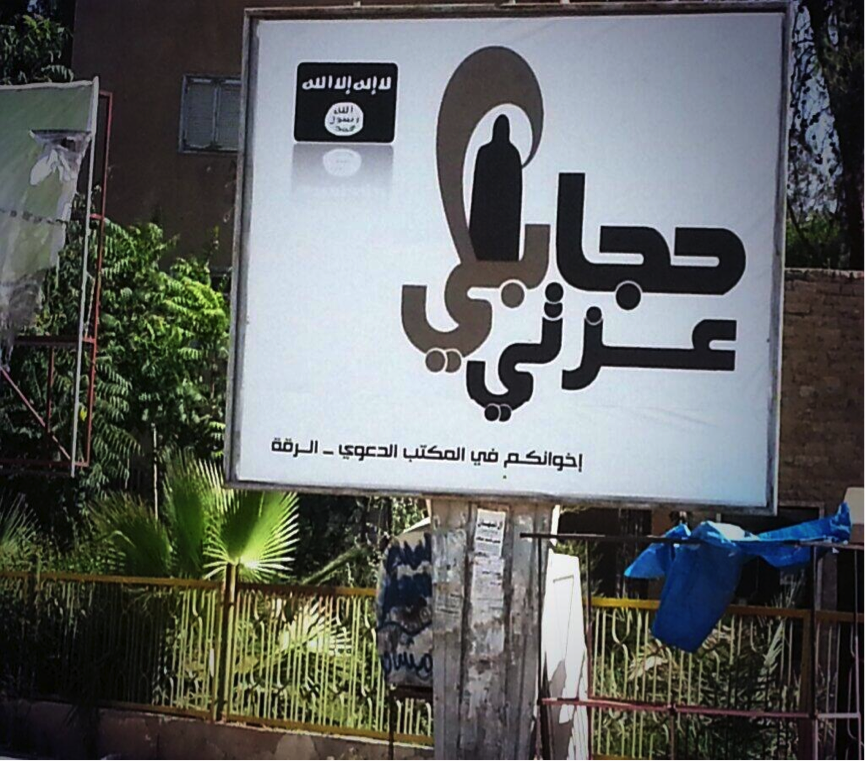 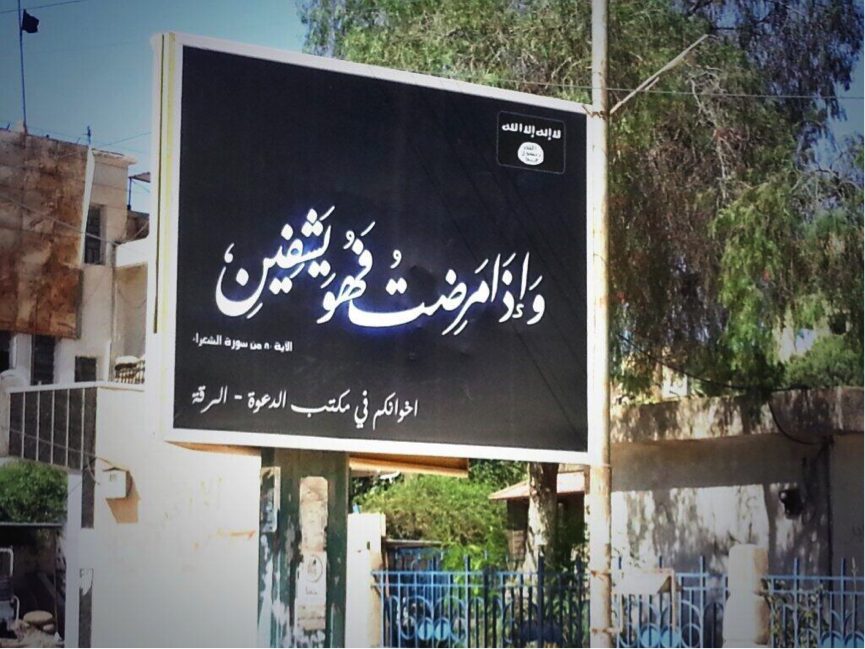 Figure 22: “Together let us spread our Shari’a under the shade of God’s law.” 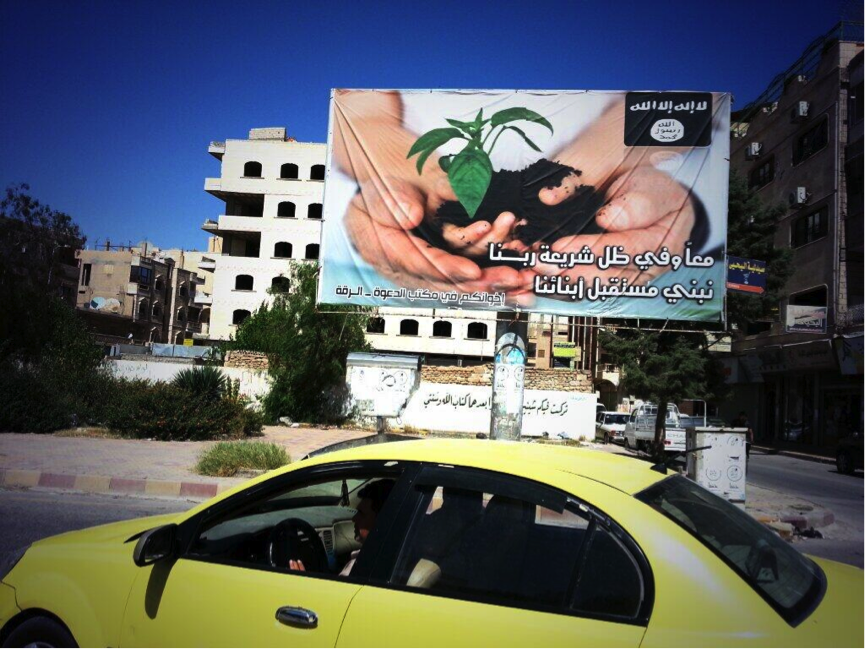 Figure 23: “Together and in the path of our Lord’s Shari’a, we build our sons’ future.” Figure 24: ”Oh son of Adam! You are [merely] days; when your day is gone, a portion of you goes.” This is a well-known Arabic saying emphasizing the value of time from a seventh century Muslim preacher called Hasan al-Baṣri. Figure 25: “Taghut (idolatry)? [Something] that wants to remove a part of your life and put it for something besides God.” Figure 26: “Oh people of Jihad in the land of ash-Sham: unite your rans under the banner: ‘There is no deity but God.’ And cling to God’s rope together and do not separate. For exalted is He who hath said: ‘Verily God loveth those who fight in His path in a row as though they are one structure joined firmly” (Qur’an 61:4- a verse commonly cited by mujahideen groups). Figure 27: “The constitution of a secular state is incompatible with the law of God,” followed by a quotation of Qur’an 3:83. Figure 28: Identical caption to figure 25 but note the ash-Sham channel media logo. This billboard was put up in May as ash-Sham channel, which is based in Raqqa but has been inactive in putting out new content for quite some time. Ash-Sham channel, it should be noted, was by the end of June expressing anti-JN sentiment with accusations of ‘defection’ and was the first pro-ISIS media outlet to demonstrate a real ISIS presence within Syria back in May. Ash-Sham channel was initially skeptical of reports of Abu Sa’ad al-Haḍrami’s defection. Figure 29: An ISIS billboard expressing hopes for the liberation of Jerusalem: “I and my Lord are breaking our enemy…and we coming by my Lord will cleanse [Jerusalem].” The sentiment of retaking al-Quds after the fall of the Assad regime is not confined to ISIS: it is also endorsed by Zahraan Alloush’s Jaysh al-Islam, which is seen (erroneously, in my view) as a new formation to counter ISIS.
Aymenn Jawad Al-Tamimi is a student at Brasenose College, Oxford University, and a Shillman-Ginsburg Fellow at the Middle East Forum.

1 Reply to “Musings of an Iraqi Brasenostril on Jihad: The Islamic State of Iraq and ash-Sham Billboards in Raqqa”