The intelligence circles of the enemy have recently distributed a fabricated letter attributed to the leader of Islamic Emirate in form of a statement in the several provinces and border regions of the country and as well as the adjacent tribal belt:
(Below is the letter which is being disseminated by the Americans and is falsely attributed to the leader of Islamic Emirate.)
The above fabricated letter put inside envelopes has also been given to some media outlets inside Kabul and other provinces by the Americans and their puppets. The letter states: (All the Mujahideen of the Islamic Movement should restrain their operations until the end of negotiation process in Qatar) and other such nonsense …. This action is clearly the work of the intelligence agency of America (CIA) to deceive the people and for mischievous purposes regarding which the Islamic Emirate gives the following response:
Since our cunning enemy (America, its allies and stooges) is facing frustration and have been shaken by the courageous blows of our Afghan nation, it wants to barricade itself and lower the intensity graph of the wrath and vengeance of the Afghans therefore it is relying on such fabricated and short lived lies spread through its intelligence organs in order to deceive the people. All this comes as our nation, with complete relianc e on Allah (SWT) and with religious and Afghan zeal, handed the various plots of KGB such an exemplary defeat a few decades earlier that the whole world was forever spared from the evil of Communism. The Soviets also tried to promote various lies and fabricated processes through its puppet intelligence without achieving anything tangible except awaken and alert our nation against such plots. Today, the Americans are also following the foot steps of the Soviets and are carrying out similar acts all the while the heroic Afghans are considered the masters of extinguishing such plots. The Afghan people are well aware of the policy of Islamic Emirate and the kind of leader it has, as well as the paths and people that disseminate such fabricated letters.
The Americans must unequivocally understand that the ongoing Jihad and struggle against them is the Islamic and religious obligation of our nation which is our guiding principle and it will continue as long as there is an illegal foreign presence on this soil. So it would be better for them to surrender to the aspirations of our nation and back away from their wrong policies or else they will keep wasting their efforts like the past decade and will keep leading their people towards more poverty and destruction.
The Islamic Emirate of Afghanistan shall exert even more efforts to uproot such plots of the enemy, intensify its operations against the Americans, their allies and their despicable internal supporters and will continue unabatedly with its sacred Jihad until the complete withdrawal of all the foreign forces.
Wasalm
Islamic Emirate of Afghanistan 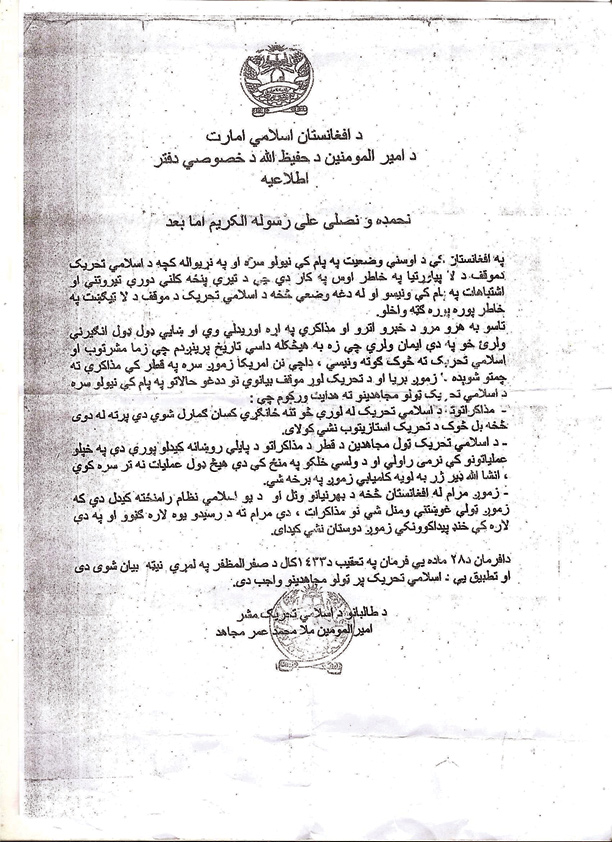