As with all guest posts, the opinions expressed below are those of the guest author and they do not necessarily represent the views of this blogs administrator and does not at all represent his employer at the Washington Institute for Near East Policy.
Jihadology.net aims to not only provide primary sources for researchers and occasional analysis of them, but also to allow other young and upcoming students as well as established academics or policy wonks to contribute original analysis on issues related to jihadism. If you would like to contribute a piece, please email your idea/post to azelin [at] jihadology [dot] net.
Click here to see an archive of all guest posts.
—
From Al-Shabab to the Islamic State: The Bay‘a of ‘Abd al-Qadir Mu’min and Its Implications
By Christopher Anzalone
Note: These are not definitive conclusions but initial thoughts. 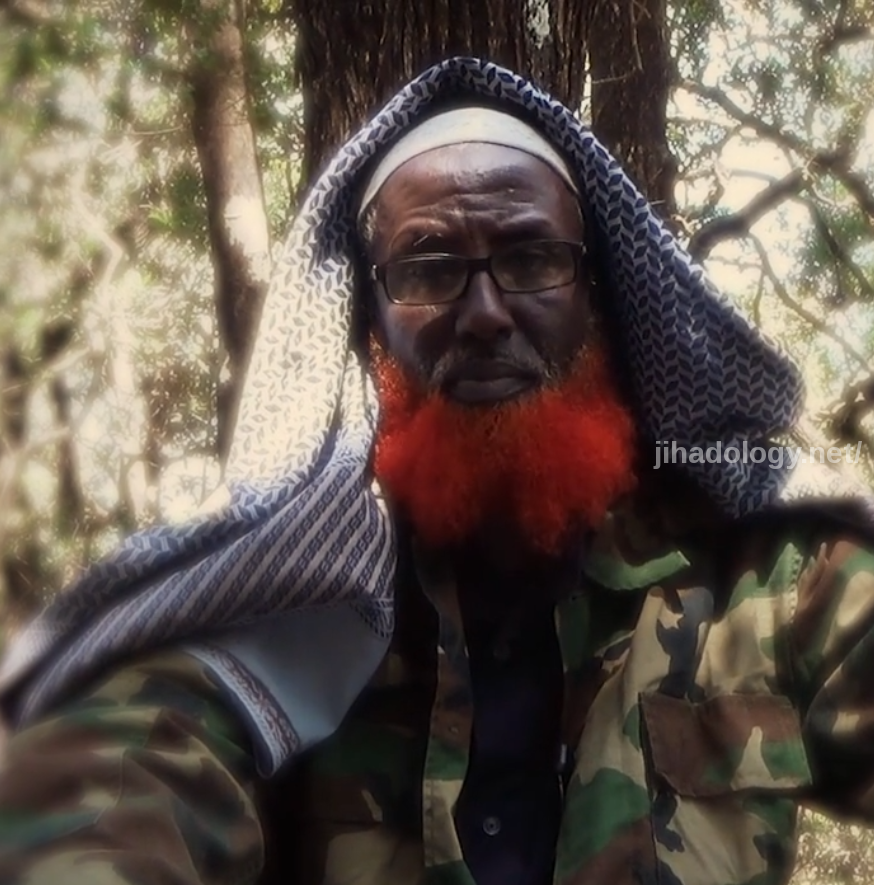 On October 22 a poor quality mp3 recording was posted online of Shaykh ‘Abd al-Qadir Mu’min pledging allegiance (bay‘a) to the amir of the Islamic State (IS), Abu Bakr al-Baghdadi, and thus switching his allegiance from the Somali jihadi-insurgent group Al-Shabab to IS.  Mu’min, a longtime Al-Shabab preacher, ideologue, and leader, created a stir among jihadis and jihadi supporters online, particularly those supportive of IS, as well as analysts.  There is no doubt that his defection from Al-Shabab to IS is of major symbolic importance in the competition between Al-Qa‘ida Central (AQC) and its regional affiliates and IS, which has succeeded in attracting pledges of allegiance from a host of groups, from Jama‘at Ahl al-Sunna li-l-Da‘wat wa-l-Jihad (“Boko Haram”) in Nigeria and Ansar Bayt al-Maqdis in Sinai to a faction of the former unified Tehrik-i Taliban Pakistan umbrella led by Hafiz Sa‘id Khan, the former TTP amir of the Orakzai tribal agency in Pakistan’s Federally Administrated Tribal Areas.  It is important, however, to keep Mu’min’s defection with a group of rank-and-file fighters from Al-Shabab’s Puntland branch in and around the Golis mountain range in perspective and not to exaggerate its immediate impact.  In this article, which is based on two long series of tweets posted a few days ago (see here and here), the symbolic importance of Mu’min’s bay‘a to al-Baghdadi and its potential impact will be examined in order to provide some additional context to the preacher’s role within Al-Shabab and shed more light on why his departure from its ranks is significant.
Mu’min, a onetime resident of London, returned to Somalia in mid-2010 and by the summer of 2011 had publicly emerged as a player within Al-Shabab, making great use of his status as a religious scholar (‘alim) and skilled preacher in giving the jihadi-rebel group an added aura of “religious” authenticity and support.  In the summer of 2011, he played an integral role in the insurgents’ outreach to local communities and clan elders at a time when Al-Shabab was facing a renewed African Union Mission in Somalia (AMISOM) and Somali federal government offensive.  Mu’min and other Al-Shabab officials, including the then-Shabab governor of the Banaadir region, Muhammad Hasan ‘Umar Abu ‘Abd al-Rahman, met with local community leaders, merchants, religious scholars (‘ulama), and poets in neighborhoods around Mogadishu in an attempt to win their support against AMISOM and the Somali government.  Mu’min was particularly active in making pitches to other ‘ulama in order to win their support.  In May 2011, Mu’min was one of the Al-Shabab officials chosen to speak at the group’s official memorial conference and ceremony for the late AQC amir Usama bin Laden.  Mu’min also was a featured speaker in February 2012 at another major Al-Shabab event, its official celebration in Lafoole in the Lower Shabelle region of the formalization of its affiliation with AQC. 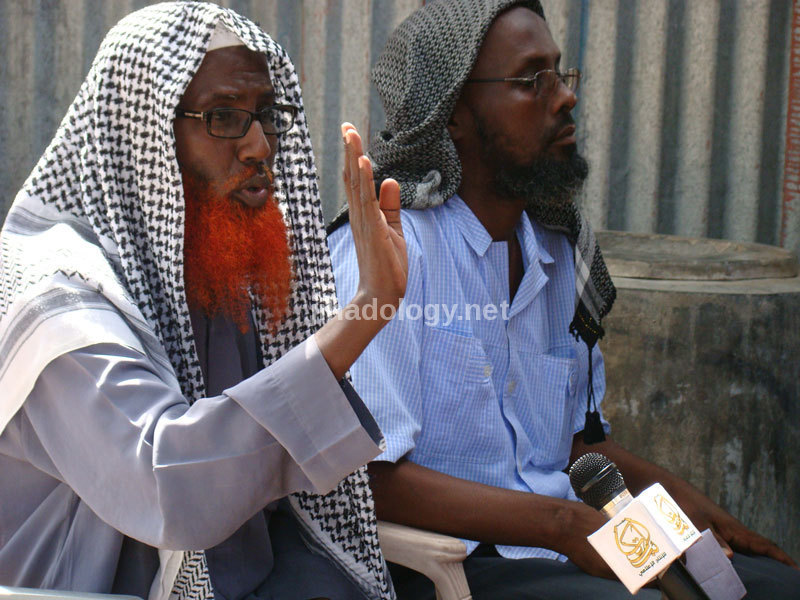 The preacher’s symbolic importance also comes from the promotion previously by Al-Shabab and its media apparatus of his lectures, including a lengthy series of lectures of his oral tafsir of the Qur’an, featured roles in a series of official propaganda films, and the promotion of his recorded remarks and statements on its radio stations.  In 2012, Mu’min relocated to Puntland where he worked to further Al-Shabab’s goals of expanding in that region.  As part of this campaign, he continued to record interviews and statements that were broadcast on Al-Shabab’s terrestrial radio stations and in 2015 he was featured in a series of official films produced by the group’s Al-Kata’ib Media Foundation.  His most recent appearances were in a series of three Ramadan lectures filmed in the Golis Mountains released in July.  Up until mid-September, he was still participating in Al-Shabab’s media operations campaign.
The exact number of rank-and-file fighters from Al-Shabab’s Puntland branch who left with Mu’min remains unknown with any certainty.  The majority of initial reports placed the number at being between 20 and 25, though other sources claimed that a much higher number of fighters, perhaps the majority of the 300 or so strong Puntland branch, had also defected with the preacher.  Although the number is important, and a higher number of defections would more greatly affect Al-Shabab logistically since it is suffering from defections of fighters who have taken advantage of offers of amnesty from the Somali government, Mu’min’s defection is still a symbolic blow to the group regardless of the exact number.  This challenge, however, while important, is not necessarily insurmountable as of this time. 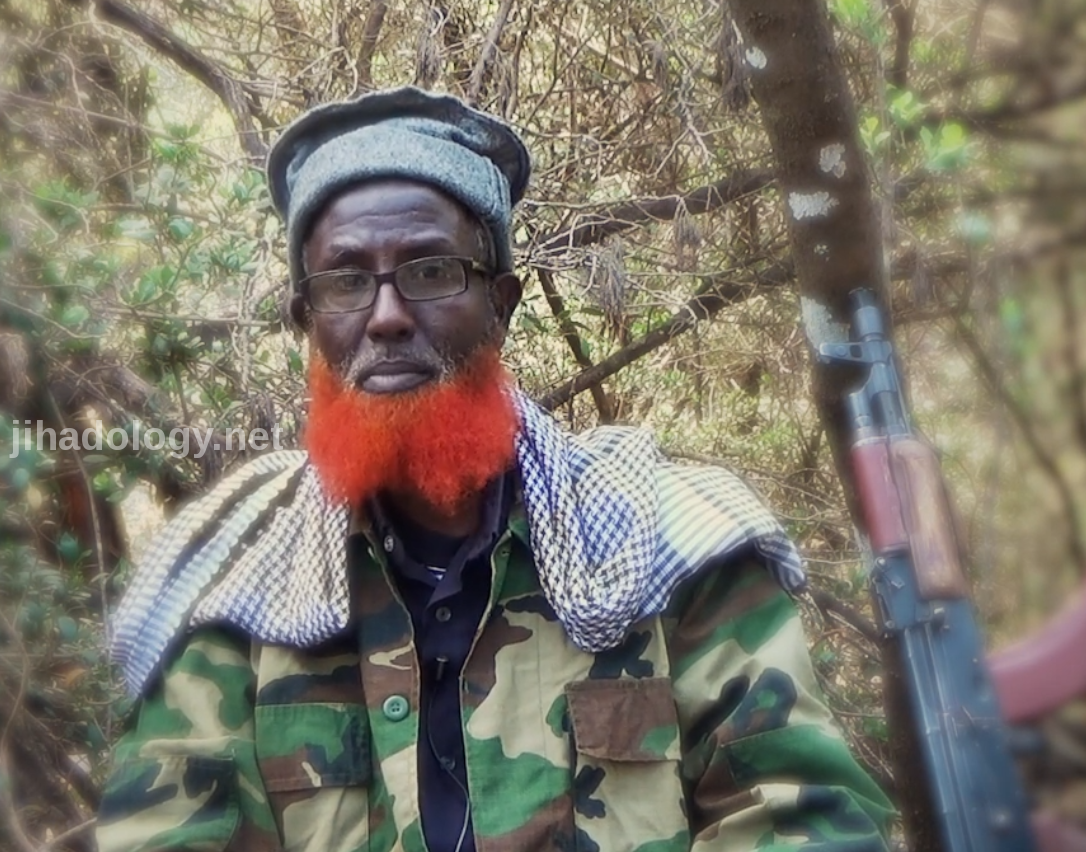 Recent signs suggest that the central Al-Shabab leadership, including regional governors, are disposed to remaining loyal to AQC amir Ayman al-Zawahiri, though they have clearly been struggling for some time about how to react to the growing popularity of IS.  The late amir of Al-Shabab, Ahmed Godane, uneasily navigated this question and ultimately decided to remain loyal to al-Zawahiri.  His successor, Ahmad “Abu ‘Ubayda” ‘Umar, also quickly reaffirmed the group’s loyalty to the AQC chief upon taking over the rebel group.  Al-Shabab was also one of the first AQC-aligned groups to eulogize Mullah Muhammad ‘Umar, the founding amir of the Afghan Taliban.  After it was made public in late July that ‘Umar had died of natural causes in April 2013, Al-Shabab organized funeral prayers (salat al-janaza) for him and continued referring to him as “amir al-mu’minin” (commander of the faithful), a title also claimed by Abu Bakr al-Baghdadi.
Al-Shabab’s media, though it has always been attracted to Abu Mus‘ab al-Zarqawi and the late Islamic State of Iraq leaders Abu ‘Umar al-Baghdadi and Abu Hamza al-Muhajir, continues to speak respectfully of al-Zawahiri.  Al-Shabab’s senior leadership has not responded publicly yet to Mu’min’s defection, but his move has been criticized by Al-Muhajiroun, a group of Swahili-speaking jihadis aligned with the Somali insurgents and particularly Ahmad Iman Ali, the Kenyan jihadi preacher in charge of Al-Shabab’s Kenyan foreign fighters coming from the Muslim Youth Centre/Al-Hijra recruiting networks in Nairobi, Garissa, and the Swahili Coast.  It also took the Al-Shabab leadership some time to formulate an official response to dissident American foreign fighter Omar Hammami in 2012, with Hammami publicly announcing his break with the group and commencing with extensive online criticism of it in March but Al-Shabab not releasing a detailed response to his allegations until mid-December of that year.  IS has yet to officially accept Mu’min’s bay‘a, though there is little question that the group’s leadership will do so because it is an economical way of projecting an image of expansion and influence without having to make any significant initial investment of resources. 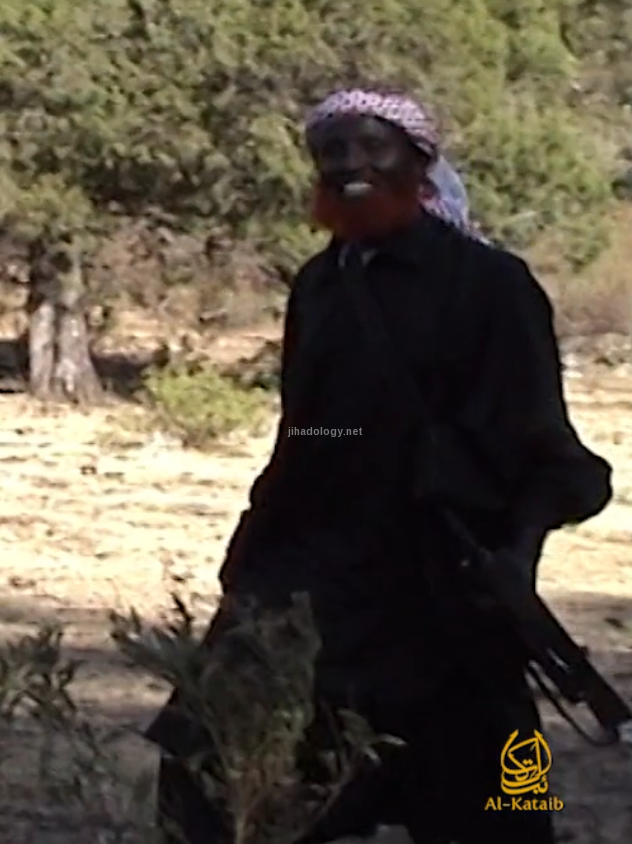 Ultimately, the medium and long-term impact of the defection of Mu’min and those Puntland-based fighters who left with him rests on future on-the-ground developments in Somalia and East Africa.  If the preacher is joined by other important figures and factions within Al-Shabab’s ranks, for example Ahmad Iman ‘Ali and significant numbers of Kenyan and other East African foreign fighters, who make up a significant number of Al-Shabab’s strength now, the balance could shift against the group’s AQC-aligned leadership.  If discord grows within Al-Shabab’s ranks, it may also enable the Somali government and AMISOM to woo away fighters disillusioned with internal infighting and violence.
Christopher Anzalone is a PhD candidate (ABD) in the Institute of Islamic Studies at McGill University.  He has published articles previously on Al-Shabab, the Kenyan Muslim Youth Centre/Al-Hijra, Al-Qa‘ida, the Tehrik-i Taliban Pakistan, the Islamic Movement of Uzbekistan,  jihadi media operations, foreign fighters, Islamist visual cultures, and the Islamic State.  You can follow him on Twitter and Academia.edu.

2 Replies to “GUEST POST: From al-Shabab to the Islamic State: The Bay‘a of ‘Abd al-Qadir Mu’min and Its Implications”